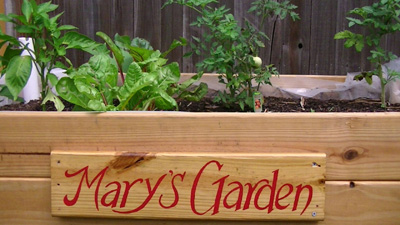 For the past few months Mary and I have been working from home rather than on the road campaigning for conservative candidates. I built a container for Mary's veggie garden. How can someone be a gardener who freaks out over the sight of a worm?

My last blood test was not good. So, I have gone rogue in my battle to defeat diabetes; totally raw food. I only eat raw salmon and tuna and hearty salads. No diary. I only drink water with lemon and black coffee. No eating after 8pm. My daily sugar level has been dramatically better. I have been on this regiment for a month and a half. After 60 days, I will go for another blood test. I covet your prayers. I figure if I can get a handle on my health, I can introduce a healthy, but more normal diet and even cheat occasionally.

There was a knock at our front door. A courier handed me a package from CCC (Conservative Campaign Committee) with a memory stick inside. "Hello Mr Marcus. Your mission should you choose to accept it is Henry Ross for Congress, Mississippi. As always, should you or any member of our CCC team be caught working to send a true Tea Party conservative to Washington, the GOP will disavow any knowledge of our actions. This memory stick will self-destruct in 30 seconds."

Okay, perhaps, it did not happen quite that way, but we at CCC proudly announce our endorsement of Henry Ross for U.S. Congress, Mississippi, District 1.

Why should you care? Folks, the only way we stop Obama and his fellow Leftist's anti-America and anti-God agenda is to replace Democrats, betrayers and spineless Republicans with rock-solid courageous conservatives; one race at a time.

Ross' bio is excellent – Former Circuit Judge, Assistant District Attorney, served in the U.S. Navy, was a member of the Navy JAG Corps, was an appointee to GW Bush's Justice Department and graduated from Ole Miss.

Far too many GOP candidates are obsessed with trying to prove to the mainstream media that conservatives are not that bad, willing to compromise and play nice with Obama and the Democrats.

What sealed the deal for me to support Henry Ross was his boldness in stating who he is, what he believes and his intentions when elected, "...bring us back to God centered limited Constitutional government, where we have rights, but we have responsibilities – responsibility to our nation and to our families. But government has responsibilities to us to follow the Constitution and not bankrupt the country." http://bit.ly/1aGCRw2

Patriots, please join us in helping Henry Ross win the GOP primary and the runoff. http://eepurl.com/bkb5Tb Time is short. The GOP primary is May 12th. The special election runoff is June 2nd.

Henry, thanks brother for stepping up. Let's get behind him folks. Go Henry Ross for Congress!