December 15, 2015
My 87 year old black dad is a baby conservative. After several years of me printing out my articles and mailing them to him, Dad finally realized his loyalty to Democrats was not only misguided, but was actually destructive to blacks. Thus, I have become Dad's Conservatism coach. 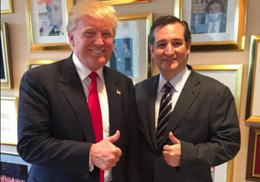 He phoned me with a chuckle in his voice, "What do you think about Donald Trump?" Dad was referring to Trump's comment about restricting Muslims from entering our country for awhile.

Despite my efforts to guide him to conservative media, Dad still gets his news from the MSM; a fan of Don Lemon at CNN. Consequently, Dad has been taught by the MSM that all opposition to Leftists implementing their liberal socialist/progressive agenda is racism or hate.

While on the stepping machine at the gym, one of the TVs was on CNN. CNN featured numerous panel discussions purposed to portray Trump as a racist ignorant SOB for suggesting a temporary ban on Muslims entering our country. The truth is there is historical precedent for Trump's proposal. http://bit.ly/1ORtyKT It is a common sense precaution to protect Americans. Still, the MSM foolishly hoped Trump's Muslim ban proposal would be the final nail in his presidential hopeful coffin.

I told Dad that despite the MSM's best efforts to destroy Trump, his poll numbers continue to skyrocket. http://bit.ly/1IH4xkt

I offered Dad a parable. Imagine that you were starving. A gruff burly un-bathed biker comes along and gives you food. You would ignore the biker's rough-edges and foul odor, right? Dad said, "Yes, I would say praise the Lord." I said, "Dad, the American people are starving for a renewal of America's greatness." I recited a list of Obama's lies and anti-American policies. I informed Dad to how voters have been betrayed by Republicans, reneging on their vow to push back against Obama's lawless implementation of his socialist/progressive agenda.

So along comes Donald Trump promising starving Americans a feast of renewed American greatness. Starving excited voters with forks in hand ready to eat, crossing all demographics, have taken a seat at Trump's table. I explained to Dad that Ted Cruz is Donald Trump without the slightly unpleasant smell. Please do not get me wrong folks. I am not dissing Trump. I am merely interjecting a bit of humor. I would enthusiastically give Trump my vote if he became the GOP presidential nominee.

All I am saying is Ted Cruz is a true conservative who offers all the boldness, fearlessness and promises of Trump but with presidential gravitas and moral authority.

Confronting the arrogance of Obama's AG Loretta Lynch, Cruz has once again proven he will take no prisoners when standing up for liberty and the American people.

In a nutshell, despite the most recent Islamic terrorist attack in San Bernardino in which 14 Americans were murdered, Lynch has decreed that she will throw anyone in jail who dares to speak badly about Muslims.

The first of several outrages that popped up in my mind is how Lynch and Obama have ignored Black Lives Matter's bold clarion call to blacks to kill cops and crackers (white people). http://bit.ly/1Kzm6Uf Hundreds at a BLM rally marched down a NY street chanting, "What do we want? Dead cops! When do we want them? Now!" http://bit.ly/1GNXUHV

"We see Loretta Lynch, the attorney general, promising in the wake of this terrorist attack – does she come out and say, 'We're going to track down the terrorists and kill them'?

No, she says prosecute anyone that has the temerity to stand up and speak against radical Islamic terrorism.

"Mr. President, there is not a moral equivalence between radical Islamic terrorists and Christians and Jews.

One has a philosophy from day one of murdering those who they consider infidels; the other preach love and forgiveness and standing together as one humanity.

And let me say beyond that in the United States, we will not enforce Sharia Law.

And Madam attorney general, if you wanna come prosecute me for executing my First Amendment rights, come and get me, I'm right here!" http://bit.ly/1IY2Utj

Folks, if that doesn't get your blood going and have you standing up and cheering, nothing will. Cruz's rant was bold, and yet, dignified, morally straight and presidential.