Lloyd Marcus
Is a Christian in the White House a negative? 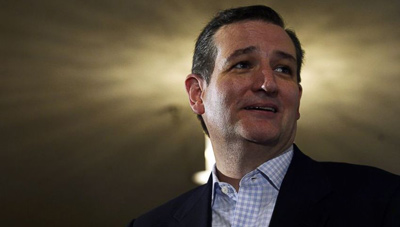 Folks, America has come a long way baby negatively. An irate woman called a major radio talk show regarding Ted Cruz, "The last thing I want is a president wearing a fish (symbol of Christianity) on his back!" I pray that those who share this foolish woman's prejudice are a minority.

Christianity played a huge role in the founding of our country. Empowered solely by their incredible Christian faith, the Pilgrims (also known as saints and separatists) courageously sought a land where they could worship freely. These incredibly brave people had no idea what to expect regarding their journey nor life in the new world. America was built on the unique idea that our freedom comes from God; individual liberty and freedom rather than being ruled by a monarch.

Amazingly over 200 years later, the left has been allowed to move our country closer to what we escaped; ruled by a tyrannical government; mandating our every action. Things have gotten so far out of whack that idiots (I'm sorry) view faith in God as a negative.

So this woman who called the radio show is horrified of having a Jesus dude in the WH. Well here is who we have now occupying our Oval Office.

Our president is a morally bankrupt narcissist who places his socialist/progressive extremist agenda and his legacy above the lives of Americans. Obama's illegal open border policy to recruit new Democrat voters has caused the rape and murder of Americans. http://bit.ly/1eDvffF Our kids are contracting strange diseases from illegal alien students that Obama demanded our schools take in. http://bit.ly/1E4V4xL

Obama crammed Obamacare down our throats against the will of a majority of Americans. Cancer patients lost their life-saving doctors due to Obamacare. http://bit.ly/1QdYVLK Obama's death panels decide who gets surgery or pain pills until they die. Rest assured, whether or not the patient is a registered democrat will creep into Obama's death panel's decisions. http://bit.ly/1GrLrb6

A guy at a big box hardware store was in a cast, moving with great difficulty. He was slowly gathering lumber for a project. I asked, "Excuse sir. Why on earth are you here?" He replied, "I have to work. My Obamacare deductible is $5000."

While repeatedly impugning Christians http://bit.ly/1ThcIaV, Obama favors Islam and has instructed his DOJ to jail Americans who dis Islam http://bit.ly/1mxTG1G; a religion which suppresses women and kills homosexuals and non-believers. http://bit.ly/241Sqpy

Most Americans are clueless regarding Obama's daily assaults on our freedom, liberty and the best interest of America and her people. http://bit.ly/1qVYZGO

But this woman on the radio says, no, no, no, we cannot have a Christian in the WH. Well I say a Christian is exactly what America desperately needs; not someone who says they are Christian when it is convenient. We need a real-deal washed-in-the-blood-of-Jesus-Christ Christian running our country.

"For we wrestle not against flesh and blood, but against principalities, against the rulers of the darkness of this world, against spiritual wickedness in high places." Ephesians 6:12

In other words, the battle to restore America is spiritual. This is why "everything" the left/Democratic Party seeks for America is anti-God and undermines the biblical rock-solid foundation upon which our unique extraordinary nation was built. This also explains those who instinctively hate Ted Cruz.

For example: Democrat presidential contender Bernie Sanders, in essence, wants everyone on government welfare. This is evil folks; destroys human potential. I witnessed this in my black family. My late cousins (five boys and a single mom) lived their entire lives on welfare. Two sons broke free. One achieved remarkable success. Only one son is alive today living in a nursing home. He never had a job in his life. He had God given gifts and talents undeveloped or pursued. This is Sanders vision for America, government providing everything. Evil.

It is not surprising that Sanders despises Capitalism because it is Christian.

"Capitalism is Christian because it incentivizes people to do the most with their skill, talents, gifts, etc,; it distributes goods and services far more effectively and fairly than government ever could; and the accumulation of wealth that it produces actually leads to more effective charity – voluntarily given – than government could ever force." http://bit.ly/1QcqaGx

Another sign that we are engaged in a spiritual battle to restore America is the left's irrational support of Islam vs its hate for Christians.

If Sharia Law ever took over America, Madonna, Beyonce, Lady Gaga and others could not be who they are. Islam vehemently opposes everything these liberal entertainers stand for. Homosexuals would be punished and probably killed. Women who do not toe the Muslim line are raped, even killed. Christianity attracts non-believers with love and does not condone killing non-believers as does Islam. So what gives? Why do leftists celebrate, respect and highly praise Islam while dissing Christians at every opportunity?

The left's wickedness is manifested in its repulsion with traditional principles and values and its hatred for Jesus. How dare Christians believe that Jesus is the only way to heaven. The Democratic party which claims to represent the mainstream welcomes with open arms all who despise the God of Christianity and all things wholesome and good.

America desperately needs a hero folks. And that hero is a Christian, Ted Cruz.