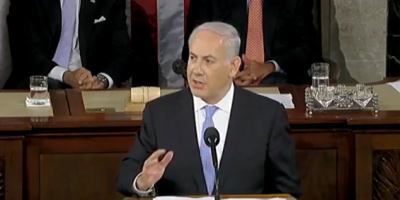 Israel's Prime Minister, Benjamin Netanyahu, spoke before a joint meeting of the United States Congress on May 24, 2011, to address the ever eluding peace between the State of Israel and the Palestinians — and frankly, to set the record straight, after President Barack Obama's controversial speech on May 19, 2011 regarding U.S. Policy in the Middle East and North Africa.

The Prime Minister offered the following statement to explain the essential impediment to peace:

Netanyahu received multiple standing ovations. The only time that opposition was heard was from a loud female heckler — who was quickly removed, according to news reports. Yet, the Prime Minister seized the moment by calling it a "badge of honor" that such a protest could take place in a free and democratic society like the United States — something that could never happen in the "farcical parliaments of Tehran or Tripoli." Prime Minister Netanyahu expressed his desire to find a lasting peace with the Palestinians, even though he would be making painful compromises, which he described as not being easy for him. These compromises would include giving up parts of the ancestral Jewish homeland. He added that in "Judea and Samaria the Jewish people are not foreign occupants... this is the land of our forefathers."

At the same time, Netanyahu offered his vision of the Palestinian state:

"But there is another truth: The Palestinians share this small land with us. We seek a peace in which they will be neither Israel's subjects nor its citizens. They should enjoy a national life of dignity as a free, viable and independent people in their own state. They should enjoy a prosperous economy, where their creativity and initiative can flourish."

"Why has peace eluded six Israeli prime ministers?" asked Netanyahu. "Because so far the Palestinians have been unwilling to accept a Palestinian state, while accepting an Israeli state along side it."

Prime Minister Netanyahu, described his own personal experiences as a soldier battling terrorists — a personal history which includes the death of his brother. He described how Palestinians "continue to educate their children to hate... to name public squares after terrorists." Netanyahu said that this type of rhetoric must come to an end.

In between standing ovations, Netanyahu stated that Mahmoud Abbas (the President of the Palestinian National Authority) must stand before his people and say the six words that will change history:

""I stood before my people... and I said... "I will accept a Palestinian state." It is time for President Abbas to stand before his people and say...

"I will accept a Jewish state"

It is clear that Netanyahu will not approach the peace negotiations unless President Abbas recognizes the State of Israel.

Israel's compromise involve additional conditions that would reflect the dramatic demographic changes that have occurred since 1967. Netanyahu emphasized that under any realistic peace agreement, those areas, as well as other strategic areas must be examined. His view of a real peace agreement would have to include settlements that will become the subject of careful negotiations. Prime Minister Netanyahu added: "... as President Obama said, the border will be different than the one that existed on June 4, 1967. Israel will not return to the indefensible boundaries of 1967." One must assume that Netanyahu is referring to the statements made to him by President Obama during their meeting at the White House (following Obama's controversial speech on May 19) — and Obama's "clarification" speech before AIPAC (the American Israel Public Affairs Committee) on May 22, 2011 — where President Obama placed emphasis on the caveat of mutually agreed land swaps. 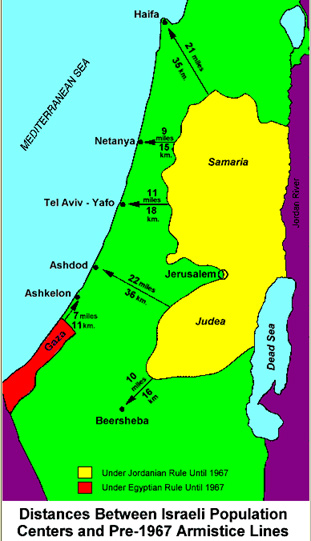 Prime Minister Netanyahu addressed the conflict over Jerusalem, and reminded the world that "only a democratic Israel has protected the freedom of worship of that city." He stressed that Jerusalem must never again be divided and that it must remain the united capital of Israel. The Prime Minister said that "creativity and good will" are essential so that peace can be found; however, he emphasized that "the only peace that will hold is a peace you can defend." 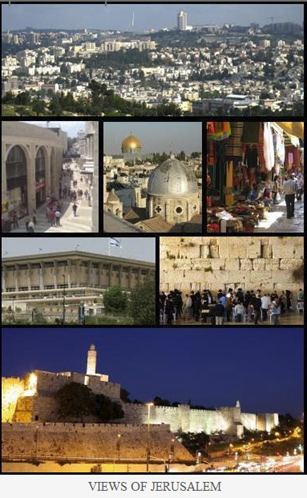 Netanyahu presented his audience with a 'reality check' — by describing how Israeli citizens have less than 60 seconds to seek shelter from incoming rockets. "Would you live that way?" he asked, "well, we will not live that way either." 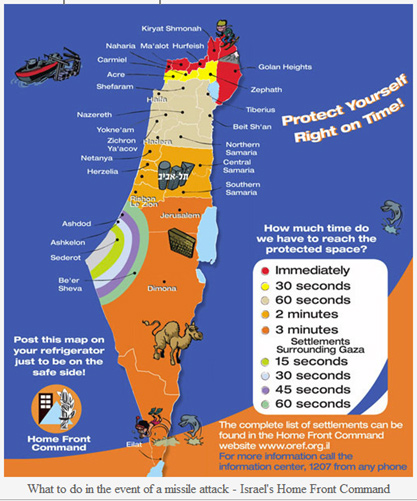 In a smart move, Netanyahu sent a message to Washington, by saying that "there is an America beyond the [Washington DC] Beltway." In other words, that Israel has the support of the American people.

But the support of Israel would have to include the demands of Israel — which call for a Palestinian state that must be fully demilitarized, and that Israel maintain a military presence along the Jordan River — an important aspect of the peace agreement, and "necessary to protect Israel in case the peace unravels."

Israel is prepared to make peace with the Palestinian National Authority. But Israel "will not negotiate with a Palestinian government backed by the Palestinian version of Al-Qaeda" (Hamas) — added Prime Minister Netanyahu.

Netanyahu stated that peace cannot be imposed. It must be negotiated with partners committed to peace. He reminded the audience that Hamas is not a partner in peace. That Hamas is committed to the destruction of Israel, by urging its followers to "kill the Jews everywhere you find them." 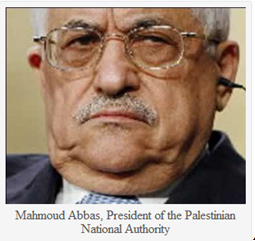 As far as the President of the Palestinian National Authority, Mahmoud Abbas, is concerned — this is what Prime Minister Netanyahu had to say:

"Tear up your pact with Hamas."

"Make peace with the Jewish state."

Netanyahu affirmed that Israel "would be the first country to welcome a Palestinian state as a new nation" — given that the above conditions are met.

At the end of his speech, Prime Minister Netanyahu reminded Americans that "Providence has entrusted the United States to be the guardian of freedom" — and that, "among the most grateful nations, is the nation of Israel." He thanked the United States for its "unwavering" support.

Prime Minister Benjamin Netanyahu has appealed to the Palestinian National Authority by setting forth the necessary conditions that can lead to peace. But nothing was more important than Netanyahu's invocation of God, as the Highest Authority, as well as the country that holds the key to the survival of Israel.