Marielena Stuart, Republican Candidate for the United States Senate 2012, from the Great State of Florida

With Endorsement by the Honorable Robert K. Dornan

THE PRIVILEGE TO SERVE 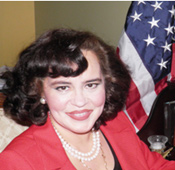 I love America. My adopted country opened its doors to me and my family so that we could walk into the greatness of its freedom and its founding values.

Every time I look at our beautiful flag and place my hand over my heart for the Pledge of Allegiance and sing our National Anthem, I am reminded of our nation's promise to all her citizens — as the land of the free and the home of the brave.

Yet freedom is never really free, is it? It always comes at a great price.

Does not each successive generation of Americans have to pay the price for due diligence in order to secure these treasures for ourselves and our posterity?

Is it not time that every American ask — what will our legacy be to the next generation?

I have asked myself this question and frankly, I don't like what I see happening to our beloved country. My candidacy is in part a response to the great challenge before us.

America stands at the raw edge of a great precipice. We see an ever expanding impersonal government that spends money it does not have, and passes laws that are blind to the Law-Giver. It is devouring all that is good and honorable.

As your Senator, I pledge to do my utmost to take any and all actions directed at curbing this nation's current fiscal crisis. I will strive to articulate the economic needs of Floridians within the framework of a smaller government that supports private sector growth, job creation and lower taxes.

Florida is a state blessed by God in so many ways. Not just for its beauty and natural resources, but more importantly, for its wonderful people — many of whom have come to America, like my family did, in search of freedom from tyranny and want. In search of a dream for themselves and their families.

All Floridians deserve the opportunity to follow their dreams — without the threat of a bloated federal government that taxes them excessively while taking away their sacred rights, including the right to life, which is granted to them by God — and secured by our Constitution.

The family, which is the building block and foundation for a civilized society — is under attack. The family existed from man's beginning — before the creation of the State and the Church. We need to support legislation that is pro-family — and vigorously oppose legislation that endangers the family.

Abraham Lincoln was inspired by the Founding Fathers who preceded him, as he fought for unity and strength. The danger that Lincoln faced then is once again before us. We are becoming a fractured nation. In this present crisis we must pull together — or we will fall apart.

We need leaders in Washington who will have the strength of character and the will to succeed in rebuilding our nation — not just economically, but morally as well. This is why I am presenting my candidacy for the United States Senate.

I have been called "the original Tea Partier" — and I must say that my many years of experience in the United States Congress taught me to discern what a true conservative really is.

As I examine the present state of our nation and the critical need for strong candidates that can carry forth our conservative values, both morally and fiscally, I cannot think of a better American, and a better leader than Marielena Stuart, to represent the Great State of Florida in the United States Senate, after winning next year's election.

Marielena Stuart is a freedom fighter and a patriot.

Together with her family, Marielena opposed and survived the ravages of Communism under Fidel Castro. From an early age she learned to defend her God-given rights, while members of her family were imprisoned, tortured, and executed. Marielena Stuart knows the price that is paid when freedom is lost. She knows, first hand, that a socialist leaning government has a devastating effect on economic growth and job creation.

As socialism grows in our government our individual freedoms are being taken away. This is why Marielena believes in open and transparent economic development. She believes that less taxes and a strong private sector are the best ways for America to regain its economic strength.

Marielena is a wife and a successful homeschool mother. She has a firm conviction that now — more than ever — we must instill a sense of pride in America, so that our youngest citizens can grow up with a clear understanding of our sacred rights given to us by God, and protected under the United States Constitution.

Marielena Stuart is a solid pro-lifer. She has never been afraid to defend the right to life with an uncompromising strength in her own community and her State — and through her nationally-read columns.

In 2010-2011 she was immensely influential in helping defeat the establishment of an anti-life genetic facility in Southwest Florida, a project which was backed by powerful land developers and government bureaucrats. She fought in defense of the human embryo, the tiniest of our kin, and in doing so Marielena Stuart also helped save Florida tax payers hundreds of millions of dollars.

Her success in this grass-roots battle reflects Marielena's determination to give Florida citizens the right to be heard in the public square — citizens who have long been silenced by political backroom deals and bail-outs.

As a columnist for Renew America (http://www.renewamerica.com/columns/marielena) Marielena Stuart has demonstrated her expertise in foreign affairs, national defense and strategic military matters — especially those dealing with China-U.S. relations. Marielena is a powerhouse of important information on vital national and international issues. Her writings also reflect her conservative values, and her love for America.

Like me — and all true conservatives from George Washington to Ronald Reagan — Marielena Stuart believes in "Peace through Strength."

I promise you that, as your U.S. Senator, Marielena Stuart will lead and unite the State of Florida and the nation. Hers is a vibrant message and commitment to life and prosperity for every Floridian, and for every American who wishes our country to remain — One nation UNDER GOD, indivisible, with liberty and justice for all — born and unborn.

Marielena Stuart embodies the perfect conservative storm that Florida citizens need to deliver to our nation's capital in 2012. She needs and deserves your financial support and your vote.

Thank you and God bless.