Marielena Montesino de Stuart
Karl Rove is not the problem. Let me tell you why... 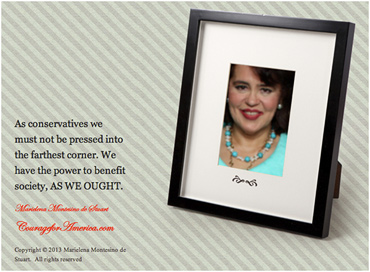 Karl Rove is not the problem

We all know that Karl Rove is a man who puts power and money before principles – and he does not hide it. At least you cannot accuse him of trying to cover-up his true colors. Such is not the case with other chameleons posing as "conservatives."

My candidacy for the U.S. Senate 2012 (FL) as an authentic conservative Republican (social and fiscal) who never ran for office before – turned into a Herculean effort to overcome the roadblocks, opposition or wall of silence placed before me, by groups and individuals who claim to be "conservative" Republicans. In spite of this, I was able to raise enough money to intensely campaign throughout Florida for an entire year – and to qualify as one of four candidates on the ballot.

My experience on the campaign trail showed that there are very few authentic conservatives – and they certainly are not connected with the GOP establishment. Of course, anyone who is a Republican these days claims to be "conservative."

If we had so many conservatives, our nation would not be in such a deplorable social and fiscal state.

This farcical claim to conservatism has reached such a scandalous level, that there are true conservatives who are afraid to be associated with the "other conservatives." 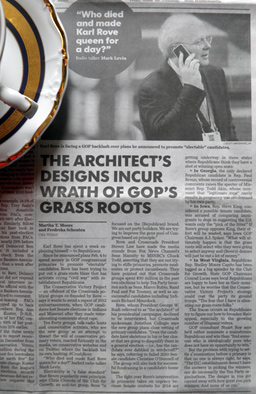 Reflections on my cup of coffee

This morning, as I was drinking my cup of coffee and catching up with assorted news items, I reflected on an article published by USAToday titled, The architect's designs incur wrath of GOP's grass roots (captioned above). The article begins with a quote by radio talk show host, Mark Levin. I must say that – while Levin may have supported certain candidates in the past that were perceived as conservatives – my experience showed me that he failed miserably with his endorsement during the U.S. Senate Primary 2012 in Florida. His endorsed candidate eventually dropped out – not because he lacked money – but because he could not present a true contrast against the liberal Democrat incumbent. I contacted Mark Levin both in writing and by telephone, after listening to him say on the air that the candidate he endorsed was "the only true conservative" in the U.S. Senate Primary in Florida. The abrupt assistant who answered the phone at his radio show told me that Levin was not interested in speaking to any other Republican candidate in the U.S. Senate Primary race in Florida. My letter to Levin went unanswered. His actions left much to be desired – and disappointed many who were long-time listeners of his show.

Club for Growth and its president, Chris Chocola, are also mentioned in the USAToday article. Chocola's statement – that electability is "a false standard" that favors popularity over principle – is not representative of Club for Growth's actions. Chocola went on to say that his club "is trying to improve the gene pool of Congress based on principle."

My personal experience with Club for Growth is that it absolutely puts money before principles. When I contacted Club for Growth as a very hard-working authentic conservative grassroots Republican candidate, I was asked to raise a minimum of $500,000 before Club for Growth would even consider me, in spite of my strong positions on the economy, national security and foreign policy – and in spite of having received a prestigious endorsement from Republican Congressman Robert ("B-1 Bob") Dornan (Ret), one of the most conservative voices ever heard on Capitol Hill.

When I insisted that I was a principled candidate that would not follow political expediency, I was again asked to raise $500,000 in order to be considered viable. So much for principle before popularity. I have to assume that my pro-life without exceptions – and my pro-traditional marriage positions, did not make me "viable" in the materialistic environment of Club for Growth. Mr. Chris Chocola should be more careful with the statements that he is giving to the press. Some of us with experience are watching and listening closely.

There are many other groups, not mentioned in the USAToday article, who also claim to be "conservative." These groups say that they stand for principle over money – but their actions do not reflect their words. Donors beware.

My recommendation remains the same. Public policies must be based on the Commandments of God and the Natural Law – which binds all men, for all time and in all circumstances. This is the only authentic conservative path that will lead to the urgent protection of our right to life, freedom, property and happiness. Anything else is charlatanism, greed – and a disguised desire to simply be in control of the big government that is forcing our nation into a Socialist abyss.

Karl Rove is not the problem. As conservatives, our problem is the enemy within.