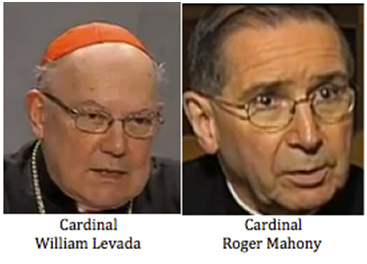 Cardinal William Levada has addressed the media in the San Francisco Bay area and allowed more of his modernist opinions to drip. Levada is another impostor who will join the 2013 Conclave in Rome for the election of a new Pope.

Cardinal Levada defended Cardinal Roger Mahony's participation in the 2013 Conclave, in spite of the storm of protests surrounding Cardinal Mahony's horrendous cover-up of pederasty and other forms of sexual abuse, in the Archdiocese of Los Angeles. Reference: http://www.renewamerica.com/columns/marielena/130223

Levada's arrogant statement to the media adds insult to injury, in light of the crimes covered-up by Mahony:

"There are some victims groups for whom enough is never enough, so we have to do our jobs as best we see it," said Levada, 76, who spoke with reporters from a Menlo Park seminary as he prepared for his trip to the Vatican for the papal conclave.

"He [Cardinal Roger Mahony] has apologized for errors in judgment that were made," Levada said. "I believe he should be at the conclave." – Cardinal William Levada, ABC News / Associated Press.

As you read the following full coverage from ABC News and the Associate Press, pay particular attention to Cardinal Levada's shameless attempt to put a distance between the incidence of pederasty – and the homosexual culture that has been openly embraced by the modernist hierarchy of the Roman Catholic Church: http://romancatholicworld.files.wordpress.com/2013/02/cardinal-william-levada-abc-news-san-francisco-regarding-levadas-support-of-cardinal-mahonys-participation-in-the-2013-conclave.pdf

Cardinal William Levada, who served as Archbishop of San Francisco, was relocated to Rome to succeed Cardinal Ratzinger (Benedict XVI) as Prefect of the Congregation for the Doctrine of the Faith. Later, Benedict XVI also elevated Levada to Cardinal. Levada retired as Prefect of the CDF in July, 2012.

In May, 2011 I published the following article – questioning Levada's honoring of Ave Maria University (where he was honored in return). In my article I also questioned Levada's tolerance of the homosexual culture in the Church – including the institutionalization of openly-Gay parishes and ministries. As Prefect of the Congregation for the Doctrine of the Faith, it was Cardinal William Levada's DUTY to make sure that such desecrations did not take place. Reference: http://romancatholicworld.wordpress.com/2011/05/07/highest-ranking-u-s-cardinal-in-roman-curia-honors-school-which-committed-unlawful-act/

They see no evil, they hear no evil and they speak... out both sides of their mouths

It is important to note that while these Catholic Church officials condemn homosexual marriage, they either endorse or turn a blind eye to openly-Gay parish activity and gay ministries. Cardinal Ratzinger was Prefect of the Congregation for the Doctrine of the Faith from 1981 until he was elected Pope in 2005. Openly-Gay parishes and ministries not only continued their activities, but actually flourished during the 24 years that Ratzinger was in charge of the CDF.

Is it a mere coincidence that in the Catholic Church there is a parallel between the growing presence of the homosexual culture and the incidence of pederasty?

It is not surprising that these modernist Roman Catholic Church officials have failed to protect so many children from sexual predators inside the Church – and have covered up the incidence of pederasty and other sexual crimes, in violation of the very positions that they have held at the Vatican and throughout the world.

There goes the Conclave

The impostors that will walk into the Sistine Chapel will turn the 2013 Conclave into a masquerade. It is the duty of all faithful Roman Catholics to oppose the participation of such impostors, in order to protect the legitimacy and sacred character of the Conclave that will elect the successor of Saint Peter.