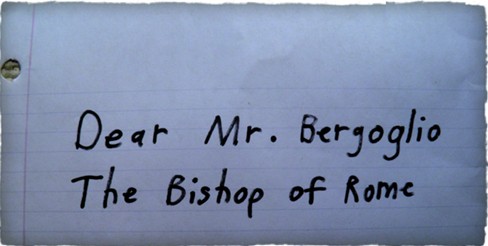 I am a 7 year-old boy living in the periphery. My mother told me to use that word because a neighbor told her that's a word you like.

Is that true, Mr. Bergoglio?

My mother, my little sister and I would love to live in that palace. Here in the periphery we are constantly surrounded by people. Staying at the Apostolic Palace would give my mother a break. I wish I could live there! Please let me know, as soon as possible.

I don't really understand a lot of other stuff that's happening since you were elected, and my mother said she is sick and tired of my questions, so she told me to write to you directly.

Mr. Bergoglio, I was baptized, but I have not received Holy Communion yet. Do I have to? In my poor neighborhood everybody is saying that under your new program anybody who is good can go to Heaven. I want to know, because my father died and I'm sure that he is in Heaven and I want to see him again.

But I don't want to have to go through all the trouble of studying the Catechism, if I can go to Heaven by just taking out the trash for my mother and not sneaking into the train without paying. This is also good news for my friends Habib (he is Muslim) and Hu (he is Chinese and his parents say they don't believe in anybody)... that they can come to Heaven with me too. Thank you, Mr. Bergoglio, for opening your Church to everybody.

I'm going to let everybody I meet know about your great new program.

I've called it "Heaven without Hassles."

Wow... that is really great!

I'm just worried about something:

Do you think that Christ is going to be OK with your new program?

Are you sure you are allowed to do this?

I'm just a little worried that... what if Habib, Hu and I end up being rejected from Heaven, and your program doesn't work, and we end up in hell?

Please send me a written confirmation that your program is REALLY going to work. My mother said I can't promote "Heaven without Hassles" without your permission, because I would be committing heresy – and she said that heresy is REALLY bad.

But why is it heresy if I promote it, and not if you do?

My mother asked me to ask you to notarize your confirmation, because she said that there is a lot of funny business going on at the Vatican, and she wants to make sure you understand that this is important.

My mother also said that you said that there is a Mafia inside the Church that's using a pastel color, like the dress that my 3-year old sister wore to a birthday party.

Are you going to do something about this Mafia?

I heard that you want 8 guys to take care of that Mafia.

Also, Mr. Bergoglio, I don't understand why you need 8 guys to take care of that Mafia. Don't you have enough power to do this yourself? The other day my mother chased three bad guys down the street and made sure they'd never be back. Why can't you do the same thing?

My mother won't let my little sister wear that dress anymore – and she took the crayon with that color from my box, because she doesn't want people to think that we are connected to that Mafia. Can you get rid of that Mafia yourself? I want my crayon back – and I don't want to wait anymore.

I don't know very much about money, because we don't have any. But I know that if we had some, my mother would not be complaining about it all the time. I heard that you don't care about money, and that you want "a poor Church for the poor."

But how are you going to help us, if you turn the Church into my neighborhood?

My mother always takes us into the beautiful Catholic churches where we can pray and see beautiful statues and paintings that honor Christ and the Virgin Mary. It gives us hope, because in our poor neighborhood we don't have beautiful things to look at. My mother calls it inspiration. My mother also said that many people, from poor to rich, gave money to build these beautiful churches to honor God. Don't you appreciate that? I do.

On Sunday, my mother puts on earrings and a necklace and she looks very pretty. She dresses us with our nice Sunday clothes, and no one knows that we are poor. She calls it dignity.

Why is it that you want this "poor Church for the poor"? Are you going to get rid of all the beautiful things inside the Catholic Churches?

We are scared about that in the periphery.

My mother won't go into modern Churches, because my little sister and I get confused. They look like places where you bury the dead. One day we spent 30 minutes just trying to figure out where the altar was. Then a man came out wearing a tropical shirt and he said he was a priest – and told us that they were going to start Mass, but it was a show with people dancing. Really weird stuff. My little sister started dancing too, because she thought it was a party, and my mother got mad and we left.

Also I heard that you don't care about those bright red shoes that popes wear.

Can I have your red shoes, since you don't want them, anyway?

I could really impress my friends.

Also, that beautiful gold cross that you don't want to wear. Can I have it and give it to my mother? Here in the periphery (did I spell that correctly?) we could really use a beautiful cross. We are tired of plain stuff – and not having anything beautiful to look at on our walls when we pray.

Also, that nice fancy cape that you don't want to wear. I want it too. I could use it to impress my friends and act like I'm the real Pope.

I hope you will read and answer my letter. You know where to find me.

Paolo from the Periphery

Someone has to say the truth... ♔