Marielena Montesino de Stuart
It was a short papacy... but it was fun
A satirical view of the modernists in the Vatican... or how to "flip the tortilla" 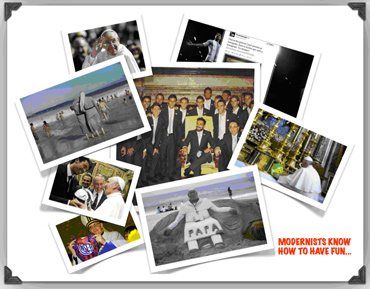 Shame, shame, shame... on those stiff, traditional Catholics, who criticized World Youth Day and its location. It is this writer's opinion that Copacabana Beach was theperfect place for the Vatican modernists to show us how to promote the "new" evangelization, or as "Pope" Francis has said – how to "flip the tortilla." (Don't miss the tortilla video below).

World Youth Day in Copacabana Beach: just a delightful day at the beach, no formalities – and God forbid... no Traditional Latin Mass. No, no, no!

World Youth Day in Copacabana Beach: no discussions about serious stuff like abortion, euthanasia or homosexual "marriage." No, no, no!

So much fun in fact, that Bishops participated in a dance led by a popular Brazilian TV personality, dancer and choreographer who goes by the name of "Fly."

WARNING: The following YouTube video link contains offensive images: Here is "Fly" in February 2012 performing in a drag queen act at Blue Space. Blue Space is described by Fodor's as one of the largest gay nightclubs in São Paulo.

"Fly" appears to be very enterprising. He also "gives lectures and tips on education and financial management" – through Sai do Buraco.

Undoubtedly, World Youth Day 2013 was a great way for the modernists in the Vatican to display their "new" evangelization – plus it gave the Bishops the opportunity to dance with "Fly."

Roman Catholics no longer have an excuse to claim that they are confused.

It's all out in the open – and Catholic hippies, lovers of relativism, homosexuals, "intellectuals," Communists, believers in the "Church-of-What's-Happening-Now," disordered architects of modernist churches and materialistic opportunists, are in absolute ecstasy.

You see, it's all about "social justice" (code word for socialism). Ah yes, that same "social justice" that was inflicted upon the people of Cuba in 1959 – and almost 55 years later Cuban citizens cannot even swim in the best beaches or enter major hotels (tourism apartheid) – except when their services are needed for sexual tourism, because "the best" is exclusively reserved for the international visitors, who help line the pockets of Castro's murderous Communist dictatorship.

Yes, that same "social justice" which turned Cuba into an island prison – and an abyss of abortion, hunger, political imprisonment, torture, executions and human trafficking. Meanwhile, Cardinal Jaime Ortega has embarked on a brazen socialist propaganda scheme through the Archdiocese of Havana.

So join the bishops, move those hips and keep doing the flash mob Samba! The more you swing your hips and clap your hands in Church, the more you'll be conditioned to accept this socialist pan-religion, which has nothing to do with authentic Roman Catholicism.

Lavezzi I: the new soccer "papacy"

But... too bad, just when Catholics were learning to do the Samba and frolicking in Copacabana Beach while praying with "Pope" Francis, another "conclave" has been held – and a new "Pope" has been elected. His name is Pocho Lavezzi, now known as Lavezzi I.

Yes, the soccer ball has been passed from one "Pope" to another. No smoke and mirrors this time. 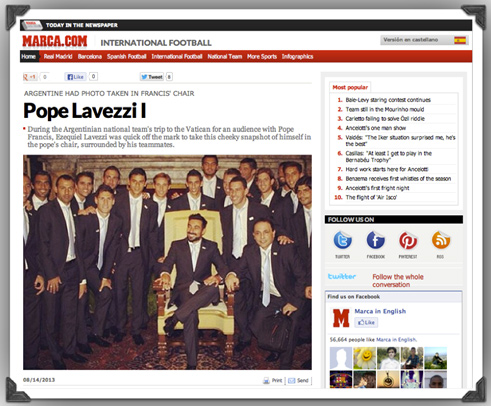 As the photo shows, the new "Pope" has already received permission to sit in the papal chair – and he has sent out an official Tweet to prove it.

Lavezzi I is perfect for the job of a modernist "Pope" – and has undergone proper training. He can run around for hours not accomplishing anything, surrounded by screaming fans.

And don't say you were not forewarned.

Three days after Francis was elected I published an article titled FRANCIS "The Bishop of Rome" – and the erosion of solemnity. Socialism disguised as "social justice." 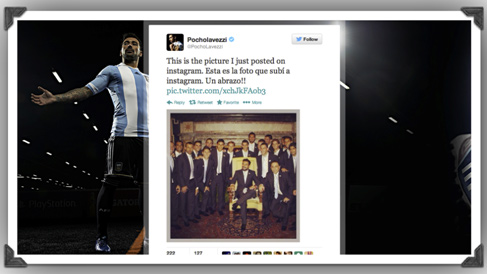 This change should not surprise the reader. Francis doesn't want to be called "Pope." He appears to prefer the title of "Bishop of Rome." But perhaps Romans no longer even want Francis as their "Bishop of Rome." They may feel that Francis cannot be trusted, since behind closed doors he probably does prefer the team from his native Argentina – something which even some of your most pious Romans will not tolerate.

But modernists like to humor us – and Francis may also have had a change of heart after his visit to Brazil – and prefers to relax in Copacabana Beach. This may have prompted his decision to follow in the footsteps of Benedict XVI. It is expected that Francis will soon head for retirement, in Rio de Janeiro – where his friend, socialist Cardinal Cláudio Hummes, waits for "social justice" to be served to the"periphery" – and if Francis has it his way, a more simple Catholicism will be served as well, if you will, perfectly fit for the poor.

As if the poor cannot handle the beauty, greatness and reverence of traditional Roman Catholicism, magnificently represented in the Latin Mass.

So keep clapping and dancing – and don't forget that donation basket. Catholics may be facing decades of financial support for retired modernist "Popes" and prelates – and plenty of pederasty lawsuits.

We wish you well, Francis! It was a short papacy... but it was fun. 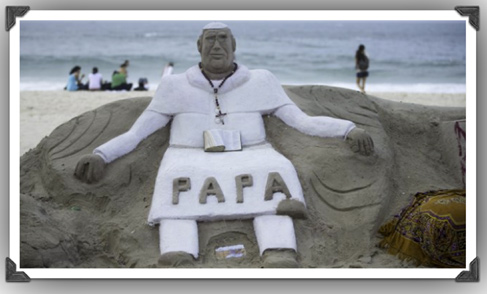 Here is the Samba do Avião (The Airplane Samba) – which describes the anticipation and excitement of landing in Rio de Janeiro:

LEARN HOW TO "FLIP THE TORTILLA"

Still confused about "Pope" Francis? Don't be. Click on THIS LINK and dive in.