VIVE LE ROI! Saint Louis, King of France, pray for us and protect Holy Mother Church. Help restore reverence and order. Bring the poor and all the faithful to the Latin Mass, the only true Mass, for the glory of the Kingdom of Christ on earth. 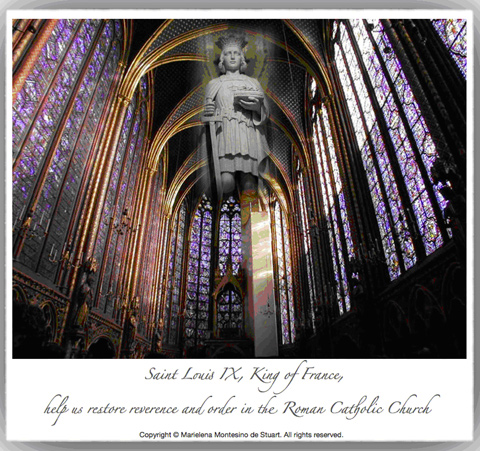 The attacks against traditional Roman Catholicism have reached such an offensive and alarming level, that even those outside the Church are taking notice.

Francis' arrival in the Vatican, his modernist masses and dislike of tradition, are serving as renewed inspiration for poorly formed Catholic bloggers, ignorant journalists and self-declared "Catholic experts," to spill their animosity towards traditional Catholicism – in particular the Latin Mass.

Traditional Catholics are being falsely painted as people who are so involved with the preservation of rituals and reverence, that they are incapable of reaching out to the poor. It is the duty of every faithful traditional Roman Catholic to publicly denounce this falsehood and to educate poorly formed Catholics, who are victims of socialist modernism, on the history of traditional Roman Catholicism – and how the restoration of tradition and order in the Catholic Church is the only way in which the poor can be authentically helped, without the infiltration of the secular environment (socialist modernism).

Saint Louis (Louis IX) King of France, serves as one of the greatest examples of how a devout traditional Roman Catholic helped the poor. Today is his feast day. Pray to Saint Louis that he may help us expel the impostors that have entered the hierarchy of the Roman Catholic Church, along with the pederasts, liars, cowards and thieves, complicit in misleading and hurting so many unsuspecting trusting Catholics, who have become victims of the current chaos and total disintegration of the Roman Catholic institution.


"The King was so liberal an almsgiver, that wherever he went throughout his kingdom, he made gifts to poor churches, to lazar-houses, to alms-houses, to asylums, and to poor gentlemen an gentlewomen.   From his childhood up, he was compassionate towards the poor and the suffering ; and it was the custom that, wherever he went, six score poor should always be replenished in his house with bread and wine, and meat or fish every day. In Lent and Advent, the number was increased, and many a time the King would wait on them, and place their meat before them, and would carve their meat before them, and with his own hand would give them money when they went away.  Likewise on the high vigils of solemn feasts, he would serve the poor with all these things, before he either ate or drank."

"Besides all this, he had every day old broken-down men to dine and sup with him, and had them served with the same food that he himself was eating. And when they had feasted, they took away with them a certain sum of silver. Over and above all these things, the King used every day to give large and liberal alms to poor men of religion, to poor asylums, to the sick poor, and all sorts of poor colleges, to poor gentlemen and married women and spinsters, to fallen women, to poor widows, and to women in child-bed, and to such poor as by reason of old age or sickness were unable to labour or pursue their trade – in number past all telling."