September 19, 2013
"It is bad feng shui to ignore the truth – by some disorderly arrangement of facts. As such, I am keeping my eyes on China." – From My Eyes are on China. Are Yours? 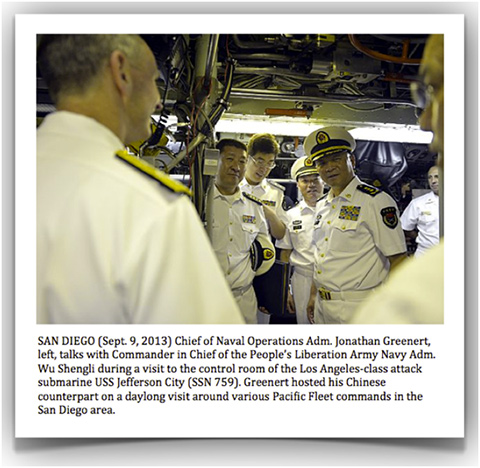 China is our political and economic enemy – so China matters. My experience living under communism taught me never to trust China, nor any socialist government – because socialism is phase one of communism.

Part One of The Beijing Affair details the insidious sharing of military technology with the communists in Beijing. This deceitful and dangerous activity has also been disguised for a long time under programs labeled as "cooperation" and civilian R&D (Research and Development).

Part Three is centered on the bloody persecution of the Underground Catholic Church in China.

To China with Love

ºú½õÌÎ and the United States: The "Rehabilitation" of America.

My Eyes are on China... Are Yours?

Last week, America's sharing of military technology reached one of its worst moments, when the head of China's navy had the red carpet rolled out before him, while he inspected the inside of a United States fast-attack submarine in San Diego Bay. All in the name of "dialogue" – with the enemy, that is.

"China's Adm. Wu Shengli toured the aircraft carrier Carl Vinson and the fast-attack submarine Jefferson City and joined the littoral combat ship Fort Worth at sea. Finishing out a three-day stay, he visited the Marines at Camp Pendleton. "

What a scenario! Vladimir Putin, a former KGB thug, is running our foreign policy in the Middle East – while the communists in Beijing inspect our exclusive naval assets. Socialists everywhere, including Barack Obama, must be celebrating America's participation in this "equitable" distribution of power.

Instead of protecting our military assets, United States military officials appear to be more interested in bending over backwards to assert the "rights" of homosexuals and their sexual partners, so that they are openly welcomed and protected under an eroded military code of conduct – something that even a communist like Vladimir Putin will not tolerate in Russia.