Marielena Montesino de Stuart
Once upon a time, by the Grace of God...
The Grand Duchy of Luxembourg 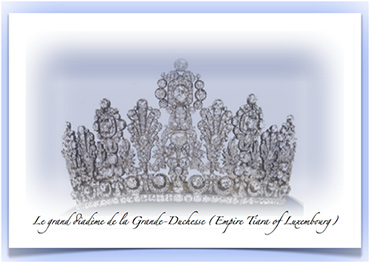 Roman Catholicism is monarchical by nature. Any Catholic who does not understand this or denies this fact, has indeed been deprived of proper formation, under Vatican II's modernist agenda.

We proclaim the "Kingdom" of Christ on earth. We call Our Lord Jesus Christ "King of Kings." We refer to Our Heavenly Mother as "Queen" of the Universe. Masses have been held for the coronation of kings and queens throughout the history of the Church. For centuries, monarchs have received the Church's blessing to rule "by the Grace of God." King Louis IX of France, an extraordinary example of courage and humility, became a saint.

Monarchical rule makes sense only if it is carried out "by the Grace of God" – and according to God's laws; otherwise, it becomes a distortion – and even an abuse of power.

The Grand Duchy of Luxembourg

The tiny, but financially powerful Grand Duchy of Luxembourg, has begun its final descent into the abyss of materialistic atheism.

Grand Duke Henri was Europe's last glimmer of hope, when he took over the reins of the Grand Duchy of Luxembourg. Some believed that as a Roman Catholic monarch he would inspire and protect his people, by following Christian moral principles and by respecting man's rights under the natural laws of God.

Luxembourg's social chaos had already reared its ugly head in the 1970's. Henri's father, Grand Duke Jean, had signed abortion into law in 1978, with certain restrictions – even though he appeared to be a devout Roman Catholic.

In December 2008 the recently deposed Primer Minister of Luxembourg, Jean-Claude Juncker, began a move to strip Grand Duke Henri of his legislative powers, after the Catholic monarch opposed a euthanasia bill which had been approved by the parliament. Through a constitutional amendment, Juncker effectively neutralized the Grand Duke's power, turning him into a rubber-stamping monarch without any right to oppose laws. The constitutional amendment became effective in March 2009. The moral deterioration of Luxembourg's Parliament was again manifested in 2012, when restrictions on abortion were lifted.

The future of the Grand Duchy, the only one left in Europe, surely hung on the balance – as the materialistic forces of death advanced their agenda in the parliament. The thought of escalating his opposition to the euthanasia bill must have brought images of living in exile – an option which would be unpalatable for the Grand Duke. Indeed, there are plenty of royals in Europe who have been removed from their thrones – as in the examples of France, Italy and Greece.

So the Grand Duke has chosen to remain a symbolic ruler, instead of ruling "by the Grace of God." His presence and strength mostly lies in expanding Luxembourg's financial power – and in promoting environmental stewardship.

Grand Duke Henri's financial and diplomatic activities recently took him and his Cuban-born wife, the Grand Duchess Maria Teresa, to Turkey – in order to establish better diplomatic and financial ties with the increasingly radical Muslim nation. Turkey is considered economically as one of the "fragile fives" – a term coined by Morgan Stanley, for the troubled emerging market currencies of Brazil, Indonesia, South Africa, Turkey and India, under most pressure vis-à-vis the U.S. dollar.

Luxembourg's financial experts know how to play their cards – and have business representatives and commissions around the world, ready to jump into lucrative opportunities.

Sustainable Development (Agenda 21) is the United Nations socialist initiative for global governance – which aims to dictate every aspect of our lives, with depopulation as its starting point – followed by restrictions on what foods can be consumed and infringement of private property rights. All in the name of environmental stewardship. Education, such as Common Core, is part of this agenda – and serves to indoctrinate the masses through socialist teachings disguised as "social justice" and "equality."

Many of us who suffered under Castro's brutal Communist regime, live scattered throughout the world as political exiles. We have made the painful choice of never returning to see family members – so as not to give Castro's regime a single dime.

Because every penny that Castro receives through tourism and visitors provides his criminal Communist dictatorship the ability to stay in power and further oppress, enslave and torture the people of Cuba.

Did the Grand Duke and Grand Duchess of Luxembourg give any consideration to such an altruistic moral choice – as an example to their children, heirs – as well as to the international community?

On Friday November 29, the new cabinet will be formally presented in Luxembourg, including Luxembourg's first openly homosexual Prime Minister-designate, Xavier Bettel. Bettel was designated by Grand Duke Henri as the formateur, the one who could put together a coalition government pursuant to parliamentary procedures – following a spy scandal à la NSA, which brought down Prime Minister, Jean-Claude Juncker and his coalition government.

Grand Duke Henri's choice of an openly homosexual Prime Minister-designate obviously did not involve "the Grace of God" – and is another manifestation of how far many Catholics have strayed, including some who have inherited the benefits and splendid privileges as holders of monarchical titles.

Bettel has already announced that making homosexual "marriage" legal will be one of his first acts as Prime Minister. Luxembourg has already legalized homosexual civil unions. This environment could eventually bring an end to the Grand Duchy – since materialistic atheists are known for ridding themselves of those who are no longer of any use.

Which brings to mind some excerpts from Pope Leo XIII's Sapientiae Christianae – his encyclical on Christians as citizens, which I hope that the Grand Duke and Grand Duchess will read:


"It is a high crime indeed to withdraw allegiance from God in order to please men, an act of consummate wickedness to break the laws of Jesus Christ, in order to yield obedience to earthly rulers, or, under pretext of keeping the civil law, to ignore the rights of the Church; "we ought to obey God rather than men."(4) This answer, which of old Peter and the other Apostles were used to give the civil authorities who enjoined unrighteous things, we must, in like circumstances, give always and without hesitation. No better citizen is there, whether in time of peace or war, than the Christian who is mindful of his duty; but such a one should be ready to suffer all things, even death itself, rather than abandon the cause of God or of the Church."

" But, if the laws of the State are manifestly at variance with the divine law, containing enactments hurtful to the Church, or conveying injunctions adverse to the duties imposed by religion, or if they violate in the person of the supreme Pontiff the authority of Jesus Christ, then, truly, to resist becomes a positive duty, to obey, a crime; a crime, moreover, combined with misdemeanor against the State itself, inasmuch as every offense leveled against religion is also a sin against the State."

Humanity is living through a tempest which intensifies each day. As we look into the eyes of history we find more and more that those entrusted with the future of nations, have abandoned their citizens in the darkest hours. We have become pawns in a game board of power and control, where those who govern often do so to fulfill their sociopolitical fantasies, disregarding the Commandments of God and His natural law, which binds all men, for all time and in all circumstances.

Once upon a time, there were rulers like Saint Louis (Louis IX) who ruled by the Grace of God. Those days are over.

The glow of earthly crowns is wearing out. All material intentions have been tested. Grand and extravagant governing plans have failed. Which leaves us with the sense of overwhelming relief that the only true King, Our Lord Jesus Christ, is coming soon.

We must proclaim His Kingdom on earth. It is the only hope for humanity.