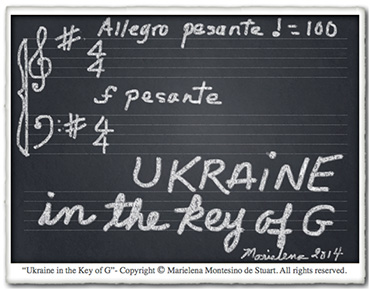 The choices that Ukraine faces are representative of the times:


vs.
Domination by a former Soviet KGB agent


Ukraine, a country which is politically, culturally and ethnically divided, comes out losing once again – no matter which way she turns.

Ukraine is being torn between two powers fighting for control of the same objective:

This is particularly distressing, when we consider Ukraine's past and the massive Holomodor (extermination by starvation) that Ukrainians suffered under Stalin, during the Soviet period.

Now consider the economic and moral impoverishment that the Ukrainians will face under the socialist public policies of the European Union (ask the Greeks and the Spaniards).

And if you still have any doubts about the socialist intentions of both Vladimir Putin in Russia and the European Union, notice the company they both keep.

This past week Putin docked his spy ship in Fidel Castro's Havana Harbor.

Ah, but you say... surely the Russians are just picking up some rum.

Actually, no. Russia has a strong diplomatic, economic and strategic relationship with Cuba's Communist government. Russia is one of Castro's strongest advocates against the symbolic U.S. embargo. In fact, Russia considers Cuba such an important geopolitical partner that it forgave Cuba's $29 billion debt in December 2013.

Oh, Marielena, Marielena – how can you say this, when Vladimir Putin and the Russian Orthodox Church are promoting faith and morality?


Ah, yes, the Russian Orthodox Church was also promoting faith and morality – while it acted as the biggest arm of the KGB during the Soviet period – helping send untold thousands to their deaths and to the Gulags. Meanwhile, Vladimir Putin was also standing by as a loyal KGB agent.

Anyone who has entered through the door of Good and Evil at St. Peter's Basilica in Rome, would have seen the relief on the door, honoring a Russian Orthodox "observer," seated between John XXIII and Paul VI.

Communist tendencies in the Russian Orthodox hierarchy have persisted to this day, as we witnessed during Patriarch Kirill's visit to Beijing, where he met with China's President, Xi Jinping, on May 10, 2013 – in order to get Beijing's blessing for the Russian Orthodox Church in China. This is another example of the great deceit called the "Sino-Soviet divide."

The modern history of the Russian Orthodox Church is one of shameless duplicity, while preaching faith and morality.

My dear reader, don't be pulled into the river of emotions. This is how many faithful Christians are led to believe in farcical victories by impostors dressed as modern crusaders, who are socialists to the core. This is precisely how the Roman Catholic Church has been destroyed from within, for more than fifty years.

I also do not see Francis at the Vatican acting in a manner that would ensure an authentic consecration of Russia, as requested by Our Heavenly Mother in Fatima. As Catholics, it is our profound belief that this is the only hope for Russia.

I do not believe that Vladimir Putin and the Russian Orthodox Church can be trusted, based on their duplicitous actions outlined above, which continue as I write these words.


Meanwhile, European Union officials are reinvigorating their love affair with Cuba's murderous Marxist government, by sending their educational and cultural emissaries to the Communist island prison.

Ah, but you say... surely this cultural and educational interest in Cuba, on the part of EU officials, is simply so that they can "dialogue" and learn how to do the mambo.

Well, you are partly right.

The Castro government hides the horrendous crimes committed against the Cuban people, behind the aggressive promotion of the voluptuous natural beauty of the island, the effervescent character of its people and Cuban music. That irresistible Cuban beat always does it.

But Cuba means more than mambo to the EU.

Cuba is the European Union's strongest geopolitical ally in the Western Hemisphere, for the advancement of Sustainable Development, which is the massive international socialist United Nations initiative aimed at controlling population growth, food production and consumption, private property, the sovereignty of nations, education, culture – and every aspect of human life on the planet – all in the name of "sustainable" environmental stewardship.

After all, how else are globalists going to control entire regions?

The socialists have even written the music to go along with their plans.

Life is not just a war of words, is it?

And the socialists know it.

They know that appealing to your emotions is a key factor – because if they allow you to analyze carefully the words they use ("sustainable," "equal," "social justice," "gender equality") you would be running, desperately, in the opposite direction. These words amount to nothing but complete subservience to the pecuniary and moral plans of the state.

So, as we ponder the choices that the long-suffering people of Ukraine face, we shall do it not just with words – but with music, because socialism is all about smoke, mirrors and emotions.

Let us listen to the Dance of the Knights, part of the Romeo and Juliet ballet suites by Sergei Prokofiev, a famous 20th Century Ukrainian-born composer, who chose to live under Soviet domination – after having been given the opportunity to live in the United States, Germany and France. Upon his return to the Soviet Union, Prokofiev subjected his musical works to the guidelines of "socialist realism."

But Marielena, where are you taking me?

You see, this "socialist realism" – when applied to music – is a political extension of the doctrine of the affections, a theory of musical aesthetics promoted by late Baroque theorists and composers, which argues that music is capable of arousing a variety of specific emotions within the listener. The central point of this doctrine is the notion that the composer is capable of manipulating a piece of music, in order to bring about a specific involuntary emotional response in the listener.

And socialist realism is the key to the domination of Ukraine – as well as the rest of the world, with such involuntary emotional responses as you have seen in the streets of Kiev. Involuntary. Yes. Because the Ukrainian people have been emotionally conditioned to react and follow powers that can bail them out.


This is what happens when several generations are born under Communist domination. They learn to "choose" – but they lose the will to fight for REAL sovereignty and freedom.

It's what Fidel Castro calls the "new man." The new man who only knows how to choose between socialism... and socialism.


I speak from experience, having lived under Fidel Castro's bloody Communist regime.

The truth is that the Ukrainian people are staring into an abyss – because when it comes to Russia and the European Union, neither one can be trusted.

An ominous musical score has already been written for the Ukrainians – and for you.

Can you hear the sound of your beating heart, and theirs, marching in unison for the socialist motherland?

DANCE OF THE KNIGHTS: