May 16, 2013
Hollywood films eject a powerful impact that influences the world. As incredible as it may seem, sometimes that influence is for the good.

To prove that point, the Academy Award winning film, Lincoln, prompted interest in American History which in turn provided a boom for book sellers The movie, a box office smash, created an intense desire within theater patrons to learn everything possible about the early president by devouring books with "Lincoln" in the title. 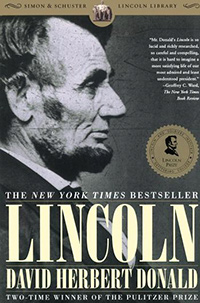 The most thorough insight of the 16th president graces the pages of "Lincoln" by David Herbert Donald (Touchstone Books-Simon & Shuster1995), and now newly re-discovered.

This is THE definitive book of Abraham Lincoln and the most thorough examination of the man behind the presidency who so shaped the United States ever to be published. .

Author David Herbert Donald stated in his forward that he wanted a more "grainy" biography of Mr. Lincoln than had been published in the past. In this, he succeeded admirably.

Eschewing the obligatory gloss and romanticism found in most books written about him, we see at last, the honest, human side of Mr. Lincoln, warts and all, that not only gives us a better understanding of one of the most important men in American history, but challenges us all to let nothing hold us back from following the paths of our own hearts.

Mr. Donald's book is rich with little known information about Abraham Lincoln's childhood, his dysfunctional family, his surprising sense of humor, pranks, and his regular bouts with melancholy and depression so severe that, "he took to his bed for over a week."

Donald's book gives attention to Lincoln's unquenchable ambition, to his brain-numbing labor in his law practice, to his tempestuous married life, and his repeated defeats. And herein lies the success of this book; its honesty in portraying Lincoln as a human being with whom we can all identify.

There are many poignant scenes that come vividly alive in these pages, some so personal that a times the reader may feel he is intruding. One such scene shows Mr. Lincoln alone, and lonely in the Soldiers' Home 3 miles from the capitol. His wife Mary was recovering from a carriage accident which resulted in a head injury. Lincoln could not spend much time at her beside because of the draft riots in New York. Union troops had to be called to New York to try and restore order.

During this period, Lincoln reflected on his administration, his challenges and accomplishments. His problems were many including the still unsolved slavery issue. He was stubborn to the point of believing that only he could solve the problems at hand, which made him seem abrupt, even rude by some. Others accused him of being a dictator.

It became a private time of introspection and mental justification of many of his misunderstood actions. As he stares into space we want to slip quietly away, without disturbing him, closing the door gently behind us.

The myths are dispelled. He did not scribble the Gettysburg Address on the back of an envelope on the train taking him to the site. Lincoln worked many hours to craft that speech, re-writing it 50 times, checking every dot and comma.

He had more than his share of detractors. He was not unanimously loved as we might believe. His own General George B McClellen, not only disrespected Lincoln but made no pretense otherwise. The feelings were mutual with Mr. Lincoln saying of McClellen, "He has the slows."

Lincoln's ever working mind kept him so preoccupied that once his son fell out of the carriage and he didn't even notice. This kind of thing is what makes this easy read so charming.

We live with him through his doubts and disillusionment, particularly with the Supreme Court following the Dred Scott case.

We find ourselves blushing with him in his conversation with male friends as they, in their unsophistication, acknowledge their ignorance of sex, his awkward meeting of Mary Todd (he once let it be known that he liked plump women), his nervous breakdown and suicidal thoughts when he broke off with her and his showing up to fight a duel that almost was. We can wonder how the marriage of Mr. Lincoln and Mary survived at all. Once she struck him on the nose with a piece of firewood. He found solace during his lengthy absences as a circuit riding lawyer.

Donald's book is written in such a compelling manner that we find ourselves standing taller at each victory. We agonize with Lincoln during the push for the Kansas-Nebraska Bill and even get a few butterflies before the important debates on the issue with Douglas. We even share and feel his exhaustion and burden of an immense responsibility. This book fills in all the blanks.

Nearing the end of the book, we find ourselves slowing down as if to delay what we know is coming. Maybe, by not rushing forward, we can maybe, stop that shot from being fired. We do not want it to happen. We know the man now and care about him. We know his feelings.

This is unquestionably the best book on Lincoln ever published. The author spend ten years preparing it. He was obsessed with Lincoln. Indeed, if you look closely, you will see that Mr. Donald has chosen to make his home in...Lincoln, Massachusetts. Now that is devotion

Hollywood should take notice of how an extremely well made film with values can influence people for the good while enjoying over the top box office success. Choice of actors is pertinent. Daniel Day Lewis, who remarkably played Abraham Lincoln, is the consummate performer who has raised acting skills to a high art form bringing dignity to the profession. Mr. Lewis is a class act who always presents himself well and displays a refreshing humility when appearing on interview programs. He is a true movie star.

More productions like this can bring a genuine greatness to Hollywood that is more than capable of producing films that can affect the world in a positive manner and make solid money doing it. This movie even stimulated people to read books to learn more of the subject matter of the film.The public has spoken. Is Hollywood listening?