December 28, 2013
"No one could buy or sell unless he had the mark, which is the name of the beast or the number of his name. Here is wisdom. Let him who has understanding calculate the number of the beast, for it is the number of a man: His number is 666." Revelation 13:17-18 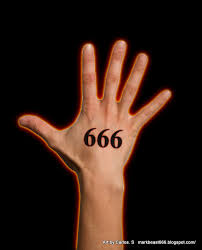 This prophecy was made before anyone had any idea of what electronic technology would be able to do in the future. Which makes this breaking story downright eerie.

SILICONE VALLEY, Ca. The headline story received little attention even though the contents are explosive. Like everything else, people are sleeping through it.

The East County Times (Contra Costa Times) front page story, Saturday December 21, 2013, was deceptively headlined, "Human 2.0." There is a brief mention of a "chip implanted in the hand," under a skeletal image of a hand along with another throw-away sentence, about 'taking us to a new threshold.". But the headline hid the true meaning of the contents.

The story by Steve Johnson (sjohnson@mercurynews.com) tells of a computerized person named Amal Graafstra. He doesn't need a key or password to get into his car, home or computer. He is programmed to unlock them all at the mere wave of his hands which are implanted with radio frequency identification tags.

This implemented technology which has already been fitted to 500 people is engineered by a company called Dangerous Things.

The idea behind this Bay Area company is to outfit people with electronic devices that can be swallowed, implanted in their bodies or attached to their skin via "smart tattoos." This technical advance, the story details, "could revolutionize health care and change the way people interact with devices and one another."

The brains of this company echo what has been proclaimed through the halls of the White House (regarding sharing the wealth and nationalized health care) which, they say, regarding the implants, "Will make life better for everybody."

According to the story, these 'chips' will "be for the throat – with a built-in microphone, battery and wireless transceiver – that would let someone operate other devices via voice commands."

Google CEO, Larry Page (of Mountain View, California) said; "Eventually you'll have an implant where if you THINK about a fact, it will just tell you the answer," like a Google Search engine. (emphasis mine)

Another feature (of what will become human robots) is implanting people's brains with thousands of tiny sensors they call, 'neural dust' "

Many rightly fear that the implants might become mandatory for health insurance or jobs since all health and work information is stored in the chip. Next, re-read the prophecy above. Buying and selling by this required Mark of the Beast will naturally be next.

Here is how Revelation 13: 16-17 describes that Mark:"And he causeth all, both small and great, rich and poor, free and bond, to receive a mark in their right hand, or in their foreheads. And that no man might buy or sell, save he that had the mark, or the name of the beast, or the number of his name."

This will replace all credit cards. Bank accounts will be no more. Every transaction will take place via the chip. Without it, one can do nothing or even function. One could no longer worship God and function in life. Instead we will be required by law to worship the beast, which is Satan, which is done by receiving the chip.

And if one refuses that mark? Verse 15 makes it clear: "As many as would NOT worship the image of the beast should be killed." (emphasis mine)

The end time is here. Exactly as predicted in The Bible. When that time culminates, no philosophy, life style, political party or sexual preference will save you.

Instead of worrying about what the Duck Dynasty is doing, the Gays should start worrying about their personal relationship with God. That will be the only thing that counts when the world, as we know it, ends.

This same suggestion is respectfully passed along to Mr. Obama. The greatest socialist and communist leaders will not be able to pull you out to safety once this is concluded. Only a right relationship to God can do that. There is still time for you to be remembered as a great man. Don't blow it. Do what is really the right thing to truly benefit America. We frankly prefer that you go out as the great man you are capable of being.

Photo Caption: The Mark of The Beast