August 22, 2014
FERGUSON,MO (8/21/14) – The real crime committed in Ferguson, Missouri was the Communist instigation and orchestration of the riots to make this a racist issue, i.e. the 'hatred' of blacks by whites. Their socialist run newspapers continually hammered that this was a case of, "An UNARMED BLACK 18 year old (who) was fatally shot by a WHITE police officer." Readers, check the back stories and see the number of times this phrase was used in order to incite passions. This racial reference is never seen when a black kills a white. 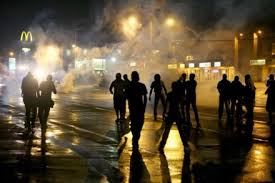 The efforts rewarded the Communists with racial riots all over the country, which was to divide citizens thereby weakening America. When the missiles buzz overhead, you will get this. By then it will be too late.

It is tragic when any young person is killed. Michael Brown was somebody's son. His mother, Lesley McSpadden said, "Yea, he wore his pants low and he had tattoos, but he was my son."

The Brown family's attorney, Anthony Gray stated, "Let me be real clear to everyone here. This family has never said that Michael Brown was perfect."

Moments before the confrontation with Police Officer Darren Wilson, a video surfaced showing Brown committing a strong-arm robbery in a convenience store where it shows Brown violently shoving a small clerk who appears to be a woman. His heist? Forty two dollars worth of cigars, some of which were seen tucked in his waist when he encountered Officer Wilson.

And the videos and eye-witness reports show that Officer Williams did not simply stop Brown and a friend to question them for being "in the middle of the roadway," then shot him dead as he put up his hand in surrender mode. This is the propaganda version.

The account given was that Officer Wilson attempted to get out of his squad car to talk to Brown, who pushed him back into the car, THEN ENTERED IT, and began fighting for the officer's gun. A shot was fired in that car. Wilson and Brown got out of the car and the fatal shooting occurred. During that encounter, Wilson was punched in the face by Brown, with such force that medical attention was required.

A much different account than that given by the provocateurs who intentionally stirred the situation into riots, dividing blacks and whites. And it is interesting to note that simultaneously, the exact same kind of riots, with the exact same printed signs, with the exact same slogan, with demonstrators walking with their hands up saying, "Don't shoot...I surrender," immediately broke out in St. Louis, New York, Oakland, San Francisco along with other key spots with The Black Panthers playing a significant role. It was all orchestrated.

This whole plot, and others like it are designed to destabilize a country for the precise purpose of causing unrest. The Communists are geniuses in creating such problems within countries with the goal to divide and weaken them.

This was a carefully prepared collaboration, called a 'coincidence,' the same kind of 'coincidence' that brought about the Benghazi riot and the killing of (our) Ambassador J. Christopher Stevens, with the claim that this was a spontaneous outrage over a film putting Muslims in a bad light. Sure.

It is against the law to yell "FIRE" in a crowded theater when there is no fire, since people could be hurt in the ensuing panic. These instigated race riots in Ferguson, Missouri suggests lawsuits could and should be properly filed against those newspapers and "journalists" who have exploited a regional crime scene into an international hot bed of destruction which has caused serious injuries and destruction of property, based upon deliberate misinformation. This has the same effect of falsely yelling "FIRE" in a crowded theater.

When that video of the convenience store robbery by Brown was released, the rioters, along with Al Sharpton, who can always be counted on to fan the flames of any kind of discord, and having lied about a racial incident that never happened involving one Tawana Brawley, yelled and screamed that the video was a desperate attempt to "assassinate the character of Michael Brown."

Not helping their cause, the black rioters looted stores, destroyed property and threw bottles and Molotov cocktails at the officers who had also come under heavy gunfire by them.

A huge public funeral for Brown is planned for next Monday. Attorney Anthony Gray stated, "It's going to be a funeral and "public memorial" (of honor). Watch how this funeral is promoted.

Lawsuits should be filed for damages against the journalists and their newspapers who stirred up this event into a destructive war against the community, the nation, and blacks against whites.

Attention Legal Minds: It is way past time to resurrect the "FIRE" in a theater law, which is still in existence, and apply it to those who instigate riots and file cases against the journalists (writers) of this false information and those newspapers that publish it. Pull up your briefs and put a stop to this insanity. It can be done.

Closing Note: Not any one person can be blamed for this death. Please consider this: Blacks and whites CAN get along, work together and be neighbors. The entire Ferguson mess along with similar ones throughout the country would never have happened had it not been for the deliberate agitation caused by those who want to destroy America. Perhaps Michael Brown's life would have played out as it was intended, had it not been for that agitation that had been present throughout his short life. His death was tragic. Even more so since it could have been prevented.