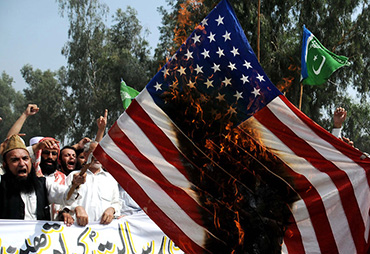 Frequent contributor, Rev.Ed Berkey (Retired) sent us a wonderfully written public letter from an American Airlines pilot. The only part I would disagree with is that the Koran shows ANY verses of peace or love. On the contrary it tells Muslims specifically to rob, lie and kill.

As we approach the anniversary of the horrific cowardly and unexpected 9/11 attacks on America by Muslims, this forwarded letter is especially important, as no doubt, they have planned an attack on America this Thursday to commemorate the day when Islam was defined.

And who can forget the video of Muslim women dancing in the streets after the attack, Muslims in New Jersey on a roof top cheering and applauding as the Twin Towers fell, and the Islamic leader proclaiming on TV: "This just proves that OUR god is more powerful than YOUR God." What it DOES prove, by the Islamist's own statement, is that we do NOT worship the same God as they try to deceive us into believing.

No name calling, no hatred, no political agenda.

CANADIAN COMMENT APPEARS AT THE END OF THE ARTICLE AND IS MEANINGFUL.THERE IS ALSO SOME RECENTLY ADDED BRITISH COMMENT.

This pilot hit the nail right on the head in his open letter.

A newspaper stated that some Muslim doctor is saying we are profiling him because he has been checked three times while getting on an airplane. The following is a letter from a pilot. This well-spoken man, who is a pilot with American Airlines, says what is in his heart, beautifully.

I've been trying to say this since 911, but you worry me. I wish you didn't. I wish when I walked down the streets of this country that I love, that your color and culture still blended with the beautiful human landscape we enjoy in this country. But you don't blend in anymore. I notice you, and it worries me.

I notice you because I can't help it anymore. People from your homelands, professing to be Muslims, have been attacking and killing my fellow citizens and our friends for more than 20 years now. I don't fully understand their grievances and hate, but I know that nothing can justify the inhumanity of their attacks.

On September 11, ARAB-MUSLIMS hijacked four jetliners in my country. They cut the throats of women in front of children and brutally stabbed to death others. They took control of those planes and crashed them into buildings, killing thousands of proud fathers, loving sons, wise grandparents, elegant daughters, best friends, favorite coaches, fearless public servants, and children's mothers.

The Palestinians celebrated, the Iraqis were overjoyed as was most of the Arab world. So, I notice you now. I don't want to be worried. I don't want to be consumed by the same rage, hate and prejudice that has destroyed the soul of these terrorists. But I need your help. As a rational American, trying to protect my country and family in an irrational and unsafe world, I must know how to tell the difference between you, and the Arab/Muslim terrorist.

How do I differentiate between the true Arab/Muslim Americans and the Arab/Muslim terrorists in our communities who are attending our schools, enjoying our parks, and living in OUR communities under the protection of OUR constitution, while they plot the next attack that will slaughter MORE of the same good neighbors and children?

I want to know, I DEMAND to know and I have a right to know, whether or not you love America ..... Do you pledge allegiance to its flag? Do you proudly display it in front of your house, or on your car? Do you pray in your many daily prayers that Allah will bless this nation; that He will protect it and let it prosper? Or do you pray that Allah will destroy it in one of your Jihads? Are you thankful for the freedom that this nation affords? A freedom that was paid for by the blood of hundreds of thousands of patriots who gave their lives for this country? Are you willing to preserve this freedom by also paying the ultimate sacrifice? Do you love America?? If this is your commitment, then I need YOU to start letting ME know about it

Your Muslim leaders in this nation should be flooding the media at this time with hard facts on your faith, and what hard actions YOU are taking as a community and as a religion to protect the United States of America. Please, no more benign overtures of regret for the death of the innocent, because I worry about who you regard as innocent.... No more benign overtures of condemnation for the unprovoked attacks, because I worry about what is unprovoked to you. I am not interested in any more sympathy; I am interested only in action. What will you do for America – our great country – at this time of crisis, at this time of war?

I want to see Arab-Muslims waving the AMERICAN flag in the streets. I want to hear you chanting 'Allah Bless America.' I want to see young Arab/Muslim men enlisting in the military. I want to see a commitment of money, time and emotion to the victims of this butchering and to this nation as a whole.

The FBI has a list of over 400 people they want to talk to regarding the WTC attack. Many of these people live and socialize right now in Muslim communities. You know them. You know where they are. Hand them over to us, NOW! But I have seen little even approaching this sort of action. Instead I have seen an already closed and secretive community close even tighter. You have disappeared from the streets. You have posted armed security guards at your facilities. You have threatened lawsuits. You have screamed for protection from reprisals.

The very few Arab/Muslim representatives that HAVE appeared in the media were defensive and equivocating. They seemed more concerned with making sure that the United States proves who was responsible before taking action. They seemed more concerned with protecting their fellow Muslims from violence directed towards them in the United States and abroad than they did with supporting our country and denouncing 'leaders' like Khadafi, Hussein, Farrakhan, and Arafat.

IF the true teachings of Islam proclaim tolerance and peace and love for all people, then I want chapter and verse from the Koran and statements from popular Muslim leaders to back it up. What good is it if the teachings in the Koran are good, pure, and true, when your 'leaders' ARE teaching fanatical interpretations, terrorism, and intolerance?

It matters little how good Islam SHOULD BE if huge numbers of the world's Muslims interpret the teachings of Mohammed incorrectly and adhere to a degenerative form of the religion. A form that has been demonstrated to us over and over again. A form whose structure is built upon a foundation of violence, death, and suicide. A form whose members are recruited from the prisons around the world. A form whose members (some as young as five years old) are seen day after day, week in and week out, year after year, marching in the streets around the world, burning effigies of our presidents, burning the American flag, shooting weapons into the air. A form whose members convert from a peaceful religion, only to take up arms against the great United States of America, the country of their birth. A form whose rules are so twisted, that their traveling members refuse to show their faces at airport security checkpoints, in the name of Islam.

We will NEVER allow the attacks of September 11, or any others for that matter, to take away that which is so precious to us – our rights under the greatest constitution in the world. I want to know where every Arab Muslim in this country stands and I think it is my right and the right of every true citizen of this country to DEMAND it. A right paid for by the blood of thousands of my brothers and sisters who died protecting the very constitution that is protecting you and your family.

I am pleading with you to let me know. I want you here as my brother, my neighbour, my friend, as a fellow American... But there can be no grey areas or ambivalence regarding your allegiance, and it is up to YOU, to show ME, where YOU stand. Until then, "YOU WORRY ME!"

I totally agree with this sentiment. I hope you will forget all about the 'political correctness' mandate we've had rammed down our throats, and see if this doesn't ring true in your heart and mind. For Canada, with all the multiculturalism we've been told is so important... why should we not, as Canadians, expect that the millions of new people immigrating to our country will show their love for our country, their allegiance to our country, their willingness to obey the laws of our country, and acceptance that we are a Christian country? Just because they are able to enjoy exercising their own religion, they should NOT expect us to be ashamed of ours. They knew Canada was a Christian country when they came here. Why are we erasing Christianity because immigrants who are unwilling to adopt our way of life expect us to? There is just too much insanity in the world, and we have to start taking a stand.

I hope you will forward this, so that others will feel they are not alone if they are starting to feel the same.

BRITISH COMMENTS: At last a clear non-racist example of the concerns that the vast majority of our Nations population probably share. The pilot's letter encapsulates all that is fair and just about national pride and protection of one's national culture. I fear it may be too late here in UK, BUT we too want our country back in the form that attracted all these different cultures to come here in the first place!! In all our conversations with a wide range of friends and acquaintances we have not met one that disagrees with our own views. If only we all had the courage of our convictions to pass this on, it is a statement that should be accepted as the heart-felt feelings of someone with honest commendable national pride.

Not all Muslims are terrorists but all terrorists to date have been Muslims. Stand up and be counted!

Australian Comment: Best email I have had in years it needs to be in every paper every day until we get some answers.