October 6, 2014
To KNOW what a religion is about, read their 'sacred' book. If you do not, you can be caught totally unprepared for destructive surprises such as September 11, 2001. One must study and be aware to recognize and stop a possible enemy. 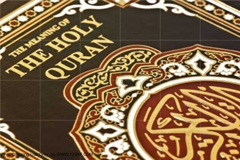 Muslims tell us that Islam is a religion of peace. Those who carelessly accept this premise are swept up into a deception, being convinced that there are 'Moderate Muslims.'

President George W. Bush fell into that trap right after the cowardly sneak attacks on The World Trade Towers in New York City, with a second attack on The Pentagon, and a third plane that was intended to crash into the White House or The Capitol, but that one was stopped by passengers who took over the aircraft and crashed it into a field in Pennsylvania, preventing a major disaster in D.C.

Who can forget that as a shocked America wandered amidst the rubble of destruction and thousands of horrific deaths, Mr. Bush stood before the microphones and said this: "But Islam is a religion of peace." Really? To hear him say that under the circumstances was like being hit with a stun gun. Especially when he said it a second time for emphasis.

Blindly accepting what is said about Islam without examining their "Sacred Book" is at one's own peril. The walking dead have been made to believe that "the majority of Muslims are good people and that there are moderate Muslims." These murderous actions are only committed by a few radicals, they say. However all Muslims are guided by the same book, The Koran, which they all are required to follow.

It is past time to READ this book that instructs everyone who identifies with Islam. Here are some examples from The Koran (Qur'an) that is taught in the mosques and dictates the 'duties' of Muslims. These are only a few of the rules from "The Book of Peace."

"Slay the unbelievers wherever you find them." Qur'an 2:191

"Make war on the infidels living in your neighborhood." Qur'an 9:123

"When opportunity arises, kill the infidels wherever you catch them." Qur'an 9:5

"Any religion other than Islam is not acceptable." Qur'an 3:85

"Maim and crucify the infidels if they criticize Islam" Qur'an 5:33

"The unbelievers are stupid; urge the Muslims to fight them." Qur'an 8:65

"Muslims must not take the infidels as friends." Qur'an 3:28

"Terrorize and behead those who believe in scriptures other than the Qur'an." Qur'an 8:12

"Muslims must muster all weapons to terrorize the infidels." Qur'an 8:60

"I shall cast terror into the hearts of the infidels. Strike off their heads, strike off the very tips of their fingers. Qur'an 8:12,

"Those that deny Our revelations We will burn in fire. No sooner will their skins be consumed than We shall give them other skins, so that they may truly taste the scourge. God is mighty and wise. Qur'an 4:56,

"Men have authority over women because God has made the one superior to the other, and because they spend their wealth to maintain them. Good women are obedient. They guard their unseen parts because God has guarded them. As for those from whom you fear disobedience, admonish them and forsake them in beds apart, and beat them. Qur'an 4:34

Quran (2:244) – "Then fight in the cause of Allah, and know that Allah Heareth and knoweth all things."

- "As to those who reject faith, I will punish them with terrible agony in this world and in the Hereafter, nor will they have anyone to help."Qur'an (3:56)

- "Soon shall We cast terror into the hearts of the Unbelievers, for that they joined companions with Allah, for which He had sent no authority." Qur'an (3:151)

Mohammed promised his followers seven heavens in which: They are to cohabit with demure virgins...as beauteous as corals and rubies...full-breasted maidens for playmates...in the gardens of delight.... They're to lie face to face on jeweled couches, and be serviced by immortal youths...young boys, their personal property, as comely as virgin pearls.... We created the houris [dancing girls] and made them virgins, carnal playmates for those on the right hand.... We are going to wed them to dark-eyed houris. The Qur'an 55:56; 55:58; 78:33; 56:12; 52:16-17, 24; 56:35-38; 52:20]

ISIS is already in America and we have already had a beheading by a Muslim in our own country with many more promised. Obama, who was PLACED in the Oval Office (not voted in) favors Islam above all other faiths. He has opened the borders to allow terrorists to enter America, to set up training camps here, and to build mosques where the Koran is preached, supported by our tax money.

The Koran is written poetically, disguising what it is actually saying. The reading of it is actually hypnotic which explains some of the senseless killings where it seems all human traits have been yanked out of these manipulated (otherwise decent) individuals.

Are there Muslims that can be trusted? Only those who renounce the Koran, and withdraw from the Mosques. Otherwise, even if they identify as "moderate," they are suspect since they all live under the dictates of The Koran and all of these terrorist crimes against humanity are by Muslims who are brainwashed into committing murder in the name of Allah.

This is personally painful since I have never met a Muslim I didn't like. Indeed, I once saved the life of a practicing Muslim in Springfield, Massachusetts. The problem is, that these people who can be so very gracious, helpful and sharing, and have contributed so much to the sciences, philosophy, architecture, art and literature, are being totally deceived into becoming what they are not. That is the real tragedy, since they are all on the road to Hell without knowing it. Hopefully they will come to their senses before it is too late. That is my prayer.