Rev. Austin Miles
Founders: were they or were they NOT??

November 14, 2014
WASHINGTON, D.C.-11/13/14 – In an effort to relegate our history and our Constitution into the PC dust heap, The Founding Fathers are being trashed by Obama's Communist Administration who insist that they were NOT Christians.

Today's papers hammer this home. In a story by Associated Press, "School Calender Ditches Religion," which tells how Maryland will scrub any reference to Christmas from the school calendar, Ben Nuckols, states, "The Constitution bars public schools from using religious holidays as a reason for closing." 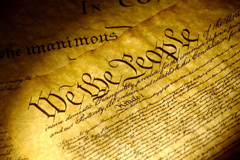 How's that again? Would Mr. Nuckols and the AP please show us exactly where this is stated in the Constitution of the United States, the first nation in history that was founded TOTALLY on the principles of God and The Bible?. COLUMNIST/RADIO HOST JERRY NEWCOMBE sets this history straight and answers the fabricated version. So, were they, or were they NOT? His column is re-published by Mr. Newcombe's permission.

God and the Constitution

Some skeptics today like to argue that the founding fathers purposefully left God out of the Constitution. They say that a "Godless Constitution" was the intended design of the document – and they're wrong.

First of all, the authors of the Constitution not only mention God, they even mention that Jesus is God. They do this in the ratification clause. This was done "in the Year of Our Lord" 1787.

The general response of the skeptic is to dismiss the "Year of Our Lord" as just a custom. Custom, shmustom. The leaders of the French Revolution, who really did espouse a secular Enlightenment philosophy, changed their calendar a couple years after America's Constitution, in order to explicitly repudiate Christianity, so that time would not be measured in "the Year of Our Lord." (About a dozen years later, Napoleon restored the Christian calendar.)

To understand America's founders, we have to realize what Dr. Michael Novak of American Enterprise Institute has said. He observed that thinkers we call men of the "Enlightenment" are really of two sorts. There are those who believed in God and those who didn't.

The French Revolution was history's first secular revolution – and, incidentally, spilled rivers of blood. They chose to follow the unbelieving thinkers of the "Enlightenment" – e.g., Voltaire, Diderot, Rousseau, David Hume. But our founders quoted those men of the "Enlightenment" who believed in the Lord – e.g., Montesquieu, John Locke, Sir William Blackstone.

In his The Spirit of Laws, Baron Montesquieu wrote: "We shall see that we owe to Christianity, in government, a certain political law, and in war a certain law of nations – benefits which human nature can never sufficiently acknowledge."

I used to have a Sunday school teacher who became born again while earning his Ph.D. at Yale. He studied John Locke in depth. Locke not only wrote his Second Treatise of Civil Government, which was influential to our nation's founders; but he also wrote The Reasonableness of Christianity. As my teacher read Locke in his own words, he came to embrace Christ.

Sir William Blackstone, the great British jurist, was important to our founders and is still quoted by the Supreme Court sometimes. Blackstone wrote of "the law of nature and the law of revelation" – like "the laws of Nature and of Nature's God" in our Declaration of Independence.

The two key founding documents in American history are the Declaration of Independence and the Constitution. The first explains why we exist as a nation. Not only does the Declaration mention God four times, most importantly, it says that our rights come from the Creator.

There were 55 men who assembled in what we now call the Constitutional Convention. Research shows that 50 to 52 of those men were members in good standing of Trinitarian churches. Many of them were even presidents and founders of Bible societies.

Certainly, Benjamin Franklin was not a Trinitarian, nor a member of such a church. Yet after weeks of wheel-spinning at the convention, on June 28, 1787, Dr. Franklin delivered a speech, asking them how it is that they had forgotten to seek God's help.

He said, "In the beginning of the contest with Great Britain, when we were sensible of danger, we had daily prayer in this room for divine protection. Our prayers, Sir, were heard, and they were graciously answered. All of us who were engaged in the struggle must have observed frequent instances of a superintending Providence in our favor."

He went on to say, "I have lived, Sir, a long time, and the longer I live, the more convincing proofs I see of this truth – that God governs in the affairs of men. And if a sparrow cannot fall to the ground without His notice, is it probable that an empire can rise without His aid?"

He asked that they pray. A variation of his request for prayer was accepted – so on July 4th, they all attended worship together at a local Christian church and prayed together. After they met, much of the acrimony had died down; and they were able to produce the Constitution. And again, Franklin was one of the least religious/orthodox of our nation's founding fathers.