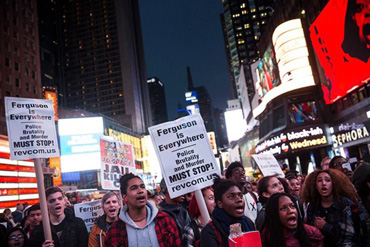 World Communist leaders have taken seriously and manipulated an old saying of absolute truth: "A house divided against itself cannot stand."** In their hands, that saying became, "Divide and Conquer."

That is exactly what we are seeing today in The United States as a fully orchestrated race war has erupted between blacks, who have been brainwashed into believing that they are mistreated in a society of 'white privilege" and are at war with white people who they think stands in their way, which means, all of them.

And what exactly are the blacks getting out of this besides the value of the things they steal from houses and businesses after smashing in windows? One thing is to be able to vent their anger at perceived grievances that The Communist Party has agitated them into believing.

As a result, whites who are not racist are becoming so, along with employing stereotypes of blacks as a result of their disruption of society, vandalism, looting and virtually trashing an area by burning homes and businesses along the way.

With all the confusion, the Communist Party is diligently working in the background as a distracted America weakens.

Can this Communist connection be proved? YES!

First of all, have you noticed how, on the 'spur of the moment' these riots and demonstrations SUDDENLY come together with hundreds of people not only from the area but from other areas of the country, and are all carrying professionally crafted signs with such slogans as "Black Lives Matter" that immediately appeared and put into the hands of the protesters. And those signs cost money to produce. Each protest-riot is carefully planned.

Do you really believe that these things just happen spontaneously? Who is behind it?

If you were watching the news broadcasts about the protests in New York City, you undoubtedly saw many people carrying signs reflecting their beliefs. But wait. The people holding those signs don't look even barely capable of having printed the signs themselves, so you might wonder who the sponsor of the rally could be. Who furnished the signs? Now hold on to your seats:

You will see the sponsors of these protests identified, on the bottom of the signs which is: www.revcom.us, which you can see in the photo of the mobs in this piece.

So, if you're at all curious, just click right here on, www.revcom.us, and see who provided those spiffy signs those misinformed participants are holding up. It'll only take a second. The sponsors are, Revolutionary Communist Party USA.

And remember, Barack Hussein Obama was sponsored and PLACED into the Oval Office by the Communist Party USA (CPUSA). They have become so brazen and comfortable that these days they are not even trying to hide that fact. It is now in the open.

When there is EQUALITY in the U.S., which is supposedly the goal, we will have it as promised. We will all be equal in poverty and under the baton of iron-handed dictators as American becomes a third world country.

BLACKS-WAKE UP!! You are being used to help overthrow America in order to facilitate the Communist take-over. Stalin labeled people who can be manipulated to help their socialist agenda as, "USEFUL IDIOTS." And that is a label blacks have brought upon themselves, plus contributing to their own unflattering stereotypes. You are better than this. I have confidence that you will allow the seed of greatness within you to come forth. Stop allowing yourselves to be used and pushed further away from the future you actually have.

***The saying, comes from The Bible that foretold everything that is going on today. This is found in St. Mark 3:25, and St. Matthew 12:25.. It is also found in St. Luke 11:17 which takes it further by stating, in the direct words of Jesus: "Every KINGDOM divided against itself is brought to desolation."

And THAT is what is being instigated in America today for that very purpose. Revelation 16:19 shows the importance of this tactic as will be seen in the last days: "And that great city was divided into three parts, and the cities of the nations fell..."

NOW THE REAL TRUTH: So who is initially behind this maneuver that was launched from the days of old? Satan, the enemy of all mankind, whose representatives now on earth, are attempting to execute this maneuver to basically take down all of mankind. The Bible is also clear about today, declaring there will be...Spiritual Wickedness in High Places. That is exactly what we are experiencing today, the dark spiritual force behind the evil bubbling up from hell. This is indeed a spiritual battle that can only be won by Christians rededicating themselves to God and centering their lives on the Bible along with the pastors re-dedicating their lives to God and the dedication to carrying out the sacred work entrusted into their hands. THEN God can bless and protect us.

Our thanks to national Radio Host, Bob Boyd, of Issues in Education for alerting us to the website showing the sponsors of the current unrest in America.