May 8, 2015
VATICAN CITY (5/7/15) – Much hope and anticipation arose when Pope Francis was crowned. He exhibited more humility than most any pope in history, immediately eschewing the lavish ornamentation and life style of his office, preferring to stay with other priests of the church rather than reside in the lavish pope quarters furnished by The Vatican. 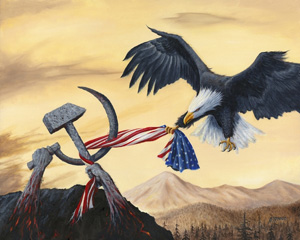 He wanted simpler transportation, and more accessibility to and by the people. Those of other religions showed admiration and quickly referred to him as The People's Pope.

He was the first to take the papal name of Francis since St. Francis was very humble, lived in poverty and loved animals. This particularly hit a positive chord for this writer.

However, that Pope Hope quickly faded. One of the first things he said to the public was that the world needs social equality, social justice and redistribution of the world's wealth. Alarm bells began to chime. Then it got worse – now get this – he implied that it was evil to be wealthy.

A huge reaction followed as people shook their heads in shock, seeing these statements coming straight out of the writings of Karl Marx and repeatedly proclaimed by Barry Soetero (who later took the Muslim name of Barrack Hussein Obama), then was manipulated into the Oval Office by the Communist Party USA (CPUSA) that fully sponsored him.

He was not even born in America, which is essential to run for president, but by corrupting voting machines and falsifying votes, they reached their goal in having a Communist, one of their own, direct and "change America."

Very recently the pope spoke out about "global warming," Obama's favorite 'cause,' which is a hoax to generate a world tax that would make everyone involved (leaders such as Al Gore) unspeakably wealthy. Only the sun affects heat or cooling, not carbon dioxide or anything else from cars and factories. The whole premise is bogus.

Pope Francis and Mr. Obama obviously have been reading from the same book. The odd couple seems to not only share the same ideology but can skillfully speak double-talk.

An example is found in a recent statement to the world that was released by the Associated Press (4/25/15) with headline: Pope Supports equal Pay. In that story the pope lamented that "it is pure scandal that women earn less than men," then pontificating that; "this is a form of machismo that shows how men want to dominate women."

These remarks were given during his past Wednesday's general audience. While he gives stats on this 'scandal,' he states how women have NOT been recognized fully and not given the same opportunities as men and this is wrong. He then said, at this very same conference, that he ruled out having women ordained and heading Vatican congregations. So let women be equal to men in all opportunities by word, but not allowing women to be priests in actuality. How's that again?

Obama's thoughts and those of the pope are the same. Not only does Marxism appear to be the goal of these two world leaders, but Obama constantly gives hints as to where he is taking our country.

Look at this quote that Obama uttered to Democratic donors in New York City: "This is not a project that stops after a certain term in office."

For the first time, he told the truth. His project implemented by CPUSA is that his term in office is not a project that stops after a certain term in office. Indeed it is not to stop at all. The intention and determination of Obama and his Communist handlers is to have him use Executive Orders to declare himself President (dictator) for life in early 2016 during a created national crisis.

That is what is planned and unless our representatives get a backbone, this is what our future will be if this impostor and traitor is not removed from office now. He is more than willing to surrender our flag to the Communists. That has been his goal all along.

Obama has been the most immoral anti-America, anti-God, anti-life, anti-family leader in the history of the United States and the biggest liar of all time.. He is provoking race riots and giving every excuse in the book to justify the black rioters attacking citizens, destroying homes and businesses while looting everything they can grab, which is an essential part of their 'protests.'

Here is what was quoted this past Monday and published by his PR secretaries, the Associated Press, regarding the reason for the Baltimore riots: "President Obama blamed a lack of opportunity in minority communities and harsher treatment of black and Hispanic men by police for fueling a sense of unfairness and powerlessness." He went on to flatulate: "There are consequences to indifference." Right or wrong was never an issue.

So if they do not possess the same things that others have worked to achieve (yes work), then they should be free to break into homes, do street robberies and take whatever they want without interference. Yes, it is our indifference that causes these problems dontcha know.

Their favorite game is, Knock Out, where they travel in twos and suddenly punch an innocent person walking on the street with the intention to knock them out then run. They complain that they are stereotyped. It seems that a people can create their own stereotypes by their continual actions, then blame others for their failures.. And this is the most tragic factor of all.

This reminds us of the kid who killed his parents and then wanted the world to have pity on him because he was an orphan.

Blacks, you are better than this.There is a seed of greatness in every human being without exception, no matter where you live, what family you come from or whatever circumstances you are in. Seek that greatness by encouraging one another.Failing to do so infuriates me since I will be deprived of the talents you have within and your greatness. And oh yes, make time for God in your lives.

Obama also has allowed thousands of Muslims to enter and stay in our country where they have and ARE setting up ISIS training comps (28 since we last counted), yes on OUR soil, to specifically attack us in our own country.Many of those collect welfare provided to them by us. Plus Obama has installed countless Muslims in government, especially the offices of security, giving them access to top secret files. This is sheer madness, yet citizens just watch and snooze. For God's sake, WAKE UP!

Obama is a leftist. So why are Liberals called the "Left" and conservatives called the "Right?" A pastor friend directed me to Ecclesiastes 10:2 as translated by NIV: "The heart of the wise inclines to the right, but the heart of the fool to the left."

And thus sayeth the Lord. Amen.

The painting above titled, Freedom's Battle, is by A.F.Branco and available at coyboybyte.com.