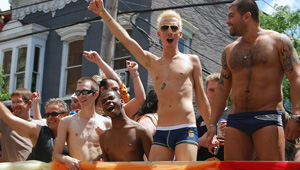 GRAND RAPIDS, MICHIGAN (7/10/15) – When the Gays accomplished their Supreme Court Ruling and ran out dancing in the streets and planting their rainbow flags of victory atop city halls, municipal buildings and the White House, it showed the accuracy of the rest of the story we predicted. My column had been published immediately after that ruling, stating that for homosexuals, this victory would only be the beginning, that they would never be satisfied.They would next demand that the Bible be declared a Hate Book and abolished.

Today a sodomite ex-con turned author, Bradley La Shawn Fowler (39 ) sued Thomas Nelson and Zondervan for publishing the Bible , which has references to homosexuality as a sin . He referred to 1 Corinthians 6:9. (?)

Fowler said that this violates his constitutional rights and has caused him emotional distress. He went on to babble that the earlier King James Version of The Bible, containing the term, "homosexual," is used by his family pastor and as a result, he has been outcast by his family.

He is suing Zondervan,he explained to WOOD TV in Grand Rapids, for compensation of, "20 years of emotional duress and mental instability." And it was THIS that drove him into mental instability? Just wondering.

His charges against Zondervan includes; "malicious negligence, strict liability, malice, libel, and violating his civil rights," and he is entitled to $60 million from them in compensation for his suffering. He is also seeking $10 million from Thomas Nelson publishing based in Tennessee. That totals $70 million to sooth his hurt feelings.

The lawsuit was filed in the U.S. District Court for the Eastern District of Michigan on Monday. Again, this is just the beginning following gay victory in the Supreme Court. They will next file lawsuit after lawsuit, continuously, until a court with a democrat judge complies with their wishes to make The Bible illegal, in homes, churches, schools, even in the trunk of the car. That is exactly the goal. The publishers have 20 days to respond to this lawsuit.

Do not think this cannot happen. Look at the case in Oregon with the Christian bakers, Aaron and Melissa Klein, who would bake a cake for a lesbian couple's "marriage" ceremony but refused to put the homosexual message on that cake that they demanded. They were fined $135,000 for not doing this cake with a message.

Sudden Thought: To be forced to work and labor upon demand, with no choice in the matter, is called, "Servitude." That is exactly what the slavery issue was all about. Forced labor. Slavery was finally abolished.

However, with rulings in the favor of a class of people who demand labor and services from unwilling citizens, hasn't the "gay" movement resurrected slavery in America? Legal minds – where are you?

But it is even worse. Oregon officials have demanded and stated that if that fine is not paid by this Monday, July 13th, that they will come and seize the home of that couple who have five children. This must not be allowed to happen.

Remember the Cliven Bundy incident when the government came with their troops to take over the Bundy Ranch in Nevada and kick the family off their own property that they had bought and paid for? In that case, citizen militias showed up spontaneously from all over the area and out of the area to surround that ranch to protect it and the Bundys. The government retreated. The patriots stood their ground as Senator Reid took an alka seltzer

The Kleins must NOT have their home illegally taken by these government thugs. Perhaps that family home, like the Bundy Ranch will be surrounded by patriots to greet those Gestapo's when they come to storm that home. We will be watching Monday.

Our thanks to Chaplain Denny Quinta who alerted us to this story and to Christian Post and Tea Party News Network – for breaking the initial story today.

Rev. Austin Miles is a chronicler of today's events for tomorrow's history.