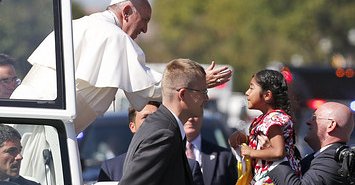 WASHINGTON, D.C. (9/24/15) – Is anything real anymore? Apparently not. We learn that the sudden opening of borders was staged, and that protests like the ones in Ferguson, were staged and the participants, holding professionally printed signs, were actually paid by George Soros to be there, along with the riots breaking out all over the world in an effort to destabilize countries, which weakens them.

This means that all of the disruptions and protests against society are not spontaneous as we are led to believe. They are purposely staged to change thinking on an issue of importance to the Communist leaders.

Now it has been learned that the little 5 year old girl, Sophie Cruz, who rushed in the street toward Pope Francis in D.C. to hand him a note regarding rights of immigrants during the popemobile parade, was indeed staged by members of Los Angeles-based immigration rights groups.

So like all the others, this did not just happen but was planned and scripted in an attempt to push an ongoing political agenda by opening the gates to allow illegal immigrants into the U.S. to receive all benefits, paid for by taxpayers.

The purpose of actions such as this is to gain publicity and worldwide attention that might bring wide support to change all laws and restrictions regarding immigration.

The leader of the group who uses children to push their political agenda is Juan Jose Gutierrez, who heads The Full Rights for Immigrants Coalition. His use of the children of immigrants is to soften their push for an immigration overhaul to the pope.

Still, this little 5 year old had to wiggle her way onto the parade route and get the pope's attention. She was intercepted by Secret Service officers who stopped her and started to take her back to the sidewalk when Pope Francis motioned for them to bring the child to him. When in direct contact with the pope, she handed the pope a note about wanting her parents to not be deported.

Absolutely no blame is being put on the child. Most children would do almost anything to help their parents. This is understandable. However, no child should be used as a tool to accomplish a political agenda that benefits adults any more than children being used as shields during battles.

According to reports, the group had been preparing the little girl for about a year to run to the popemobile to deliver the message about the hardships of illegal immigrants living in the U.S.and to personally ask the pope to basically intervene.

The same organization headed by Gutierrez pulled this same stunt last year in Rome, using a stage-managed 10 year old, Jersey Vargas, to rush to the pope to plead with him to help free her immigrant father from a detention center. These days, nothing seems to be as we see it to be.


Saturday (5/25/15) was Naked Day in San Francisco. That's right, a time when everybody can roam the streets letting everything hang out. They requested a permit from City Hall for that romp in the raw, and....the city granted it. And this was the day that the Prime Minister of India arrived in the Bay Area. No wonder world leaders think the U.S. is nuts.

And yes, they have the 'right' to be served in all public places including restaurants. I kid you not. Only question, where do they keep their tip money?


Huge outrage. Afghanistan soldiers cannot control their lust for little boys, grabs them and sodomizes them whenever and wherever they want. Over there, child rape is perfectly OK. An outraged American soldier came across an Afghan sexualizing a little boy, and beat up the offender. What does Obama do? He punishes the soldier who saved a little boy from further abuse with a court martial. This can only be expected from an administration with an LGBT supporter and participant sitting in the Oval Office.