October 6, 2015
ROSEBURG, Ore (10/4/15) – Valuable time was squandered waiting for evidence of truthful reporting on the Umpqua Community College (UCC) Oregon shooting that left 8 students and a teacher dead with many wounded. To find that truth was a useless pursuit. 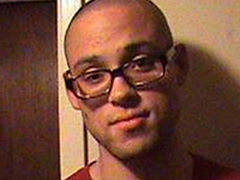 The first clue that this was a bogus report, immediately following the shooting, identified the 26 year old shooter as simply a misfit. The Media reported that the shooter, among other things, was part of a White Supremacy group.

HOW'S THAT AGAIN? The shooter, Christopher Sean Harper-Mercer is (was) BLACK! Well, at least half black. He has a black mother (whose photo has never been shown) and a white father from England whose photo WAS published.

A black man belonging to a white supremacist group would make as much sense as a black man joining the Ku Klux Klan. But the ever trustworthy Communist news media reports their version of news as truth, publishing what they want you to hear.

This type of deceptive "reporting" conveniently takes attention off the real root cause of the murders of Americans, while misdirecting citizens to a characterized misfit with mental problems. The Muslim connection to this horror has been hidden completely.

This writer picked it up the moment the news came out that stated the killer asked the students if they were Christian. Those that said yes were shot and killed on the spot. Those who were vague in their answer were shot in the legs.

In Indonesia, Muslims stop tourist sightseeing buses, go aboard and ask everyone if they are Muslim. Those that say, 'yes' are told to quote a verse in the Koran to prove it. Those who are Christian are taken off the bus, lined up and shot dead. This is an Islamic tactic which continually plays out in Muslim countries. So this points out what is at play in this latest massacre on U.S. soil.

Why has the photo of the killer's mother been concealed? Hint-she's black. Her son looks mostly white. And since they lived in an apartment, how could that mother not be aware of the arsenal of weapons her son had there? Plus, she was aware of her son's mental illness, a condition someone must have to link themselves with people who have no human feelings, who want to only torture and kill, while destroying property, especially museum pieces of history that could never be reproduced.

To re-enforce the Islamic connection to this killer, he had a close friend on face book, Mahmoud Ali Ehsani, certainly a follower of ISIS and supporter as one can see clearly by looking at his face book page. It is all there. He is the one the shooter was closest to in his life.

So, why the stall in identifying the killer for what he is? If you remember when the Ft. Hood massacre took place, Obama refused to identify the killer, who was an officer on that base, for what he was, a Muslim. Obama called that event merely a case of "workplace violence," while instructing us all to not jump to conclusions.

And Obama is trying to block this killer's actual identity. He feels totally protective of all Muslims and Islam. And in so doing, he just made an astonishing truthful comment....now listen to this; "This killing will be politicized." It is a telling confession. The political side is to force the confiscation of all guns owned by citizens. Not the criminals mind you, but law-abiding citizens, making it easier to put America under armed Communist rule.

The verification of the Oregon Shooter being a Muslim or not being a Muslim, will be coming, even though we already have our suspicions.

Indeed, Obama is behind the dictate to never, never speak badly about Muslims, it might hurt their feelings after all. We can't have that. Otherwise we will earn the label of Islamophobe. So they can kill and behead Christians, are bound and determined to kill all of us, but we should never speak badly about them. When presidential candidate, Dr.Ben Carson, stated that he would not want to see a Muslim as president, all hell broke loose. We must never speak negatively about a Muslim doncha know. Besides, Islam is a "religion of peace."

It is strongly felt that Obama is a Muslim. He was born and raised by Muslim parents in Kenya, went to Islamic school there, declaring himself as Muslim, and stating in a TV interview: "...according to my Muslim faith." On the day of the Ft. Hood massacre by a Muslim, Obama was seen praying at a mosque, probably proclaiming, Allahu Akbar!" We published the photos taken at that mosque at that time.

Remember, when a teenaged thug who had just left a robbery of a grocery store, assaulting the owner, then challenged police officers, charged at them, tried to take their guns and was shot and killed in the process? The news media, in particular, The Associated Press, published 200 news stories about this shooting, stating that this (innocent) kid was an 'unarmed black teenager shot and killed by a WHITE police officer.' They hammered that home so effectively that black riots took place, complete with looting and destruction of property causing chaos in cities all over America. It also directly caused some murders of whites, including police officers.

And the very purpose for all of this, is to destabilize America. This serves to weaken America, so the Communists will have an easier time taking over this country which is the goal. This is all well thought out.

So is Obama a Muslim? There is debate on this issue. For sure he is a huge supporter of Islam. Indeed he has opened the gates of America to allow 100,000 Muslim (refugees) into America to set up their shops, while at the same time refusing to allow Christian refugees to take asylum here. This is nuts.

However, a personal inside contact in D.C. told me that Obama is not a Muslim. We DO know for certain that Obama is a dyed in the wool Communist. It was Communist Party, USA who staged the silent coup (as I was told would happen while behind the Iron Curtain) that PLACED him in the Oval Office. Again, Obama was NOT voted into office, he was PLACED there.

Forget expecting any truth from the so-called, 'main stream media.' They are all propaganda machines. You will never get the truth there, with the possible exception of The Wall Street Journal

Accurate truth-telling news sites are found on the internet, such as: Breitbart.com, www.RenewAmerica.com, www.AmericanProphet.org, www.CapitolHillOutsider.com, and my own site; www.revaustinmiles.com. There are some others as well, including The Drudge Report.

On these sites you will get truth with the real story that has in each case, been deeply researched. So when you see a newspaper and an intriguing headline, be sure to check the above listed news sites to see what the story is actually about. Then you will be truly informed with the accuracy of every story published.

So Is Obama a Muslim? He is the first registered Communist to sit in the Oval Office, and the first homosexual to occupy the White House, meaning that this could be awkward. If he is indeed the first Muslim to occupy D.C. as well as being the first "gay" there, he would be required to cut off his own head according to Sharia Law. If they were to sell tickets to that event, the budget problem would be solved.