November 25, 2015
Most Bible believers are somewhat familiar with this verse, even though not seeing the depth it reveals. Ephesians 6:12 states: "For we wrestle not against flesh and blood, but against principalities, against powers, against the rulers of the darkness of the world, against spiritual wickedness in high places." Even the most biblically deprived individual would understand that to mean, Satan. 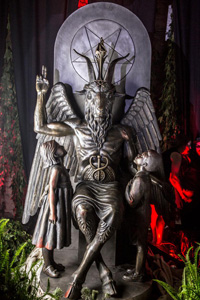 Yet, many deceived people choose to follow and worship Satan who is the master deceiver that controls them to perpetrate evil. They are calledSatanists and have grouped together all over the world, holding rituals and causing chaos.

Muslims call the United States 'the great Satan. Even first semester psychology students know that one accuses others according to their own standard of conduct. In a recent story (link below) it was shown that Muslims have a direct relationship with Satan. This has just been CONFIRMED with a breaking story out of WorldNet Daily.com.

Less than a week after the attacks in Paris, Satanists publicly reached out to their brothers of Islam, offering to help protect them during the backlash that has resulted against them. For example, the Satanists said, "If there is anyone in the San Jose region who is Muslim and afraid to leave their home out of fear of backlash, don't hesitate to reach out to us. We would be glad to escort you where you need to go without advertising our presence."

They also stated that they would help in doing errands for them and delivering groceries. This press release came from Lucien Greaves of San Jose Chapter of the Satanic Temple.

Muslims and Satanists have been joined at the hip from the very beginning. Both thrive in lies, destruction, thievery and indiscriminate murder of anyone, simply for the joy of murder, which includes children in school, people in nursing homes or someone simply having dinner in a restaurant. These, in Muslim language, are designated "soft targets," meaning unarmed victims, no risk of injury to the killers. This is plain evil and the father of evil is Satan.

And it is interesting to note that Muhammad claimed to have been visited by the Angel, Gabriel who told him to preach. We find this interesting since Gabriel is the Arch Angel of Israel.(?)

The god he worships, Allah, an Arabic term for god, was taken from Alilah, the moon god and shortened to the Arabic term, Allah. The god Muhammad created would have been a god of Satan since this invented deity instructs his followers to slay innocent people and if they themselves are slain carrying out this gruesome task, the 'martyr' will have 72 virgins waiting to give him sexual satisfaction for all eternity. Their god represents evil and sexual perversion.

The Satanists who are tightening their bond with Muslims, tried recently to install a bronze Baphomet (Satan) statue next to the Ten Commandments monument in Oklahoma. Yes the worshippers of Satan have become bolder since Islamists have caused so much evil and fear that it has encouraged them to come out front and center.

In John 8:, Jesus might have been speaking about the Muslims who claim Abraham as their own since he fathered Ishmael who started the Arabic nations which became Islamic.

In verse 23, he stated to the Pharisees, "Ye are from beneath; I am from above." It gets more to the point starting at verse 42: "If God were your father, ye would love me: for I proceeded forth and came from God; neither came I of myself, but He sent me."

Then He hammers it home in vs. 44: "Ye are of your father the devil, and the lusts of your father ye will do. He was a murderer from the beginning, and abode not in the truth, because there is no truth in him. When he speaketh a lie, he speaketh of his own; for he is a liar, and the father of it."

As is known, Muhammad had sex with children and married Aisha (also spelled, Ayesha) when she was 10 years old. However that is accepted in the Muslim culture. So it would not have been a big deal at that time, or even today.

We are told that the majority of Muslims are good people and a people of peace, even though they follow the Qu'ran. Here is an example of the Qu'ran:

Quran (8:12) – "I will cast terror into the hearts of those who disbelieve. Therefore strike off their heads and strike off every fingertip of them." (No reasonable person would interpret this to mean a spiritual struggle)

And let's not forget this peaceful passages...

Quran (8:15) – "O ye who believe! When ye meet those who disbelieve in battle, turn not your backs to them. (16) Whoso on that day turneth his back to them, unless maneuvering for battle or intent to join a company, he truly hath incurred wrath from Allah, and his habitation will be hell, a hapless journey's end.

Quran (8:67) – "It is not for a Prophet that he should have prisoners of war until he had made a great slaughter in the land..."

Quran (9:14) – "Fight against them so that Allah will punish them by your hands and disgrace them and give you victory over them and heal the breasts of a believing people." Humiliating and hurting non-believers not only has the blessing of Allah, but it is ordered as a means of carrying out his punishment and even "healing" the hearts of Muslims.

There are many, many more. Several references are made to slay those who refuse to convert to Islam wherever they are, to lay in wait for them. Their "Holy Book" also says it is also permissible to LIE to further Islam. Yes, a god of lies as the Scriptures tell us.

Every Muslim reads and lives by the Qu'ran which instructs evil. Any Muslim who does not denounce Islam, reads the Qu'ran and continues to go the mosque, where hatred against humanity is taught, cannot be trusted.

JOURNALIST-TAKE NOTE: There are many 'clubs' of terrorism among Muslims. Whenever such an attack happens, do not state that ISIS, ISIL, IS or even Islamic Fanatics are responsible. It is MUSLIMS who are responsible, not any one organization. It is a PEOPLE not an organization that is responsible along with a violent religion called, Islam. Every single person taking part in these attacks against civilized people are MUSLIMS and that is how the attackers are to be identified – period..

Military leaders throughout the ages have stated that the first thing that must be done when under attack, is to identify the enemy. It is past time to do that. Let's be honest about this identity. And the event should be honestly described, not 'workplace violence' as Obama described the massacre of our service personnel in Ft. Hood by the MUSLIM officer.

War has been declared against the civilized world by a growing group of stone-age savages who, it has been shown, is under the direction of Satan himself, the one they have chosen to follow. Our prayers for Muslims can be prayers of deliverance and outright exorcism. Forget the PC. Cut to the chase and let this terror be stopped.

Our thanks to journalist Douglas Ernst of World Net Daily for breaking this initial story.

To see the story referenced above showing the connection between Satanism and Islam click this link: http://revaustinmiles.com/index.php/more/818