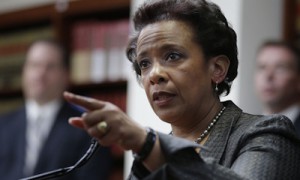 WASHINGTON, D.C. 12/4/15 – Obama's lap dog Attorney General, Loretta Lynch, demonstrated how idiotic and traitorous the entire Obama Administration has proven to be. On Thursday, yesterday, the day after the horrendous Muslim attack on a county health office in San Bernardino, California, that killed 14 innocent people and seriously wounded 21, she was telling a pro-Muslim group: "We stand with you." Just ponder this a moment.

The occasion was a 10th anniversary dinner for Muslim Advocates, a 'civil rights' organization. PAUSE FOR TRANSLATION: Advocate means' civil rights' for Muslims, putting them on the same shelf as Americans only they are supported by us, getting welfare and housing while demanding the right to establish their own law (Sharia) in the areas they live in and gradually spreading it out to cover an entire community or city, putting them in total control

Their law means having as many 'wives' as the care to have and are at liberty to have sex with children, indeed they can marry 8 year old girls. This culture must be accepted by citizens.

They do not have to assimilate or obey our laws, but bring their own living habits and demands wherever they settle. That is what a Muslim advocate does.

Lynch (there will be no titles of respect) stated that her 'greatest fear' is the 'incredibly disturbing rise of anti-Muslim rhetoric.' According to GOPUSA, she will stop such hate speech by prosecuting anyone guilty of rhetoric which can spur on acts of violence and vowed to use her Justice Department to protect Muslims from "violence and discrimination." Could she possibly work in some Christian protection along with this?

Listen carefully: she says, we must fully accept Muslims without discriminating against them, no matter what their lifestyle is, what they do, or who they do it to. How's that again? While we are still burying the bodies of those murdered by Muslim jihadists two days ago in San Bernardino, California, Obama's Attorney General is telling us that we are not to speak badly of Muslims, or else? She made it clear that she will prosecute those who do.

According to The Daily Caller; "Lynch, while speaking to the Muslim advocacy group, urged 'Muslim parents to contact the Justice Department and the Department of Education if their children are bullied at school.'

She rambles on to state: "Other areas in which we are seeing growing areas of concern, specifically involve our children, (?) and the issues of bullying and the school," which she proclaimed during a question-and-answer session at that event. She went on to state: "We saw bullying a lot in the New York area (right after 9/11), where there would be a backlash against the Muslim community in general." Well...duh! These stone-age savages had just killed over 3000 of our people in a cowardly sneak attack that no one expected. And we are supposed to only state what great people they are?

To further address what she said is a growing problem, the bullying of Muslim kids, Lynch urged parents to contact the federal government. No doubt, with the Islamic sympathizer in the Oval Office, she will get all the cooperation she needs. She might even get the National Guard to come to the rescue to arrest the "bullies" and their parents.

She wound it up by saying: "My message is not to just the Muslim community, but to the entire American community, which is this: we cannot give in to fear that these backlashes are really based on.

May we inform you, Ms. Attorney General, these backlashes against Muslims are not based entirely upon fear, but of wisely exercising extreme caution when they are near, knowing by their consistent behavior and actions, that they have the propensity of continuing the same actions of murder and destruction. That has been proven over and over.

It is unsettling that I must even write this story detailing the insanity of our present administration. This entire administration is nowhere near being legitimate. It was Communist billionaire George Soros along with the entire Communist Party USA (CPUSA) that force-fed Obama to America. He was not voted in! Obama was forced into office in a silent coup.

Obama intends to pull an executive order to declare himself "president for life' next year before the election. There will no doubt be a crisis he can use to achieve this. If there is no legitimate crisis, he will create one so that people will think he needs to stay in office.

IF the people rise up, lock and load, and gather, Obama and his handlers will then humbly rescind his order and allow the 'election' to proceed. Hillary Clinton will be the next one put in office, as she will continue the very policies Obama has created. Again, she will NOT be voted in, but placed there by the very same forces and powers that placed Obama in the Oval Office. We all lose as a result.

That is UNLESS patriots take action by first flooding your congress and senate representative along with the Speaker of the House by phone, fax, or email, to either impeach Obama or escort him out under arrest for treason. It is entirely up to those of us who do not want to see The United States of America go down into the hole of other third world countries.

Our thanks to The Daily Wire and GOPUSA for breaking the original story.