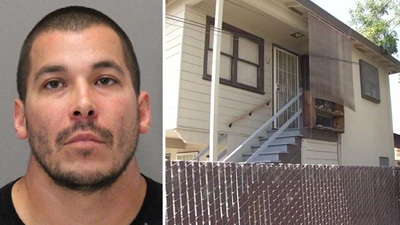 SAN JOSE – 8/26/16 – Matthew Zabala always had a short fuse, one that put him in prison 6 years ago for physically abusing his 4 year old child. He was arrested and charged with assault of a child and domestic violence. After he served four years in a county jail, they let him keep his children, including a little boy, all of whom should have been taken away from that house.

This 32 year old was and is ready to explode at the slightest provocation, including being awakened from sleep, either from a nap or during the night or early morning.

When a man drinks, his mind gets dull. leaving his eyes and brain drowsy. If one even takes a glass of wine before going to bed, even though it is pleasant to drink and relaxing, making it easy to go to sleep, it also makes every wake-up a traumatic groggy event. I have seen drinkers yell and curse when the wake-up call comes in the morning. Drinking makes one a useless soppy rag who cannot function with grace and productiveness. And it can make one cruel.

This is why the chaplains I train are instructed to not drink any alcohol since we must always stand ready to serve at a moment's notice or when awakened from a sound sleep with a call for help. We must be able to hop up and serve at any time.

Zabala's little girl, Mila, who was born six weeks ago would cry for something to eat. This is the only way she could communicate that she was hungry. This caused Zabala to wake up violently. He slammed his baby to the ground. Instead of using the arms God gave him to protect his daughter, he instead used them to harm her.

This past Sunday, little Mila had a cardiac arrest – yes at the age of six weeks, and was taken by ambulance to the Emergency room of the Valley Medical Center. Upon examination it was shown that she had multiple fractures (14) including broken ribs and a crushed skull. All from the hands of her self-centered father, who could not be disturbed.

Early this morning, just before 1 A.M., little Mila died. The horrible beating she endured shut down her tiny body. Her father has been arrested and held on a million dollar bond in the Santa Clara County jail, charged with murder. He is facing a stiff prison sentence. Considering the savage crime he committed against a helpless infant, he should never get out.

This beautiful little innocent baby, who had done no wrong, nor had she even committed a sin, was simply inconvenient for her father who only thought about himself, and she died at the hands of the one she should have been able to trust the most. Why? Because, she 'disturbed' him. I am grieving as I type this. Yes, deeply grieving. How could any human being do such a thing? How could anyone harm a little baby?

This inhumanity we are seeing against children is encouraged by the Planned Parenthood Abortion Factories where it is a "woman's right" to slaughter her own baby that might get in the way of carrying out her life with no encumbrances. This has become so evil that the Democrats who agree with this infanticide and display such a hatred of inconvenient babies, that they have voted, yes voted, against giving any kind of anesthesia to that ready-to-be-born infant to dull the horrific pain they experience as they are dismembered limb by limb (easier to get them out of the womb that way) while they are still very conscious. They feel it all. And yes, they silently scream.

Indeed, it gets worse. If an infant survives an abortion, they do nothing to help that baby but leave it on a cold slab unattended to die. If it does not die, they smother the baby to death. Yes this is MURDER FOR HIRE by Planned Parenthood and other abortion factories which rakes in big profits.

What is outrageous is that we the taxpayers are forced to pay Planned Parenthood, yes, forced to pay for these ghastly murders which comes out of the money we have worked for and the government has taken, even though this goes against all our sensitivities and our religious beliefs.

They call this savage barbarity, a Woman's Choice with their slogan being, Pro-Choice, which is the platform of the Democratic Party. CHOICE? What about the baby's choice? They naturally want to live.

Now the big question: Being a Chaplain, what if I was called to meet with this man? It would be tough, but I would be compelled to say, 'yes.'

In order to do that, it would be necessary to pray earnestly for extra grace, and to be so filled with God and His Holy Spirit that my only concentration would be on Him.

He would enable me to perform my duties, not thinking of what this man did, or how he savagely beat this baby, but talk with him about what his life offers for the future and how he would like for his life to be in the future. His only choice would be to give his life to Jesus and take it from there. Only Jesus can change one's life and set it in a new direction.

Meanwhile, think how each presidential candidate would handle this situation regarding the baby and the man who killed her. One candidate for sure, who supports Planned Parenthood and is celebrated by that organization, would simply suggest that abortion rights be expanded and the man who killed the baby should not be charged. Is that what we want in The Oval Office? THINK! . Your vote is CRUCIAL for our country.

Photo Caption: Matthew Zabala and the house where he murdered his baby