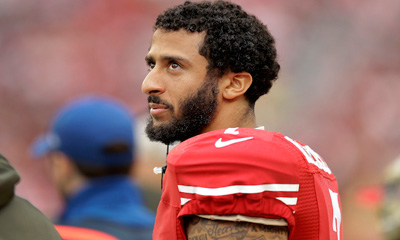 There have been sit-down protests meaning sit-ins at organization offices, universities, blocking highways and freeways by sitting across them stopping traffic as the traffic jam builds to inconvenience (punish) as many people as possible. But this one is different.

A millionaire NFL football player, Colin Kaepernick, stood for his cause by sitting down during the National Anthem before a game. By doing so he demonstrated his contempt for the flag, the country it represents and the veterans who served under that flag. "Besides," he belched, "There is NO liberty and justice in America for black people."

When asked by news media to explain this, he responded, "I am not going to stand up to show pride in a flag for a country that oppresses black people and people of color," Kaepernick flatulated. "To me, this is bigger than football and it would be selfish on my part to look the other way. There are bodies in the street and people getting paid leave and getting away with murder." He was referring to cops who have killed someone who was attempting to kill them.

And what is more, he stated publicly that he would refuse to show respect for the flag of our country for the rest of the season. A responder to the early story, going by the name "Paul," was also baffled by his lamentations.: "Here's a BLACK guy, making MILLIONS of dollars playing a damn GAME, living in a nation with a BLACK president...claiming that this country oppresses blacks. Wow! I could use some of that "oppression" myself. Where's mine?"

Kaepernick recently converted to Islam through his Muslim girlfriend Nessa. He joined an organization that has declared allegiance to a cult that boasts that they will destroy America and its people, the very America and people who made it possible for him to become a recognized celebrity and a millionaire. Yet he grumbles about "the oppression of blacks." When we see the rich black sports figures, black movie stars and successful black businessmen and women, it is obvious that something is missing in his observations.

People who refuse to prepare for their goals in life by taking courses, going to college and acquiring the skills to pursue their dreams have been imprisoned by their own sense of entitlement and reward without effort, with the pumped up belief that the white people have mistreated them and at one time made slaves out of them, therefore they OWE black people anything they want whenever they want it.

First of all, it was the MUSLIMS that brought slavery to America. They captured blacks in Africa and shipped them to America for a price per slave.

However it was the WHITE PEOPLE who put an end to slavery, even fighting a horrific civil war to end it. Yet the present day blacks have been brainwashed by Marxists to create a divide between the races with the goal to weaken the entire country which will help them succeed in making us part of the one world government under Communist control, which will turn the U.S. into a third world country.

The dumbest statement of all was recently uttered by Michelle Obama at a public event pontificating that she and Obama, and their kids, live in a house built by slaves. NO IT WAS NOT! That is a propaganda LIE. The White House was built by skilled craftsmen and artisans. Some of the labor, hauling stuff back and forth was provided by slaves. They did NOT build it.

One of the beefs of that community is that of "White Privilege." Yep, being white means that one is handed all successes and desires on a silver platter, just because they are white. Nobody else has such rights. Residue of a bull!

Colin Kaepernick who is 28, was born in Milwaukee on November 3, 1987.. His father was black and his white mother was Heidi Russoa. His parents were never married. His existence began with an in-and-out-drive- through sex caper which resulted in pregnancy. They split 5 weeks after he was born. Following the split, he was abandoned and adopted by Rick and Tenna Kaepernick which explains the origins of his name.

Now get this. His adopted parents were WHITE. They did everything for him, encouraged him and put him through school so he would make for himself a successful life. So, the 'white privilege" complaint he moans about is a manipulative lie because he learned that success, no matter what color you are, is waiting to be claimed providing the individual puts effort into that pursuit. And that is there for ANYBODY no matter what your color or zip code is.

Naturally, Kaepernick Thumps Trump since the presidential candidate has stated that he will put severe restrictions on any Muslim entering this country, meaning fully vetting them along with all other immigrants before allowed entry, which is only common sense considering their habit of blowing up and killing 'infidels,' those who are not Muslim that catered to them.

Kaepernick, a Muslim, objects to this caution. Muslims should be allowed to flow freely wherever they want to go including entering America.

And NFL player Colin Kaepernick refuses to respect our flag under which he found success.

He signed a $126 million dollar contract, giving him a $12.3 million signature bonus and would receive $14.5 million each year. That would build annually, reaching $18.8 million per year. Most don't earn that much in a lifetime.

America gave him this opportunity for fame and fortune. Yet like a true Muslim, he turns on the very ones who helped him, trashing the country that afforded him real privilege.

PERSONAL MESSAGE TO KAEPERNICK: The writer of this column is a VETERAN, whose service to this country resulted in lifelong health problems after being exposed to Mustard Gas which charged through my body, tearing apart my insides. In all these years it has been rare to not be uncomfortable day or night. I see fellow veterans in the VA Hospital, many missing limbs and mentally scarred by fighting for the rights of Americans to live their lives and pursue their dreams.

As for you, you little misguided spoiled brat, who insults us by refusing to salute the flag we all served under, this is totally unacceptable. Many like me will never again support the 49ers, even to watch them on TV until you apologize or better yet, are fired from the team. That would be the wisest thing for them to do. Nor will we buy anything from your sponsors.

You poor little oppressed thing. Since it is so tough for you living in the U.S. we will open a go-fund-me-account to buy you a one-way ticket to fly to Syria or any other Muslim country where you will be happy. Those funds will come in rapidly. You have offended the United States of America. Now get out.