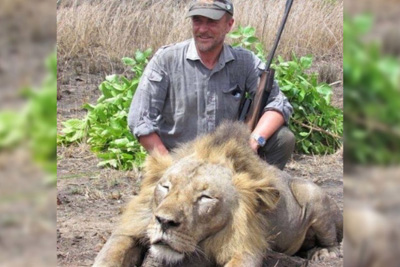 Radio Host, producer, TV personality and national columnist Jerry Newcombe alerted us to this news item that took place Saturday. The story he sent absolutely made my day. It was a classic case of poetic justice, which we are seeing more and more of these days. CHEERS!

Italian trophy hunter, Luciano Ponzetto, posed happily on-line with his trophy kills, beautiful animals who posed no threat and were simply going about their lives before being cruelly cut down by a REAL beast.

This heartless murderer, who killed innocent animals in order to cut off their heads and display them in his home would proudly announce that he was a big game hunter, as if that were a status symbol. This made him feel like a man and a conqueror. This coward was neither.

There was nothing big or grand about this misfit mental case. No animal stood a chance with him since he was armed with high powered weapons that would tear them apart on impact. So this was a totally one-sided "conquest."

Ponzetto had just returned from another cruel hunting trip in Canada and was hunting with friends in Colle delle Oche near the northwest city of Turin on Saturday.

During this latest killing spree, according to The New York Post, when he made each kill, this deranged creep would pose with the dead animal, with a sickening victory smile on his face...see photo.

For his hunt in Italy, Ponzetto slipped on ice and fell 100 feet down a canyon splattering onto the rocks below. He died instantly from the fall. Pity. The magnificent animals he cut down in cold blood did NOT die instantly, but suffered intensely for a period of time that seemed to be an eternity for the animals, something these sickos seemingly take pleasure in.

His body was recovered by helicopter and taken to a local hospital even though nothing could be done since he was already dead.

It is to be noted that these mentally unstable people actually enjoy causing living creatures to suffer. They seem to enjoy that feeling of 'power,' the same as the Nazis who tortured their captives. In countries like Venezuela, young soldiers are taught that when they torture someone, causing them to suffer, they become a man.

What is shocking, is that this sick maniac, Luciano Ponzetto was...now sit down...a veterinarian (!), and states that he "loves animals." Yea, he loves them dead with their heads hanging on the walls of his den. And people brought their pets to him? Surely they did not know who and what he actually was.One cannot love animals who takes pleasure in bringing unspeakable suffering to them.

It is too bad that this jerk did not linger while suffering after he fell down that canyon. The animals he murdered for his own ego certainly did.

At the Brooklyn Zoo in New York, there is an exhibit of scary animals. Then visitors are ushered into a dark special enclosure, where they are to see the most dangerous animal on earth. It is a spooky encounter. Everyone was ushered into the dark room uneasily. After a time, the light came on and all were standing in front of a mirror, to see the most violent dangerous animal on earth. Yes, the human...us.

The death of this Italian trophy hunter is not a case where the world was deprived of a life, but rather freed from the despicable life of a man with no heart that the world is better off without. Karma has struck once again.

Final Note: Animals are God's creatures. They have the same feelings and emotions we have; They experience pain, anxiety, fear, love, happiness and grief, exactly as we do. The next time you are injured and in excruciating pain, remember that animals feel the same full impact that we feel. Luciano Ponzetto should be buried in asbestos undergarments. Where he is going he will need them.