Rev. Austin Miles
Behind the pageantry of the Tomb of The Unknown Soldier

May 30, 2018
The nation took this past weekend to remember all the young men and women in military service who died serving our country. I have conducted many Memorial Day services over the years and still feel the impact every time I do.

And I shed some quiet tears each time. I am an army veteran, having served during the Korean Conflict. My company was exposed to Mustard Gas.

That is a horrible experience. It is like a blow torch scalding through every gut in your body. Two young soldiers died right next to me. The rest of the company died within a short time of their discharge. I was the only one in my company who survived. And I've fought severe health problems ever since.

On Jeopardy the other night, in view of Memorial Day, the final question was, How many steps does the guard take during his walk across the Tomb of the Unknowns? – All three of the contestants missed it –

The continual ceremony of The Tomb of The Unknown Soldier in Washington, D.C. should be seen by everyone. It is an awesome sight of rightful respect shown to our service men and women.

Not everyone knows these facts that the Jeopardy contestants could not answer. So here they are:

Tomb of the Unknown Soldier

1. How many steps does the guard take during his walk across the tomb of the Unknowns and why?

Twenty one steps. It alludes to the twenty-one gun salute, which is the highest honor given any military or foreign dignitary.

2. How long does he hesitate after his about face to begin his return walk and why?

Twenty one seconds for the same reason as answer number one

His gloves are moistened to prevent his losing his grip on the rifle.

4. Does he carry his rifle on the same shoulder all the time and if not, why not?

He carries the rifle on the shoulder away from the tomb. After his march across the path, he executes an about face and moves the rifle to the outside shoulder.

5. How often are the guards changed?

Guards are changed every thirty minutes, twenty-four hours a day, 365 days a year.

6. What are the physical traits of the guard limited to?

For a person to apply for guard duty at the tomb, he must be between 5' 10' and 6' 2' tall and his waist size cannot exceed 30.' Other requirements of the Guard: They must commit 2 years of life to guard the tomb, live in a barracks under the tomb, and cannot drink any alcohol on or off duty for the rest of their lives.

They cannot swear in public for the rest of their lives and cannot disgrace the uniform {fighting} or the tomb in any way. After two years, the guard is given a wreath pin that is worn on their lapel signifying they served as guard of the tomb. There are only 400 presently worn.

The guard must obey these rules for the rest of their lives or give up the wreath pin.

The shoes are specially made with very thick soles to keep the heat and cold from their feet. There are metal heel plates that extend to the top of the shoe in order to make the loud click as they come to a halt.

There are no wrinkles, folds or lint on the uniform.

Guards dress for duty in front of a full-length mirror.

The first six months of duty a guard cannot talk to anyone, nor watch TV.

All off duty time is spent studying the 175 notable people laid to rest in Arlington National Cemetery. A guard must memorize who they are and where they are interred.

Among the notables are: President Taft, Joe E. Lewis [the boxer] and Medal of Honor winner Audie Murphy, [the most decorated soldier of WWII] of Hollywood fame.

Every guard spends five hours a day getting his uniforms ready for guard duty.

In 2003 as Hurricane Isabelle was approaching Washington, DC , our US Senate/House took 2 days off with anticipation of the storm. On the ABC evening news, it was reported that because of the dangers from the hurricane, the military members assigned the duty of guarding the Tomb of the Unknown Soldier were given permission to suspend the assignment.

They respectfully declined the offer, 'No way, Sir!' While soaked to the skin, marching in the pelting rain of a tropical storm, they said that guarding the Tomb was not just an assignment, it was the highest honor that can be afforded to a service person.

ETERNAL REST GRANT THEM O' LORD, AND LET PERPETUAL LIGHT SHINE UPON THEM.

God Bless and Keep Them

We can be very proud of our young men and women in the service no matter where they serve.

IN GOD WE TRUST 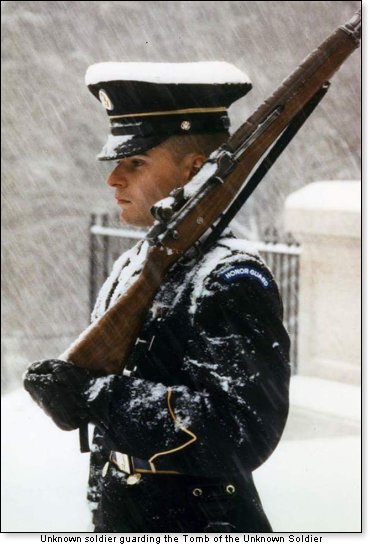