July 27, 2019
This writer who loves animals would always be disturbed if anyone charged with animal cruelty walked out of a courtroom without even a slap on the wrist. We kept pushing until actual animal courts were established to handle such cases and a new specialized law practice has been created, and rightfully so. There are three animal courts that we know of even though more may have been added. And there is now an "Animal Legal Defense Fund. And finally, animals are being recognized as viable beings with feelings.

The plaintiff in this case is, yes, an 8 year old horse, formerly named Shadow, and is now known as "Justice." At this moment, legal experts and scientists have submitted documents to an Oregon court supporting Justice. The abuse he suffered while in the custody of one Gwendolyn Vercher is shocking to society and outrageous to comprehend. It was argued that this case is "consistent with the best reading of Oregon's existing law" as well as recognizing Justice's standing, which will not, as the trial court feared, open the floodgates for animals to assert claims in other contexts. 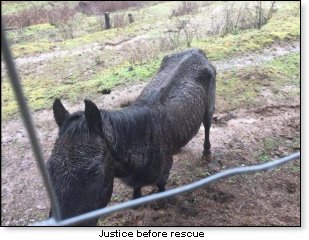 The reader will be spared the worst descriptions of the abuse since knowing such details bring many to tears and anger as it does this writer. Often when I accidentally get a glimpse of a video of animal cruelty it is impossible to sleep that night. However, some description is necessary to show the seriousness of this. Justice, the stallion was suffering from rain rot, afflicted with lice and was 300 pounds underweight when he was rescued as well as having scabbed skin, with his genitals so frostbitten that they might still require amputation. And he was clearly underfed. How could any human being inflict such suffering upon an innocent animal? This makes my blood boil!

According to the lawsuit, Justice's treatment by Ms. Fercher left him with "permanent physical and psychological injuries which means he will likely never find a new permanent home. Gwendolyn Vercher – remember that name – pleaded guilty to criminal animal neglect last summer and was sentenced to three years of probation, preventing her from owning any pets or livestock for five years. Let me jump in here: Gwendolyn Vercher should NEVER be able to own an animal again.....
N E V E R! 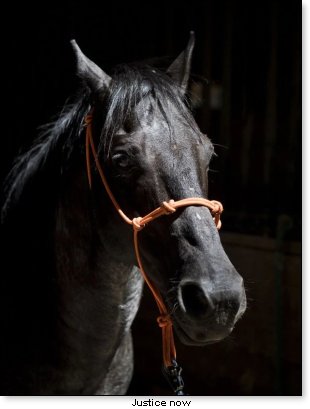 Justice is now living at a horse rescue in Troutdale. The Quarter Horse is suing his former Washington County owner for $100,000 in damages for veterinarian care, in a rare case in which an animal is listed as the plaintiff in legal action against a guardian. One of the attorneys, Sarah Hanniken who is representing the horse said that Justice should be allowed to recover the costs of damages for pain and suffering just as a human victim would.

The Oregon Legislature clearly established an anti-cruelty statute for the safety and protection of animals, the attorney said. "Victims of crime can sue their abusers, and animals are sentient beings that are recognized as victims under Oregon law. So with that premise, we've come to the conclusion that animals can sue their abusers and we're confident of our stance in this case." So says attorney Sarah Hanniken with whom we totally agree.

Richard L. Cupp, a Pepperdime University Law Professor, emphasized that he supports Oregon's progressive animal cruelty laws and rulings. And legislation is a more reasonable way of expanding animal protections, he said. Justice's case, for example, could be addressed through a law requiring an abuser to cover an animal's future care. That would NOT be bad for society. We need to evolve. We're not doing enough to protect animals.

A big AMEN to that.

Kim Mosiman is executive director of Sound Equine Options which takes in and finds homes for about 100 horses each year. "When I got him, he was a lot worse than I anticipated" Ms. Mosiman stated. Justice, who she fondly describes as "like a grumpy old man," has gained weight and become more social. On a sun-soaked afternoon at the dusty farm in Estacada, Justice nibbled grass alongside a retired racehorse named, Flick, and used his nose to nudge the notebook of a visiting reporter. Ms. Moisiman said, "I'm trying to find someone who wants to adopt him. If this columnist had any farmland, Justice would move in with me..

Media, please take note. Perhaps do follow up stories. For any of you who wish to talk to the Animal Legal Defense Fund attorneys, please contact me and the information will be sent to you pronto. I can also put you in touch with attorneys who will share their briefs in this case.

Attorneys – please consider becoming an animal advocate. This should spread out over the entire nation.