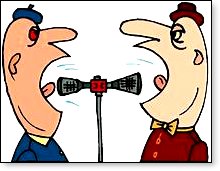 Behind The Iron Curtain, a cesspool of unhappiness, stress, control along with uncertainty was a part of everyday life. This was the first place I learned of the sin of using unauthorized words offensive to the dictatorship. Words, if spoken could land one in prison for a session of torture at the pleasure of the military which, depending on the mood of the torturer, could result in the death of the victim.

If that happened, the guards would pick up the bruised and broken body, take it out, throw it in the back of a pickup truck, drive to the victim's home, throw the corpse on the porch, knock loudly on the front door, walk back to the truck and drive away, leaving the family to open the door and deal with the tragedy of their loved one.

This is why I have vigorously fought against the Democrat Communist takeover of the United States which has been in preparation since the beginning of our country. The Democrat and the Communist Party are one and the same. Make no mistake about it. And they want total control over each and every one of us.

Whenever a military or communist leader was to speak, all citizens were REQUIRED to attend. There were thugs in that audience or standing on the sides who watched to see who the first person would be to stop applauding at the end of the speech. That person was grabbed up and taken to the jail for a beating.

The stress there is so great that I saw a distressed drunk man riding a bicycle weaving toward his destination. The pressure is too intense to ever be able to relax wherever you were, including your own home.

The Democrat and Communist Party have pushed for the full visibility of the LGBTQ community. Back in the very early days, the people saw the occasional one that would be obvious, as "a queer" or a "pervert." They pretty much stayed to themselves. There really were no problems, but a plan had already been put in place and was being implemented piece by piece.

Gradually, these people came more and more into view. Liberace with his spangles, flamboyance, showmanship and odd mannerisms became a television star. A movie was made, with him playing the lead role.The newspapers began quoting him and making certain that homosexuals were made a natural part of life.

The purpose of these preparations was to form an attack on marriage, family, and church. It worked. It also tore down the dignity of being a human being.

The LGBTQ community began inventing words to correspond with their perceived sex....now get that...this resulted in 51 different sexual identifications. Now the squeeze begins. We have all been ordered to call each person we encounter with their proper pronoun. Remember, there are 51 to choose from. It has now advanced to the point that if anyone, yes anyone, who calls them by the wrong pronoun will be arrested and fined around $140,000.

Talk about a method to control people. It is exactly this type of craziness that the Communist Party utilizes to put fear into people and make them do exactly what they demand that they do.

Now they have really tightened the screw....as they virtually screw us to the LGBTQ agenda. Words have now come under attack. They now have managed to get rid of husband and wife, man and fiance, man and his betrothed. None of that in this new world.

The latest is in various news sources. They now have a picture section with a famous name's beautiful mansion or run down house, with this teaser, "See where (celebrity) and his (her) PARTNER now lives. One can find tons of such stories in the tabloids today. Again, not man and wife but PARTNER.

PARTNER IS AN ORIGINAL DEFINITIVE WORD UTILIZED BY THE LGBTQ. This is how they described their boytoy, girl-toy or whatever else turns them on. So by pushing that word PARTNER to describe a man and woman couple, brings us all, unsuspecting, into the world of LGBTQ as we are required to use their language.

How how did these 'unique' beings gain such control over all of us? By doing so consistently without letup while carefully publicizing all of their activities.

This is to weaken people (which makes them easier to manipulate)...weakening families which is the real strength of our country and the church (what they have managed to do with the church is sickening) and our country itself which puts it on the auction block for the Communist Democrats to squabble over.

And don't forget this. They are working in the schools to erase our history so that we have no idea who we really are and what we have accomplished. This makes us all more vulnerable to manipulation.

What to do. Those with writing abilities, write about all of this, write letters to the editor on the news they publish, get back to church on a regular basis and pastors, 'man your pulpits.'

Final Word. Please be kind to all living creatures, both two legged and four legged. Never contribute to the suffering of any animal. Be good to all. All creatures were created by God and it is an offense to God to harm any of them. We were told in the Bible to "tend the garden (garden of Eden and all that is in it.) Let's get back to being genuine human beings. All creatures feel the same things we feel, emotionally and physically. Never forget that.

Rev. Austin Miles' Popular Book, God and Animals – What the Bible Says About Animals and Heaven