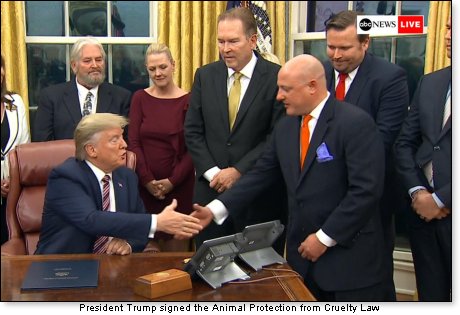 Richard Firth is a faithful reader who spots and sends me news items I may have overlooked. The one received by him last night at midnight made me cheer out loud. I would have rushed out into the street and danced a jig but it is difficult to dance a good jig with a broken leg. While it is healing, doctors tell me that it will take a few more weeks before I can dance that jig. Eventually it will be coming to a neighborhood near you.

Both Congress and The President of the United States agreed that cruelty is abhorrent, illegal. And I might add, especially for innocent animals. This writer has been pushing for this kind of animal protection for years. FINALLY! This Presidential action has brought one of the greatest victories for animals, and, animal lovers, this country has ever wrought.

Animal Wellness Action-newsletter by The Political Animal states that this was also said at the signing:" It's Their Capacity to Suffer, and their Value to us, that Warrants Proscriptions Against Abuse." Animals not only have the capacity to suffer, since they have the same nervous system as us, and not only feel pain, but have anxieties, fear, dread, anticipation, and yes, even love like us. This should never be forgotten.

The White House Ceremony yesterday,, according to writer Wayne Pacelle, began as President Trump honored Conan, the elite military dog who chased down the world's most wanted terrorist, Abu Bakr al-Baghdadi, in his fortified Syrian hide-away. Just hours later, The President signed into law the Preventing Animal Cruelty and Torture (PACT) Act, which establishes, for the first time, a national anti-cruelty statute.

Mr. Pacelle reminded us that animals don't need to exhibit this kind of high-risk heroism to warrant our protective instincts. But the actions of Conan are a vivid reminder that animals give so much to us, even risking their lives for our national security. Dogs and other animals serve in the military, but they also are on the front lines with our law enforcement officers in our communities every day. They assist individuals with physical challenges and they provide love and companionship to tens of millions of us. They are part of our social network, cherished members of our families, and wellsprings of joy for us with their antics, their pleadings, and their affections. There's so much there. Look deeply into a dog's eyes where you will see their very soul. Look even closer and you will see your own.

The very least we can do for the whole lot of them is shield them from the aggressions of malicious people. Dogs, cats, rabbits, birds, and so many other animals are sensate. They have lives that matter to them. Their capacity to suffer is all that's needed to warrant our empathy and our action.

Mr. Pacelle attracted the support first of dozens and then ultimately hundreds of their colleagues. So many of them had heard from tens of thousands of caring people like you who wrote and called and demanded that the PACT Act be passed. As Senator Toomey told him at one bleak moment when a few stonewalling lawmakers had won the day, it would be just a matter of time before the battle turned in our favor. This part of the victory is due to readers who took serious the various columns calling for such a law and wrote their representatives. THANK YOU readers who took part in making this victory for animals happen. Yesterday was that day.

It was the best midnight this writer ever experienced when that news came in. Be kind to all animals, including two legged ones. If any of you see anyone mistreating an animal, keep an eye on them and call the police. This writer managed to get a law passed that makes it a felony to deliberately hurt an animal and the low life who does this will spend a solid year in jail after being arrested. And we have even established animal courts where lawyers and judges are especially trained in animal welfare and cases of any animal abuse come before them. This resulted in a horse sueing its owner for cruel treatment and with the special court, and the horse won.

Today President Trump – with encouragement from Lara Trump, his daughter-in-law and animal advocate Blair Brandt – put a capstone on our nation's legal framework against animal cruelty. Another stone will be added when our animal fighting law takes full effect in about three weeks. That law, with its implementation delay a year from its 2018 passage, would apply all federal prohibitions against staged animal fighting to every part of the United States, including the territories. There's no longer ambiguity about its reach and effect because a U.S. District Court in Puerto Rico just affirmed that the law does in fact ban cockfighting in all five U.S. territories, none of which ban cockfighting under their territorial laws.

Criminalizing the most gratuitous forms of abuse is an antecedent to ending more carefully defended forms of cruelty. No nation can hope to confront factory farming, animal testing, trophy hunting, the fur trade, and other severe forms of institutional animal exploitation – with their phalanx of enthusiasts, business owners, and state apologists – without first taking care of the cruelty in our backyards. When that kind of cruelty rightly earns our broad social disapproval, it's not a major leap to call out cruelty in its other hiding places, including in the realms of sport, agriculture, science, or fashion.

Animal Wellness Action is a Washington, D.C.-based 501(c)(4) organization with a mission of helping animals by promoting legal standards forbidding cruelty. We champion causes that alleviate the suffering of companion animals, farm animals, and wildlife. We advocate for policies to stop dogfighting and cockfighting and other forms of malicious cruelty and to confront factory farming and other systemic forms of animal exploitation. To prevent cruelty, we promote enacting good public policies and we work to enforce those policies. To enact good laws, we must elect good lawmakers, and that's why we remind voters which candidates care about our issues and which ones don't. We believe helping animals helps us all.