Rev. Austin Miles
What really is behind impeachment insanity! 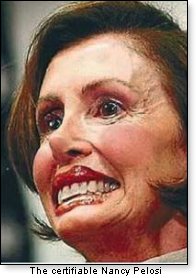 The vicious attacks on President Donald Trump, including the current impeachment insanity orchestrated by the Wicked Witch of the West, Nancy Pelosi, has a far greater purpose than simply 'getting rid' of a president they don't like. And anyone awake can see that the intense hatred of the best president the U..S. has ever had, is not really directed at President Trump. Even so, it is an extremely political maneuver to bring America to her knees. You will never guess what is really behind this.

In this case, it is the usage of something magicians know well, MISDIRECTION. The magician has you looking at the hand that he himself is looking at which draws the audience to watch THAT hand, while the other hand is doing what nobody sees in order to make the trick, or deception, work.

While it appears that this public rebellion is against a president who is not doing his job, the real target is....us...the 63 million people who voted in President Trump. And why against us? Fasten your seat belts. It is because they know that we the people, will not allow George Soros and the Communist Party to take over America and put us under Communist dictatorship. This is extremely important to them since America is the only country standing in the way of the desired One World Communist Order where the world director will be the aforementioned George Soros. So the stakes of this hatred, violence, and anti-God mentality are high.

To attempt to impeach this president is the nuttiest thing this writer has ever witnessed. And this insanity is led by Nancy Pelosi, who we believe is certifiable. This impeachment idea was hatched the moment this president was sworn in. Every effort has been made by the Democrat Communists to sabotage everything President Trump has worked to correct, including the protection of our borders.

Remember again: This political war is NOT against President Trump who has accomplished more for America and her people in his first three years than any other president during their full terms. This war is against every patriotic conservative and Christian who will stand against the Communist Party USA and prevent them from taking our country into their captivity. That is their intention with George Soros' money behind them.

Citizens, we must not allow this to happen. Flood the D.C. phone lines stating that this impeachment effort is a scam, a misdirection, a totally dishonest effort. Write firm letters to the editors of the newspapers in your areas. We only have a couple of days to do this. We can no longer simply sit and observe. We must be active in preserving our country and the foundations of America as put in place by our founding fathers. And do not be afraid for your lives by doing this. We will all die anyway if the Soros plan is successful.

So we have nothing to lose except if we are cowards. Then we simply obediently wait for that moment when we are killed....or....we can stand firmly for our families and our country, resist, and it is greatly possible we will prevail. This writer would rather die fighting than to simply die doing nothing by letting them decide.

PATRIOTS – HEAR THESE WORDS! AND STAND YOUR GROUND!