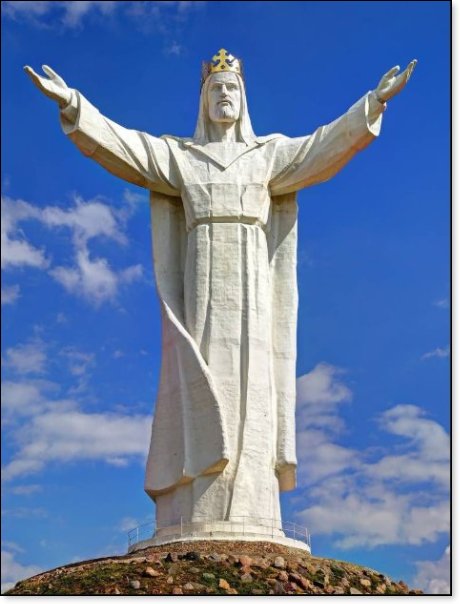 Democrat Communists who are attempting a coup d'etat against the United States have boldly announced that their next assignment is to tear down all statues of Jesus, both in and out of the churches, since Jesus is depicted as a "white European" (?) which, say they, is a form of "white supremacy." This means they plan to enter the churches to cause this unheard of havoc and destruction of images of our Lord and Savior Jesus Christ, which most definitely will not go well for the hoodlums.

This writer has been warning the world of this for years, knowing full well the plans of the Communists, but it seems nobody really paid attention. I have constantly referred to the Communist Manifesto that instructs their followers to delete the history of a targeted nation. This is why historical statues are being torn down and destroyed. A targeted country must become illiterate regarding its history. They quite well understand that being ignorant of one's history weakens all.

The same manifesto says all churches must come down. Not only in America, but around the world, since religion "is the opiate of the people" and must be torn down.

Notice the number of attacks on Christian churches and the burning of sacred literature taking place all over the world, but especially in America, the only country standing in the way of the One World Communist Order, since there are thousands of churches in America, where the majority of the population is Christian. A Christian mind cannot be enslaved. I refer, however, to DEVOTED Christian minds.

"Black Lives Matter" activist Shaun King, according to Life News, also instructs followers to smash stained glass windows in churches that depict Jesus as a "white European," which he claimed is a form of "white supremacy."

Shaun King went on to say, "All murals and stained windows of white Jesus and his European mother and their white friends should also come down."

This writer did learn something valuable through this insanity. I did not know that Jesus was white!

It gets even nuttier. Vermont Senator Bernie Sanders, a Socialist who tried to be President, said this about the Christ statues and stained glass windows: "They are a form of white supremacy. Always have been." We learn something new every day.

So the day is near when the nutheads will enter the churches to tear down the statues of Jesus and smash the stained glass windows.

Perhaps it would be prudent to advise all funeral homes to remain open at the time this is to take place.

Meanwhile, let us dust off our muskets.

This story was originally written by Peter Hasson who writes for Daily Caller.