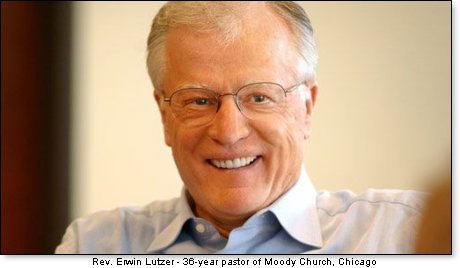 This is long overdue, almost 30 years overdue. I was once very rude to the pastor of Moody Church in Chicago during his radio program on WGN where I was invited to be his guest. I wasn't simply rude but downright vicious. I am so ashamed in even writing this as I reflect on that night.

He was very kind and gracious to me, but I tore into him like he was the lowest of the low. Yet, he stayed loving and polite to me throughout. He did once say, "Ouch!" at one verbal stab I threw at him. And why was I so hostile toward him? Because he was a Christian Minister and pastor of a church. Considering what I was going through, the entire church was evil. I am not mentioning the denomination of the church that tried to destroy my very life.

I had been an evangelist for this national church. I had come out of a lucrative show business career when I felt God calling me into the ministry. Being highly publicized, this church organization bent over backwards to enlist me into their ranks.

At the official meeting with that denomination I was asked why I wanted to be a minister. I quickly replied that God had called me and I could not even think of doing anything but preaching the Gospel. "That's the answer we were hoping to hear," the head honcho of that denomination pontificated.

After passing an extensive written exam I was cleared for ordination, which took place later at a church in New York. That was one of the happiest events of my life. Because I had been in show business for so many years, I also was given the office of Chaplain to Show Business.

I began traveling to churches in every state, province of Canada, as well as England, France and Norway, for week long evangelistic meetings. Because of the publicity I received, all churches were packed wherever I spoke. I was happy to be in an occupation where people were "humble," did not have big heads or egomania like it was in show business where everyone wanted to be a star. So I Thought.

What's more, I was the happiest I had ever been. Yes, I was born to be a minister, indeed my first service was when I was 10 years of age and had "church" at my home for my neighborhood friends.

Then I began to realize that show business was not the only occupation where out of control egos were in full play along with oversized heads. The church leaders were far worse! The jealousies and rivalries made people in the entertainment industry appear humble. This was my first shock.

The ministry God called me to was not only biblical preaching, but visible miracles took place regularly. Many healings took place at every service, and at times a doctor could come to the church to testify that a member of the church who received the healing was his patient and he had to say that what took place was indeed a miracle.

At one church in Tennessee, the pastor's young daughter, who was born blind, received her sight. Talk about excitement! Radio programs the next morning, that I heard in my car, went on and on about the great miracle that had taken place in that town.

Then the jealousies began. At one church in New Jersey, where I spent a week, there were not only many miracles, but attendance, that was not normally great, grew at that church. One week later, the worship leader whom I had become friends with called me to say; "You won't believe this. Pastor (Name withheld) got up today (Sunday) and said to the congregation; "I find it difficult to imagine why God would bless Austin Miles's ministry like he has. My parents were missionaries to China, but He has never blessed my ministry like that. And Miles was a circus ringmaster!" he proclaimed with total disgust and a tight face.

After that church organization managed to get all the money I had saved during my show business career, and it was very substantial, they declared that I had been dismissed from that church organization. Even though I did everything right and lived what I preached, the rumors got worse and worse. What is more, I stayed in the parsonage with the pastor's family or in an 'evangelists apartment' in the church, meaning that I was within their sight night and day. They not only got me cancelled out of the churches in their denomination, indeed I was blackballed. They also contacted other denominations that wanted me to preach for them to tell them not to have me that I was evil.

The false rumors were so bad that one evening with tears in my eyes, I asked my wife if one could die from slander, it was that bad. One young woman tried to convince a prominent couple in the church where I was preaching in Detroit, that I had offended her and seduced her all day. The couple said that this had to be a miracle of its own since I had been with THEM, the entire day that this sick woman claimed I had taken advantage of her.

I became angry. It was so bad that I began carrying a small pistol with me. On Sundays when we passed by a church I would say to my wife, "There they are, all gathered together to get their hate lessons." It was so bad that I actually considered firing my pistol at the stained glass windows of the church as we drove by. This was the worst time in my life. My dreams of being a minister were shattered, not through any conduct of mine. But by vicious jealous pastors.

I received a hate missile every day for 35 years from someone in that church. They would not let up. So when I was ushered into the WGN radio studio to be interviewed by Erwin Lutzer, I was the one who was hostile due to the fact that he was part of the church world.

I have wanted to apologize to him and beg his forgiveness. But this was unnecessary. Pastor Erwin had already forgiven me long ago. Let this be known to everyone, I am so sorry about my conduct toward Pastor Lutzer. He is the real deal. And remained totally polite to me when I was at my very worst. I had to ask God's forgiveness for being so hostile to one of His choice ministers. And let me say it again: I am so sorry Pastor Erwin. Please understand that this was not me who was in your studio, but one who had been virtually destroyed by the church and Christians. But I was absolutely wrong, and totally recognize that unfortunate fact.

Since those days I started a program to train chaplains and was on duty at all times to handle any crisis situation that came up in any life. And there were many. I did heavy counseling and did over a thousand funerals.

I think you will get a laugh out of this one. There was a Presbyterian Church in Harrison, New York with Pastor Don Theobald who was having me do guest preaching from time to time. The pastor himself received the Baptism in the Holy Spirit after watching a woman in his congregation, whose hands were crippled from severe arthritis lift her gnarled hands in the air as I prayed, and visibly her fingers all began to stretch out. The arthritis was gone. I was booked for another spot in that church.

"This is Reverend Winston Schmock, pastor of First Assembly of God Church in White Plains."

"What can I do for you, Reverend Schmuck?"

"The name's SCHMOCK not Schmuck."

"I beg your pardon."

"What I called about is that I heard you have Austin Miles coming to your church."

"You don't want him in your church."

"Because there are bad things about him."

"Oh? What kind of bad things?"

"Well, you will have to be more specific about what's wrong with him."

"Well, nothing specific. But I'm just telling you that you don't want want him in your church."

and my church. But thank you for calling me....Reverend...SCHMUCK."

Reverend Theobald hung up the phone with a satisfied grin on his face.

All this led up to my bad behavior in the presence of Rev. Erwin Lutzer. I am so sorry for my conduct that evening so long ago, but hopefully this explanation will bring some understanding about my behavior that night. Again, I deeply apologize to you Rev. Lutzer. If I lived in or near Chicago, I would be attending your church. You are a minister/pastor that all servants of God should emulate.

Author's note to readers: Please always be kind to animals. They, too, have feelings.