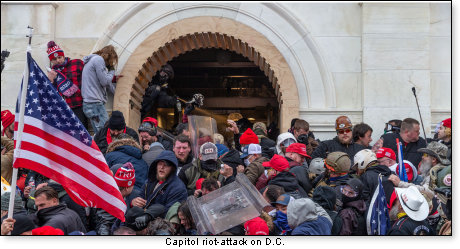 The lying newspapers today are only useful if one has a caged bird. I am sick and tired of reading that Trump supporters were responsible for the Washington, D.C. riots. They were NOT. Trump had a group of people who were sincere supporters of him who were going to walk quietly down a street in D.C. to demonstrate that he has many supporters. This is FACT.

Antifa along with BLM with their ears on the tracks mined the info that these supporters were coming to D.C. George Soros quickly paid for buses to take them to the Capitol to intermingle with Trump supporters. They are the ones who came, with weapons, to crash the U.S. Capitol. And they were all paid to do so.

Let's not forget that since the counterfeit media conveniently placed the blame on Trump supporters for the havoc in D.C., we have another demonstration of a lying media. This event alone makes it all apparent. Only alternative news sites, radio talk shows, and some TV give accurate information.

The leftists took over what was to be a simple parade showing support for the greatest President the U.S. has ever had, with many senior citizens in the group. None of them were armed nor did any of them even contemplate violence.

This writer was once a Democrat and yes, there WAS a Democrat President who was terrific. That was John F. Kennedy, my cousin. That was back before the Democrats went socialist-communist.

The armed ones at this attack on America were Soros-paid agitators. Yet the lying newspapers hammered that Trump supporters had breached the U.S. Capitol. In absolutely every story printed and put on TV, they made a point of calling the destruction, injury, and death that occurred a rampage "by Trump supporters." That was the verbiage printed every time a story about the D.C. riots was printed. This is total dishonesty. Any person or party who is dishonest should never be considered an equal or even given respect.

So where CAN one find honest news? The internet is the first place to look. Yes there are some who misuse the internet, but check out the columnists on various news sites and you will be accurately filled in with what is actually happening in society. My own website, www.revaustinmiles.com, has 7 of the greatest columnists in the world, one each day in the week. One of those first-class writers is Kelleigh Nelson, who every writer looks up to. When she does a story, her research is totally amazing. After reading any of her columns, you know that you not only had truthful reporting of the news, but you will learn all details of that which she is writing about.

The public has learned that this website, www.revaustinmiles.com, is one place where you can learn exactly what is going on politically and socially. And for that reason, this website has over eight and a half million readers daily. And the number continues to climb every day.

Readers, anytime you read this residue of a bull put out by newspapers that you know is false, call or send an email to that paper and tell them what they are...provocateurs and a disgrace to journalism.