Rev. Austin Miles
The Biden disaster that is destroying America!! 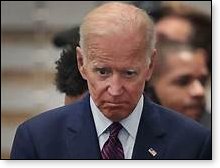 BOULDER, COLORADO 3/24/21 – Today was another Joe Biden Day. A mass shooting in Colorado killed 10 Americans. The leftist run newspapers failed to inform us that the murderous shooter is a Muslim. Why did the press fail to tell us that fact? If one remembers, President Donald Trump closed our borders to Muslims and it was with good reason. Muslim after Muslim came here and murdered people in the shadow of 9/11. President Trump, for our safety, closed America to them. And there were howls of protest over this. "Un-American" some chirped. So another Muslim settled in this country and today, 10 more Americans are dead.

Let me add that Muslims can be charming and generous people. And they can be fun. It is tragic that their minds have been hijacked and perverted by an infectious doctrine that they all bought into which redirected their lives and thinking through a distorted pathway that led them to violence as well as self-destruction.

The moment the shooting was reported, this writer knew without peeking that Faux President Joe Biden would jump on this and use this to force the stripping of all firearms from all citizens. We can't help but wonder if a Biden person did the shooting to make this point. The government has done worse things, indeed the school yard shooting in Stockton, California, was exactly that, a staged disaster to change gun ownership laws. It did not work then but things are changing.

And this writer knows perfectly well that, due to this "emergency," Biden will skip going through Congress to get this bill on the books, using instead, his "executive order" power (again) for which he has already pushed through 42, yes 42 Executive Orders, this one to strip America of all means to defend themselves and be a free country. And today Biden hinted to his staff that he would use Executive Order to seize the protective firearms from the homes of every American.

One of the first things Biden did was to open the borders, inviting all immigrants to come through promising housing, education, and medical (along with free Democrat registration) And they have been coming by the thousands. The borders had finally been put in proper order when Trump was our president and we had no problems. Plus there were good relations between America and Mexico. Not so much now.

Biden stated publicly that he was putting $80 million of our tax dollars aside in order to place these immigrants in hotel rooms. How in the Hell can this happen when we have thousands of American homeless people on the streets, which includes VETERANS. Yet they can give out our tax money to illegal immigrants with no skills, who want to come into this country for the perks, not to assist it, but to take whatever they want and need from it. Plus this strains our resources.

The change to our country will be more rapid than expected. Gas is expected to go up to $5.00 a gallon and no doubt higher. Biden can put all the taxes, which go to him, on each gallon we purchase and there is nothing we can do about it.

Notice how rapidly our country is deteriorating with Biden at the helm. What is worse, Biden seems to have mental problems. And we watched him trying to go up the steps to his airplane and he fell on the steps three times. This is the first time I've ever seen anyone fall UP the steps.

It is time and proper TO IMPEACH BIDEN AND KAMALA HARIS. If this is not done soon, it is all over. Indeed, we should have another election since the last one was rigged and this has been proven. Donald Trump belongs back in the Oval Office. Let's use every resource to get him back there.

Either this, or, "Welcome to the American Branch of Venezuela."