Jerry Newcombe
Is Christianity to blame for everything bad?

April 29, 2016
Earlier this month in Philadelphia, there was the 17th annual "White Privilege Conference," which a friend describes as a "liberal confab devoted to self-abnegation."

One of the speakers, Paul Kivel, blamed Christianity for everything bad in the world. Kivel is the co-founder of the Oakland Men's Project and founder of "the Challenging Christian Hegemony Project."

So everything bad comes from Christianity?

Was Kivel born in a hospital or treated in one? Kivel can thank Jesus Christ who inspired His followers to create such an institution. St. Basil of Caesarea who lived in the 4th century is credited with creating the first hospital in the history of the world.

Speaking of St. Francis, he is the name sake of the city across the bridge from Oakland, San Francisco. Father Juniper Serro of the 18th century created a network of 21 Catholic missions – essentially a one-day horseback ride away from each other – from San Diego to Sonoma, essentially establishing California's cities.

Did Kivel go to school? Education for the elite has always existed. Education for the masses was a gift of Christianity to the world. This is especially true after the Reformation. The Reformers knew for their message to stick, people would have to read the Bible for themselves.

The first law for education in America was the "Old Deluder Satan Act" in Boston of 1642. The goal was to teach boys and girls how to read for themselves so that they could read the Bible – thus, thwarting the attempts of that "old deluder Satan," who works hard to keep people from reading God's Word. He is quite effective in our times, but not primarily through illiteracy.

Did Kivel go to college? Again, he can thank the Christian church for that. Scholars say the university was created by the church during the Middle Ages around 1200, with the University of Paris being the prototype. One of the main goals was to reconcile Christian theology with the newly rediscovered teachings of Aristotle.

Most of the greatest universities the world over were founded by Christians for Christian purposes...Oxford, Cambridge, Harvard, Yale, Dartmouth, Princeton, and so on.

Did Kivel use a microphone to blast the Christian church? Did he have a lightbulb by which he could see his speech? Christianity played a major role in the development of modern science. While the ancient Greeks helped pave the way, modern science was born in the late Middle Ages by Christian experimenters who were, in the words of Johannes Kepler, "thinking God's thoughts after Him." They believed a rational God had created a rational universe, and it was their role, said Kepler, as "priests of the most high God" to discover those laws.

As D. James Kennedy and I point out in our book, What If Jesus Had Never Been Born?, the founders of all the major branches of science were professed believers in Jesus.

Presumably, a conference dumping on "white privilege" might pay homage to Dr. Martin Luther King, Jr., the greatest of the civil rights champions.

King was the president of the "Southern Christian Leadership Conference." The church was the key launching pad for the whole civil rights movement. King was a Baptist minister.

Who is out there feeding many of the down and out of our society? The Christian church through one agency or another. They are showing the love of Jesus in action.

Kivel wants a world without Christian influence. Humanity has done that before. It was called the Soviet Union. It was called Pol Pot's Cambodia. They brought hell on earth. To paraphrase C.S. Lewis, if Jesus had never come, it would be "always winter, but never Christmas." 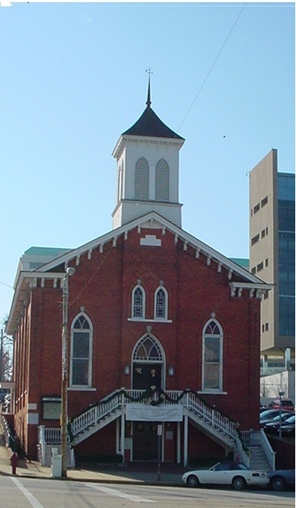 Dexter Avenue Baptist Church in Montgomery, Alabama, where Rev. Martin Luther King, Jr. pastored in the 1950s and a key birth place to the civil rights movement. For example, the peaceful bus boycott to reject unjust Jim Crow laws was born in this church. [Photo by Jerry Newcombe]