Jerry Newcombe
Campus commandment: Thou shalt not be offensive

May 1, 2019
Question: If you believe in the traditional Judeo-Christian sex ethic – that no one should have sex apart from the bonds of holy matrimony (between a man and a woman) – should you be disqualified from making a presentation at a college campus?

Apparently, some key student leaders at Cornell University think so. Cornell is the only Ivy League school that was not explicitly founded as a Christian school.

Who would have agreed with the traditional Judeo-Christian sex ethic that intimacy is to be reserved for marriage? And on it goes.

In fact, most Americans subscribed, at least ostensibly, to the Christian view of sex until about a generation or so ago. The sexual revolution upended everything and has brought in its wake ravaging sexually-transmitted diseases, countless divorces and broken families, subsequent poverty, and untold misery.

But now, if you hold those traditional views and have voiced them at some time, you could possibly be censored from speaking at a public event. 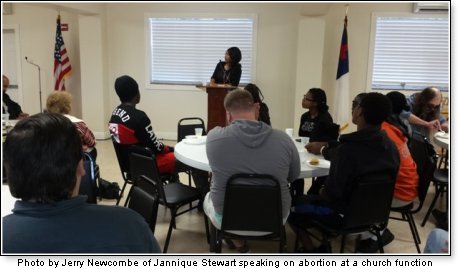 That's what happened to a friend of mine, Jannique Stewart. Jannique, an African-American woman who grew up in Europe, speaks at colleges, high schools, and churches all over the country and even other countries – providing a traditional view on the pro-life issue, on abstinence, and on sex.

At our church in south Florida, we have had Jannique speak at a couple of our "Salt and Light" events. She's always been very positive, factually based, and upbeat.

Jannique has her own organization, loveprotects.com. And recently, she has been doing a lot of speaking for Scott Klusendorf's Life Training Institute, an organization that tries to equip people to defend the pro-life perspective using science and philosophy. She notes: "We're able to debunk a lot of the common myths and misconceptions" surrounding abortion.

An executive board member of Cornell Political Union contacted the Life Training Institute in January of this year to inquire about Jannique's availability to speak at one of their meetings. The topic was going to be pro-life versus pro-abortion. They ended up inviting her, securing the date, working out the details – but then later they disinvited her. They did that when they found out two things about her.

She told me on my radio show the views that got her barred from speaking at Cornell: "One, that sex should be reserved for marriage, and two, that I believe that marriage is defined by God, our Creator, as the union of one man and one woman." Well, I believe that too. So do millions of Americans.

By this criterion, Barrack Obama could have been disinvited in 2011 because he publicly professed to believe marriage was between one man and one woman. In fact, former Supreme Court Justice Kennedy, who wrote the pro same-sex marriage decision in 2015, said that belief in heterosexual marriage has been widely held around the planet for "millennia." So her views on this are not unique to Jannique.

Jannique told me of her reaction to being disinvited: "That's a form of viewpoint discrimination, and that's wrong of them to do that – especially at a university campus, which is supposed to be a bastion of higher learning where we're supposed to have a free exchange of ideas and then be able to debate those ideas."

She says, "They felt that the students would not be able to listen to my prolife speech because they would be so focused on my views. And I thought, 'Now, that really is insulting to their intellect because what they're saying is that [their fellow] students at this Ivy League school cannot possibly listen, simply because of my views on pre-marital sex and marriage."

What disturbed Jannique the most was how they viewed her views as being on the same level as racist views. She was told, "having me on campus with the ideas that I hold is very similar to having a racist on campus with pro-slavery and pro-Holocaust views. The board felt that way or the board felt the students would perceive me in that manner, and that is offensive. It's not only offensive – it's flat out wrong to try and compare the Biblical standard (and that which is natural marriage) as bigoted."

When people like Jannique get censored on our college campuses, the students only get exposed to politically correct ideas. And truths that have stood the test of time – for "millennia" – get silenced.

But there is no constitutional right to not be offended.