October 29, 2011
Thus far, I've made no attempts at maintaining any sort of unbiased approach in my comments vis-à-vis the Republican field of presidential hopefuls. I have declared myself for Herman Cain. With the possible exception of Newt Gingrich, Herman Cain in my opinion, is the smartest person vying for the nations highest office on either side of the political spectrum, by a mile! 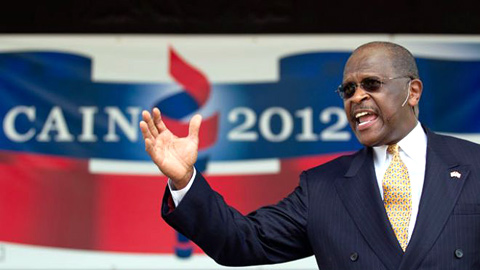 I would like to see Herman Cain as president and Newt Gingrich as his Chief of Staff, in an advisory role, where Mr. Gingrich's impressive breadth of political savvy could be best employed. With Congressman Marco Rubio (R-FL) installed as vice president and waiting in the wings, the right would have a secure hold on the Executive branch for some time to come.

Your opinion may vary and that's swell. But what I find distressing is the right's inability to learn. I am being charitable in offering that last statement because I fear the reality may be far worse than a simple conservative learning disorder — perhaps even sinister.

How else to explain the right's propensity for self-immolation? No...wait...let's make that the establishment right.

The grass roots right just gets their hopes crushed as the establish elephant, gorging on the peanuts they hand him, grows and grows until the grass roots are pressed and suffocated against the walls of the conservative leadership's narrow, little minds.

This is the second presidential election cycle where this behavior can be observed. The establishment right wing leadership works hand-in-glove with the ultra-liberal left wing media machine. Their mission? Destroy the most galvanizing conservative candidates.

In the last cycle, the establishment left had their money on Hillary Clinton and the leftist grass roots panted for Barack Obama. By establishment right wing standards neither of these candidates would have made the cut. If the left had followed the right's modus operandi, the Democrat candidate would have likely been either Joe Biden or a pre-scandal John Edwards — the leftist doppelgängers of the doddering John McCain and the affable Mitt Romney.

Why Hillary Clinton, whose experience consisted of being President Clinton's First Lady and some eight years in the Senate qualified her to be president is God's own mystery to those of us with a brain. Moreover, how the far less impressive three years served in the Senate by Mr. Obama made him a practical choice to hold the highest office in the land is an even greater conundrum. Yet here we are.

The left didn't stop to quibble over who is smarter than who, or which person would actually make a good president — Democrats just wanted a win. The liberal establishment knew that the emotionally charged, reactionary leftist grass roots wanted Mrs. Clinton or Mr. Obama. Thus, they threw their weight behind those two choices.

Meanwhile the right spent their time convincing the right wing grass roots the candidates they were most excited about could not defeat McCain and that McCain was the only person who, in the general election, could ever hope to beat Clinton or Obama. And again, here we are.

The tragedy is that the popular candidates the establishment right and conservative media aided the left in tearing down — like Mike Huckabee — would not have been settling. Mr. Huckabee was a proven commodity and would have been infinitely more preferable to Mr. Obama.

So while the left stood behind questionable but galvanizing candidates, chanting "yes we can" with blind enthusiasm, the right discarded capable popular candidates in favor of the feckless John McCain with a refrain akin to "we could have, but we chose not to."

The establishment right told the grass roots, "Huck may be sexy, but McCain is old and we are smarter than you are."

We are seeing the same old tableau erected again in this election cycle. Herman Cain and to a lesser extent Rick Perry offer actual solutions. Noted economic wonk, Paul Ryan on Cain's 999 Plan: "We need more bold ideas like this because it is specific and credible," Though Ryan declared himself, "...more of a flat-tax kind of a guy." Which is much like the plan offered by governor Perry. Nevertheless the establishment continues to tout Mitt Romney who hasn't added anything to the debate in the form of tangible self-originating ideas.

In an article earlier this year, I put forward that we on the right ought not offer hit pieces on our candidates. I don't intend for this article to be construed as a hit piece on Mitt Romney, but I find this whole process vexing.

We hear the pundits affirming the notion that the 2012 elections will be about the economy. They also rightly insist Mr. Obama's health care plan constitutes a dire threat to the economic health and well being of our republic. They say this while promoting a candidate who the moment he begins an attack on the president's health care debacle, the same Mr. Romney will be hoisted with his own petard. This tendency speaks to some self-destructive tendency within the right.

The establishment right never misses an opportunity to tell us how great Mr. Cain or Rick Perry are just before assuring us they cannot possibly win the nomination and they certainly can't beat President Obama. Quick to point out the polls showing Cain beating Romney are irrelevant while maintaining the polls showing Obama beating Cain or Perry are holy writ.

Every chance Bill O'Reilly gets he assures his viewers that Cain, while capable, can't hope to win the nomination and that Romney is inevitable. The same is heard over and over, repeated by establishment right wing voices all over the media. You didn't see this sort of behavior marking the rise of Barack Obama on the left. Even when an article is favorable to Mr. Cain it is not without the "can't win" addendum.

Case in point, I received via email this very morning "The awful sin of Herman Cain," the latest article by Wesley Pruden, editor emeritus of The Washington Times. Wherein Mr. Pruden laments the unjust treatment Mr. Cain suffers from the left for having the temerity to be a Black conservative, he writes:

The toxic reaction to Herman Cain's hearty welcome to Republican and conservative ranks, his spectacular rise in the polling of Republican voters, is a grim preview of what lies ahead. The liberals ("progressives," as they call themselves this year) are not actually frightened by the prospect of President Cain; they recognize, given the givens, the high improbability of that happening. What irks, galls, frustrates and infuriates the east coast lib snobs is that the Republican embrace of the pizza man destroys the story line they want to reprise from 2008, that only bigots oppose President Obama.

Mr. Pruden's description of liberal pathology is spot on, but why the need to foster the notion of the impossibility of Mr. Cain succeeding in obtaining the nomination or winning the presidency? In doing so, Mr. Pruden perpetuates those ephemeral "givens" invoked in his article.

Two years ago I coined an eponymous law describing the most popular leftist narrative fomented by the "progressives."

I now offer a new law, which I self-indulgently proffer as an explanation of the thinking process of the modern so-called conservative intelligentsia.

The Cain Praxis: Any truly conservative candidate popular with the grass roots, regardless of competency, is deemed unelectable by conservative leadership in favor of the most generic alternative.

This is not a racial principle, it could just as easily be called the "Huckabee Barb," Cain Praxis just sounds better — I wish it weren't so true.

"Jesus said unto him, If thou canst believe, all things are possible to him that believeth." Mark 9:23

The American left, populated by people less likely to even believe in the God of the Holy Bible, have a firmer grasp of this Scriptural precept given us by Christ the Savior. I hope you join me in praying: "Dear Lord we do believe; help us overcome our unbelief!" In Jesus' mighty name, Amen!