Tom O'Toole
"No greater love": a friend's statement for an Euteneuer victim

A few days later, when Jesus again entered Capernaum, the people heard that he had come home. So many gathered that there was no room left, not even outside the door, and he preached the word to them. Some men came, bringing to him a paralytic, carried by four of them. Since they could not get him to Jesus because of the crowd, they made an opening in the roof above Jesus and, after digging through it, lowered the mat the paralyzed man was lying on. When Jesus saw their faith, he said to the paralytic, "Son, your sins are forgiven ... I tell you, get up, take your mat and go home." — Mark 2:1-5,11

There is no greater love than this, than to lay down one's life for one's friend. — John 15:13 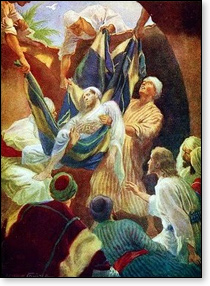 On the Feast of the Annunciation, I received from a young man, an e-mail about his long-time friend, the victim I've been writing about in this blog. Although he met her a good seven years ago (they had attended college together for a time) he had not stayed close enough to her to keep her from the abuse that she suffered at the hands of her former exorcist, Thomas Euteneuer. Still, when he found out about it, and found out she still suffered from the fact many in the public forum believed (and the diocese let them believe) Euteneuer's "self-championing, riddled-with-lies statement," he vowed to do something about it. He shares her very serious fear and worry that others, who have been or might become exposed to Euteneuer, are left vulnerable to manipulation and abuses. Since both those entrusted with her spiritual care and her doctors ordered her not to come out publicly about this (and to instead "focus on healing"), and he himself was strongly urged to not use his name at this time, he decided to set the record straight as best he could under the circumstances. "My statement may not be literature, or even coherent thought, but [it is] a heartfelt hodgepodge in service of a friend." I'd say that statement is an under-statement. It reads as follows:

I've been a friend of the victim for several years. I'm not surprised by the loyalty of many who would like to see names and faces before believing anything against a priest. I was raised to respect all priests as sons of Mary, and to never say or hear anything negative against them. As a son of Mother Church, though, if Church leadership will not lead the way, it is left to us friends and relatives to try to do something for our friend, to break a hole in the roof to get to Christ (Mark 2:4).

I am surprised at those who think that because Euteneuer made a public statement that everyone can now move on, before they make even one movement of the heart towards the victim.

A word about her. Anyone who has known my friend has been blessed by this acquaintance. You must imagine for yourself the woman from the Bible who was afflicted with hemorrhaging for twelve years, who went through all of her resources to find healing, at the hands of "experts" who only made her worse (Mark 5:26). The difference is that you must double that length of time, and appreciate what possession entails. Those who have seen a manifestation of a demonic spirit are seeing for a brief (if violent) second, what the possessed person has to live with for years on end. Worse, with the skepticism and isolation one contends with to convince or educate friends, family, "experts" and representatives of the Church that you are not imagining the situation, you grasp what a struggle this is. Then think of the hope, and level of trust and commitment a person would be brought to when meeting a friendly, smiling man, who on the surface was very Christ-like, that took us all into his confidence. But then, the horror, devastation and despair you feel when it later turned out that beneath the surface, he was anything but. And that Euteneuer personally proved quite un-Christ-like is something all must face, even at the surface level of his public statement. It is the devastating reality beneath the lines of this statement that I would like to speak of now.

Euteneuer stated that his "violations of chastity" were such that they "did not involve the sexual act." By legal definition, however, Euteneuer did engage in acts that constituted sexual intercourse; and not only sexual intercourse (which he denied), but rape. And he raped her not just once, but repeatedly over several years. Although sparing the graphic details, it is critical to clarify that his acts of assault went gravely beyond mere words, or kissing, or even touching. When justice is finally served, and this all comes to light, under the innocent sounding veneer of phrases like "violations of chastity," you will find that Euteneuer committed not just borderline but actual, definite sexual acts — literally, acts of rape — that anyone would call such. And these acts were a matter of rape, first on the grounds of her being, like a client to a therapist or a patient to a doctor, in dependency and obedience to him as her spiritual director and exorcist, and secondly, most heinously, due to the fact these acts of sexual abuse were performed immediately before, just after, and even during exorcism. And those who have witnessed demonic manifestations will testify that the victim before, during, and after, is clearly and definitively in the mental, physical, and emotional state of "duress" necessary to legally classify a sexual act against her during that period as rape.

If you have understood this, then you will begin to see not only what devastation Euteneuer caused his victim by his abuse, but how his self-championing, riddled-with-lies statement continues to add to her suffering. In fact, the statement is rife with falsehoods, including his claiming only one victim, denying his extensive financial impropriety (with several victims), and denying the possessed woman who lived in his parents' home, to name just three (all of which were testified to and verified by both dioceses and lawyers involved).

Furthermore, by remaining silent on this matter, the diocese and the bishop lend credence to his statement and add to the public perception that, far from the perpetrator he was in reality, maybe Euteneuer wasn't such a bad guy after all. Worse, even once he was finally removed from exorcism ministry, my friend has continually suffered the trauma of an unprepared diocesan response to her critically heightened state of demonic victimization. Not finding the help she needs continues to delay what she had sought to begin with and now needs more acutely than ever: freedom from possession. But for God's mercy, all this has made her healing all but impossible.

Yes, everyone involved in this matter needs your prayers, including the man who damaged my friend so gravely it fills me with both anger and tears just to think about it. But know that, if Euteneuer (or the diocesan public response) has convinced you that he is the principal victim and not her, then the devil has won.

After reading (and re-reading) this friend's statement, the scripture John 15:13 kept coming to mind. May this man stay strong in Christ when he hears and reads the negative comments about his friend (and his chivalrous stand for her) and may the victim herself realize that even in her darkest hour, her few good friends are still stronger than the many who still doubt her.