I said many, many times that one of the reasons Joe was hanging on to that position is because if he left, he'd die...I knew Joe very well, and it was a very tragic tale, his last few months...tragic that a life so well lived and someone who had made such a great contribution to sports and to our culture would have the end of his life end in such a sad way. -Rick Santorum 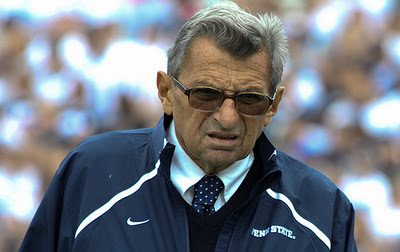 The official cause of death for the legendary Penn State coach, Joe Paterno, was complications from lung cancer, but I think former Penn State player and current ESPN broadcaster, Todd Blackledge, was more to the heart of the matter when he said "Joe Pa" "died of a broken heart." GOP presidential candidate and Penn State alum, Rick Santorum, elaborated on this theme when Paterno passed away yesterday, a date already made more than tragic as the anniversary of Roe v. Wade, the beginning of the end of our Republic.

Indeed, if anyone can sympathize with Paterno, it may be Rick. For Paterno, nearly six decades of legendary coaching and Catholic humanitarian work were tossed out the window when Joe was fired from the school he loved more than life, not for doing anything wrong, but allegedly for not doing enough right to catch the child molester from hell, Jerry Sandusky. Few even thought to ask if "old school" Joe was ever coached on the modern methods of what to do with alleged child abuse, or why he wouldn't think his responsibility completed when he reported what he knew to school authorities, and got back to the only business he really knew; transforming young men's lives while teaching them how to play football. But Sandusky was long gone from coaching, and, needing a scapegoat, "State" fired Paterno instead. Only in America do legacies change so quickly...and unjustly...

Conversely, only in America can a man's rather lengthy history of marital infidelities actually catapult him to the top of the "conservative" heap. If no one would have predicted in early November that Joe Paterno would go from national hero to coaching curse in a matter of days, few foresaw that publicity from Newt Gingrich's "open marriage" would actually help him win the Republican primary in supposedly Christian South Carolina, while leaving Rick Santorum, the man all the evangelical leaders supported, in the dust. Of course, it remains to be seen if the darling of the debate, Newt, will again self-destruct, but meanwhile, the time for Santorum (the candidate who is often maligned for being too Catholic) to catch fire is now growing short. While it is only in heaven that souls like Santorum and Paterno usually get their fair share, I am not opposed to my wife's suggestion that we enlist some heavenly coaching help. Joe Pa, look down on your fellow servant from Penn State, and from one Nittany Lion to another, pray that January 22nd be remembered not as the anniversary of legal abortion, but as the day you, through the most pro-life candidate we've got, Rick Santorum, began to overturn Roe v. Wade and turn this country around.