Satan is attacking the great institutions of America, using the great vices of pride, vanity, and sensuality... -Rick Santorum, from a speech to Ave Maria University in 2008

[Romanus] made a pilgrimage to the reputed spot of the martyrdom of St. Maurice, and...healed two lepers along the way. News of this miracle reached Geneva...and the bishop and all the townspeople turned out to greet him. -from Butler's Lives of the Saints on St. Romanus of Condat

On the outbreak of the First World War....[Fr. Brottier] enrolled as a volunteer chaplain and spent over four years on the front. He flung himself into the most dangerous situations, ministering to the sick and dying...almost miraculously [surviving] in positions where the average life expectancy was measured in weeks rather than months. -from Butler's Lives of the Saints on Bd. Daniel Brottier 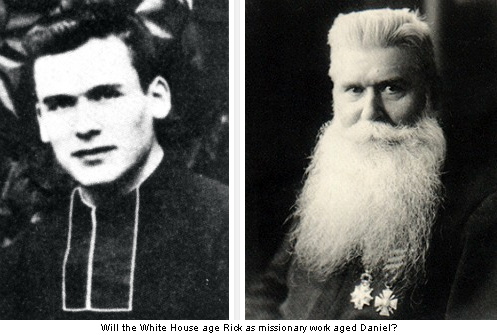 During Wednesday's (Ash Wednesday's!) Republican debate, Rick Santorum was attacked (among other things) for his 2008 claim which thirty years ago (remember Ronald Reagan?) would have been cheered, but even today every devout Christian knows is true; that Satan is alive and well and thriving in America. As his Republican opponents (especially Romney and Paul) conspire with the Obamanites and the MSM to "paint" (remember the ad!) Rick's Catholic Christian conservatism as mean and extreme, let's look ahead to what heavenly help Santorum can look forward to against the powers and principalities Rick must overcome to win next Tuesday's Arizona and Michigan primaries.

But before we preview February 28's pivotal battles, first we'll take a look back to see how Santorum's saintly strategy has worked thus far. Indeed, while most secular pundits saw Santorum's February 7 triple upset victories in Missouri, Minnesota and especially Colorado as incredible, the followers of the saints saw Rick's hat-trick as almost inevitable. Not only was Santorum's patron saint, St. Richard, one of the February 7 saints of the day, but just as Rick has his kids helping his campaign, King St. Richard also had three saintly children, sons Sts. Willibald and Winnebald and daughter St. Walburga, working for him. And, although I am a bit more of a White Sox fan than a diehard "Cub," anyone familiar with that North Side Chicago baseball team, knows they hang "W" flags outside whenever they win, and the three wins from St. Richard's three "W" saints are too much a coincidence for even Mitt's team to not "catch" on to.

But next Tuesday, say Romney, Newt and the perpetual candidate Paul, is a different story. Not only does Santorum have no patron saints in his starting lineup that day, but two of his big hitters Saint Oswald of Worchester (a humble monk who was called to be the only simultaneous bishop of Worchester and York) and St. Hilarus (who, for courageously defending the Holy See against the dissident Bishop Dioscorus, was elected pope while still a deacon) are celebrated on February 29 during leap years, and thus are benched until the next day. But when you have the Triune God, something that Romney does not believe in and Paul would have the states vote on, to manage your teammates, even the bench players can deliver when called upon. 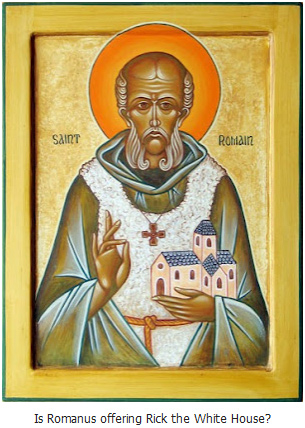 Tuesday's first saint, Romanus of Condat, was a humble hermit who modeled his community after the teachings of the desert fathers. This seemingly made Romanus the perfect patron for Rick in Arizona, but just as Santorum found that he had to modify his "No Child Left Behind" stance if he was to reform education, Romanus found the light clothing worn by the desert monks unsuitable for the cold nights in the Jura Mountains between Switzerland and France. So they switched from sheets and sandals to animal skins (the sweater vest of the 5th century) and wooden clogs, and their sanctity succeeded. Despite the MSM's snickering about Santorum's religion, if Rick, like Romanus, could heal some sickly lepers (or even a CNN debate anchor) I think Romney would finally be toast. In the meantime, his intercession should do.

Still I think the unsung hero saint of that day who could put Santorum over the top Tuesday is Blessed Daniel Brottier. At 23, Daniel was ordained a priest in the Missionary Congregation of the Holy Spirit, the perfect order in this instance because it invokes the Member of the Trinity that the Mormons do not believe is God. Besides his aforementioned "miraculous" stint on the WWI front, where Brottier attributed his survival to the intercession of St. Therese (a favorite of the O'Toole household, since she helped save the life of our only daughter, Therese, during a rough pregnancy) but he spent eight years as a missionary in Senegal, Africa, where the natives he baptized helped him build a cathedral in Dakar. These experiences not only make Bd. Daniel the right man to help Santorum with his foreign policy, but also to keep the candidate safe while campaigning on the streets of downtown Detroit or at the Arizona-Mexican border.

But the most striking similarity of Bd. Brottier to Sen. Santorum is the fact that Fr. Dan spent the last thirteen years of his life (he died Feb. 28, 1936) ministering to orphaned and abandoned children, virtually the same neglected (by Obamacare) group that got Rick into the race in the first place. Finally, since being a "blessed" means Daniel Brottier is still one step, one miracle, away from sainthood, this should also give him all the more incentive to intercede for Santorum. I'm not sure if Santorum winning Tuesday's two primaries would be enough to get Bd. Dan numbered among the saints, but if he kept it up through the nomination and general election...let's just say his favorite saint, the ever-popular St. Therese, would have nothing on him.

Protestants and ill-informed Catholics (such as those who voted for Obama in '08) must remember, as 2nd century Christians did on the first dies natalis ("birthday into heaven") of St. Polycarp (perhaps the first saint to be thus celebrated) that, in their words "we can never forsake Christ, who suffered for the salvation...of the whole world, or worship anyone else. To Him...we offer adoration, but to the martyrs, as disciples and imitators of the Lord, we give the love they deserve for their unsurpassable devotion to their own King and Teacher: may it be our privilege to be their fellow-disciples." Currently, the Obamanites mock Rick because they think Satan is not real, and the Romneyites slam Santorum because they fear the devil IS, and they are afraid their lie-laced negative ads will soon convict them of colluding with Satan, the Father of Lies himself.

Blessed Daniel and St. Romanus stand ready. Are we ready to stand as their fellow-disciples, and together adore Christ as we pray for Brother Rick, as he walks through the Valley of Darkness on his way to bring Light to White House?

You can join in Adoration for Santorum here.