Victor Sharpe
The camel's nose is in the tent 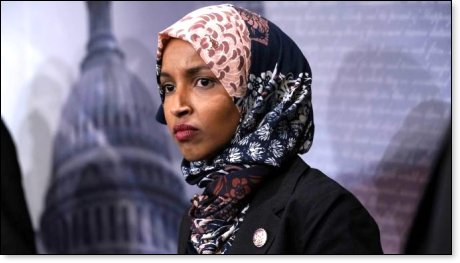 There is an old saying, originating in the Middle East, that if you allow the nose of a camel into your tent, soon its entire body will enter and possess it.

Omar, along with Rashida Tlaib (D. MI) are two Muslim ingrates who were given sanctuary and freedom in America – Omar from the hell of Somalia and Tlaib from the repressive and corrupt Palestinian Authority. They are joined with a rag bag of Socialists and Muslim radicals poisoning Congress and attacking our Judeo-Christian civilization, which has been the bedrock of America and the underpinning of our increasingly beleaguered Constitution.

Congresswoman Ilhan Omar has proven again and again that she is unfit to serve the American people and does not represent our values As reported by Act for America, "while speaking at an event for the Council on American-Islamic Relations (CAIR), a designated terrorist group, Rep. Omar made a false and grossly offensive statement claiming that CAIR was founded post-9/11, because they recognized that some people did something.

"First and foremost, CAIR was not founded after the Islamic terror attack upon us on 9/11. It was actually founded 7 years earlier in 1994."

Omar arrogantly dismissed the horror of 9/11, and the culpability of its Muslim perpetrators, as if the horror was of little or no consequence. As Act for America also pointed out: "The fact is, 9/11 was the largest and most deadly terrorist attack on American soil in United States history. Nearly 3,000 innocent Americans lost their lives to 19 Islamic terrorists on that tragic and infamous day."

How utterly detestable then that this Muslim ingrate, Ilhan Omar, who was so dishonorably rushed into the prestigious House Foreign Affairs Committee by the lamentable Democrat Speaker, Nancy Pelosi, should so immediately insult the American people by dismissing out of hand the atrocity of 9/11. She has no business being in Congress or on any Committee.

Remember this is the same Ilhan Omar who flaunts her hijab as a paean to Islamic triumphalism and who recently refused to condemn Hamas terrorists for deliberately firing missiles into Israel and destroying homes of civilians. And what of Rashida Tlaib who took the occasion, on the day she was sworn into office to represent Michigan, to wrap herself in the flag of an enemy of the United States, the flag of the so-called Palestinian authority. Is this loyalty to America?

Omar and Tlaib immediately took the occasion of their entry into Congress to spew their hoary old Arab anti-Israel propaganda, including pejoratively describing Jewish towns and villages in Judea and Samaria as "settlements" in what they deceitfully call "occupied Palestinian territory."

Judea and Samaria, also incorrectly called "the West Bank," is the ancestral Jewish heartland whose Biblical and post-Biblical history spans millennia. It is not "occupied Palestinian territory." But then these two hijab wearing hatemongers, Omar and Tlaib, while endlessly spewing anti-Israel propaganda, continue to defend many of the worst inhumane passages found in the Koran. They are, alas, programed to do so from birth.

Today's Israel and Jordan, were part of the Ottoman Empire from 1517 until 1917. After the end of WWI, the League of Nations agreed to set aside this portion of the former Ottoman territory to be held in trust by Britain to become a national home for the Jewish people.

The British Colonial Office, however, in 1922, soon after being entrusted by the League of Nations with the newly formed Palestine Mandate, arbitrarily tore away from the Mandate the huge area east of the River Jordan and gave it away to Abdullah bin Hussein. This territory consisting of 80% of the Mandate was called Trans-Jordan and eventually became the present day Kingdom of Jordan. The remaining mere 20% of the land that was left west of the Jordan River and the Mediterranean, (a width of some 40 miles) including Judea and Samaria, was all that remained for an eventual Jewish state.

The British, hoping to ease endemic Arab violence against the Mandate, which expressed itself against both Jews and the British rulers, further abandoned their responsibility to the Jewish people and tried to throttle Jewish immigration, before, during and after the Holocaust. At the same time, British officials had averted their gaze and allowed thousands of Arabs from surrounding areas to illegally flood into the territory. These Arabs became the majority of the so-called Palestinians of today.

In November 1947, the UN – which had assumed the obligations of the League of Nations – passed a resolution (UNGA 181) recommending the partition of the Mandate into a Jewish and Arab state. That would be a second partition of the original land set aside for a Jewish state and the hyperlink is from my original American Thinker article from 2009. It is now 97 years since that first and infamous partition took place and 72 years since UN Resolution 181, which the Arabs rejected and brought years of misery and terror.

The Palestinian Jews reluctantly accepted this truncated state as a desperately needed refuge for the surviving Jewish remnant after the Holocaust, and also for the 800,000 Jewish refugees in 1947/48 who were being cruelly driven from their ancient homes throughout the Arab world. These are the Jewish refugees that few in the world ever discuss.

Israel was reborn in 1948. but the Arabs and the Arab League, however, wanted all the territory to be under Arab sovereignty and rejected the resolution, choosing instead to wage a war of genocide against the fledgling and impossibly small and nearly indefensible Jewish state. Miraculously tiny Israel defeated the combined armies and might of seven Arab countries.

A great book, The Bible as History, written by the Christian writer, Werner Keller, proves – as if proof was needed – that the Muslim Arabs have no claim to the ancestral homeland of the Jewish people. Another book, also by a Christian writer, Joan Peters, titled "From Time Immemorial" shatters and debunks the Arab propaganda that millions of people have sadly come to believe in. Her book attests to the unassailable, millennial and spiritual attachment of the Jewish people to Jerusalem and to all the land west of the River Jordan; especially Biblical Judea and Samaria.

One of our most beloved presidents was Ronald Reagan who, early in his presidency, gave a talk in which he declared unequivocally, "Israel and Jordan are the two Palestinian states envisioned and authorized by the United States." Reagan also confirmed and said: "Jordan is now recognized as sovereign in some 80 percent of the old territory of Palestine."

What Reagan was saying was something that every historian of the Middle East and every so-called "expert" on Israel knows but sadly are too often afraid to say because of virulent Muslim and Arab propaganda, often laced with personal threats: It is that the artificial state created by the British Colonial Office in 1922, and now called Jordan, sits upon 80% of what was the original geographical territory of Palestine.

No such kingdom called Jordan ever previously existed, just as no sovereign independent state called Palestine has ever existed throughout all of recorded history. Jordan is today's Palestine.

President Reagan understood that the demand to create yet another "Palestinian state" in ancestral and Biblical Jewish Judea and Samaria would reduce what's left of the Jewish state to an indefensible country a mere nine miles wide. Can any of us imagine living in a state only nine miles wide surrounded by savage and hate-filled neighbors?

But even this would not satisfy the likes of Ilhan Omar and Rashida Tlaib. No, they want to use their insidious power and influence within Congress to first destroy Israel. Then they will work from inside, allied with the Muslim Brotherhood, to destroy America by strengthening the creeping stealth jihad. We must not allow that.

Beware of the Camel's Nose in the Tent.