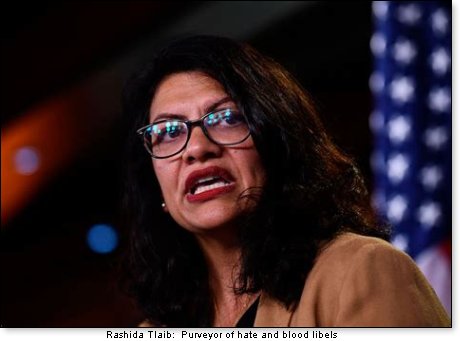 The Democrat representative of Michigan in the House of Representatives is Rashida Tlaib who spends her time as part of the disreputable group of house Democrat women who call themselves the Squad.

Mark Levin, Conservative Radio host and consummate expert on the U.S. Constitution, says this of the so-called Squad. “This is not a Squad. This is a cabal of Marxists who hate this country – some of them first, second-generation immigrants into the country, who bring their attitudes, who bring their indoctrination into the country and are at war, right there in the halls of Congress, against our own country."

But Rashida Tlaib who, as a young Muslim Arab immigrated to America with her family, goes even further. She has a self-corrosive hate for the State of Israel, which she endlessly spews whenever and wherever she can. Along with fellow Muslim House representative, Ilhan Omar, their output of religious bigotry against the Jewish state has become a hallmark of shame in the United States House of Representatives,

Now Representative Tlaib has introduced a loathsome resolution which falsely and outrageously accuses Israel of causing a ‘catastrophe’ for the Arabs who call themselves Palestinians on the day the reborn Jewish state declared its independence and became a recognized and sovereign state and member of the United Nations. She calls it by the Arabic term, ”Naqba.”

But what she hides is that as Israel declared its independence on May 14, 1948, five Arab armies immediately invaded the Jewish state’s tiny territory. The armies came from Egypt, Transjordan, Syria, Lebanon and Iraq, along with military detachments from Saudi Arabia and as far away as the Sudan.

This immense Arab military power was from Islamic states whose populations in the millions dwarfed those of tiny Israel, which at that time was a mere 600,000, including the pitifully few Jewish survivors from the Holocaust or impoverished Jewish refugees who had been driven out of Arab Lands where their ancestors had lived for 2,500 years. Indeed, some 820,000 destitute Jewish refugees would be expelled from Arab and Muslim states and 586,000 of those were subsequently given refuge in the embattled Jewish homeland in later years.

In contrast, the number of Arab refugees who needlessly left for neighboring Arab states was estimated at the time by the UN Mediator on Palestine at 472,000 and that only 360,000 of them required support. That part of the Arab population who did leave, as the Arab League ordered them to do, believed that they were merely removing themselves to safety while the triumphant Arab armies would be free to exterminate the Jewish population and steal their homes and farms. As one Arab refugee was quoted as saying in the Jordanian newspaper, Ad Difaa (September 6, 1954). “The Arab government told us: “Get out so that we can get in. So, we got out, but they did not get in.”

What the disreputable Rashid Tlaib hides from her bigoted resolution was the avowed intention of the Arab League and its Secretary General, Azzam Pasha, to utterly wipe out the nascent Jewish state and massacre its population, men, women and children. He declared that “This will be a war of extermination and a momentous massacre which will be spoken of like the Mongolian massacres and the Crusades.”

But miraculously the few defeated the many.

Rashida Tlaib and Ilhan Omar, even as they hide the reality of the Arab aggression which caused the Arab defeat, nevertheless continue hurling from their mouths lies upon lies. Their so-called “Naqba” was the result of the Arab world’s own genocidal aggression against Israel.

To begin with, no such thing as a sovereign independent Arab state called Palestine has ever existed in all recorded history and you will look for evidence of it in vain. The land of Israel, in contrast, yields Jewish archaeological antiquities dating back some 4,000 years with Biblical sites going back to the time of Abraham. For instance, in Hebron, one of the four holy Jewish cities in Israel, the others being Tiberius and Safed with Jerusalem as the jewel in the crown, you will see the shrine covering the ancient Cave of Machpela where Abraham purchased burial plots for his family from a Hittite.

Below is just one of the enormous numbers of Jewish Biblical and post-Biblical archaeological sites to be found throughout Israel. This is the Israelite city of Tel Gezer with its gate built by King Solomon some 2,850 years ago. 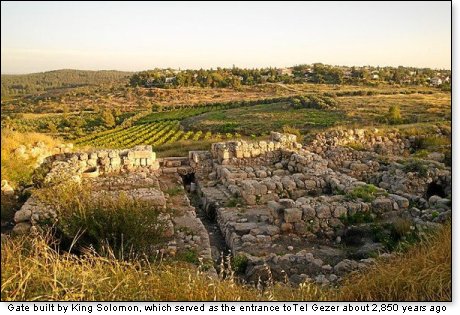 As I point out in the four volumes of my work titled, Politicide: The attempted murder of the Jewish state, the Middle East was divided by the Principal Allied Powers at the San Remo Conference on April, 1920 between a proposed Arab nation and a Jewish nation. The Arabs were granted independence after the end of the First World War throughout the entire Middle East, except for what became British Mandatory Palestine. That territory, on both sides of the river Jordan, was designated to constitute the national home for the Jewish people.

But in 1921, Great Britain unjustly carved out a new Arab state called Transjordan from the territory of geographical Palestine. The territory east of the river Jordan stretched all the way to the eastern boundary of Mandatory Palestine, a border that would separate it from what was to become the future British-created state of Iraq. Britain presented this gift to Abdullah, the son of the Hashemite tribal chief and Sherif of Mecca, as a consolation prize for their contribution in helping defeat the Turks. However, even T.S. Lawrence (of Lawrence of Arabia fame) later described the Hashemite role in derisory terms as, “a side show of a side show.”

This was a shameful betrayal of the earlier 1917 Balfour Declaration and constituted a loss to the proposed Jewish homeland of two thirds of the land mass earlier promised by the British Foreign Office. On November 29, 1947, the Arabs living in British Mandatory Palestine were offered a substantial part of what was left of the Jewish National Home by the UN General Assembly (Resolution 181). The Jewish representatives reluctantly accepted the further loss of territory because of their need to provide an urgent refuge for Holocaust survivors and for the growing number of Jewish refugees arriving traumatized and penniless from Arab states. The Arabs, however, rejected the offer from the UN and thus chose to invade the newly reborn Jewish state for the purpose of obliterating it. They failed. 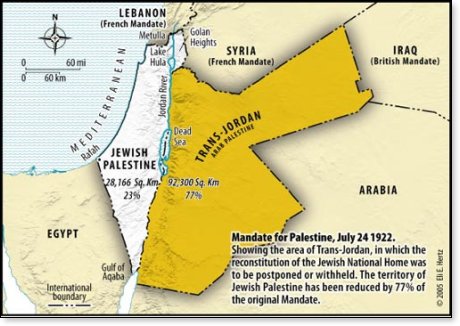 The fact is that though the endless Arab aggression may always appear to be a dispute over borders, in reality it is a religious war and the Arabs, so long as the overwhelming majority remain Muslim, will never accept the existence of a non-Muslim state in territory previously conquered in the name of Allah – whatever the size or shape of its borders. This is especially so of the fraudulent Arabs who call themselves Palestinians who will never recognize or accept peace with Israel.

As mentioned, Arab armies responded to Israel’s founding with a call for genocide and their leaders continued with repeated wars and barbaric acts of terrorism for the sole purpose of killing Jews and destroying the world’s only Jewish state. However a growing number of Arabs are becoming disillusioned with the obduracy and barbarity of the Arabs who call themselves Palestinians.

Thanks to President Trump in establishing the Abraham Accords, several Arab nations are now drawing closer to Israel and moving away from their previous support for the Palestinian terrorist entity, be it the PLO, the PA, Hamas, Islamic Jihad, ad nauseam. But President Biden and his handlers and leftovers from the Obama regime continue to support the so-called Palestinian Authority under the malign leadership of the Holocaust denying, Mahmoud Abbas, who has remained in power well beyond his original term. The Biden Administration continues to pour millions of taxpayer dollars to Abbas who then uses it to pay his terrorists to murder Israeli civilians. This is blood money.

While Rashida Tlaib verbally delegitimizes Israel in the US House, the Arab terrorists who call themselves Palestinians incite hate, violence, and commit horrific acts of terror against Israeli civilians. Tlaib has a “history of antisemitic remarks” in Congress and the real catastrophe is that we have reached the point that this hate-filled Democrat has introduced a vile resolution which is an indelible stain on Congress. It is a direct result of the failure of the House Democrat leadership to act against anti-Semitism, even as it increasingly festers during the past three years.

It is long overdue for Nancy Pelosi, the Speaker of the House of Representatives, who has promoted and protected the squalid Squad, to not merely issue resolutions condemning anti-Semitism, but to lead the House in censuring those who spew it, such as the members of the infamous Squad: Rashida Tlaib and Ilhan Omar.

As Ari Lieberman pointed out in a recent article, “Tlaib’s reckless and malevolent tweets, where she instinctively and falsely blames Jews for murder and other capital crimes, belies a sinister intent. Even more troubling is that Tlaib is a member of the U.S. legislative branch, and her words carry weight. Yet she continues to spew blood libels with near impunity and the deafening silence from her own Democrat party should sound alarm bells.”