One obvious reason our enemies are stepping up pressure and possibly preparing for eventual attack on America is that our new president's missteps in his on-the-job training at the White House expose weakness in a dangerous world.

What else can other nations believe when President Obama seems to think he can charm the Taliban? (What? Without his teleprompter at the negotiating table?) No wonder our adversaries see an Achilles' heel when the White House hints at scrapping our missile shield plans for Eastern Europe if only Vladimir Putin (no friend of the U.S.) can somehow persuade Iran (whose regime despises us) to back off its hostile nuclear ambitions.

Again, the Chinese seem to have us right where they want us. In one hand, the People's Republic of China (PRC) holds a huge chunk of America's debt. With the other hand, she builds a military machine far beyond what would be required for her defensive needs. China's People's Liberation Army (PLA) sees the U.S. as "the main enemy," believes war with the U.S. is "inevitable," and is building a machine that can target U.S. cities.

And let us not even imagine that China sees us as anything but a pushover, when the president appoints as Chairman of the National Intelligence Council Chas Freeman, who has said China's brutal crackdown on dissenters at Tiananmen Square in 1989 was "overly-cautious." The fact that negative publicity led Freeman to withdraw offers little assurance. With Obama's mindset on foreign policy, future appointees to sensitive positions are likely to hold similar views, albeit without the paper trail. That Obama terrorist pal Bill Ayers or his wife Bernadine Dohrn didn't end up as Homeland Security Secretary may simply mean we barely dodged the bullet.

On top of that, North Korea's Stalinist government threatens a war if anyone attempts to shoot down what appears (as of this writing) to be the planned test-firing of a long range missile. The outlaw Red regime once threatened to reduce free South Korea to debris unless it stopped civic groups from dropping anti-Pyongyang leaflets offering moral support to the starving millions in the dictator Kim Jong-Il's slave state.

We have been warned

Going back many years and almost forgotten by the general public  but very much on the radar at the Pentagon and our Space agency  China blew up her own satellite, whose estimated (by specialists on Inhofe's staff) 150,000 pieces of debris in space are traveling at such a speed that if we put a shuttle up, one of those pieces could cut through our shuttle or the international space station.

Even after all these years, Senator Inhofe says, China knows that outer space debris reminds us that they can shoot down a U.S. satellite, as well.

"What happens in America if they shoot down our satellites?" the senator continues, "That's the power that China has." Not only to bring our civilian communications to a halt, but then to leave us in a highly compromised position if we need to defend ourselves.

"Every tank that we have, every piece of artillery that is fired from an airplane is tied into this system," the Oklahoman  a senior member of the Senate Armed Services Committee  tells this column in an interview. Considering the threats to America, "you can argue that [this] is the worst possible time to have an Obama in the White House. Right now, the only thing [Obama is] cutting is the military."

All programs aimed at shielding America from her enemies "are in jeopardy," the senator says.

Alas, it gets worse

China can shoot down our communications satellite, our overhead imagery satellite. The Communist giant can take "anything out of the sky," according to an Inhofe aide, who did not disagree when I suggested that an enemy  by blowing up a U.S. satellite  can take us back to the late 18th century. So much of our infrastructure and also our way of life is wired to satellite technology.

We take for granted that we can forecast the weather, but if we don't know if or when a hurricane is coming, we would be unable to prepare for that. And then consider that hospitals would not be able to communicate with each other. You can let your imagination run wild in positing the life-threatening scenarios here on earth in these United States.

Airlines are able to use the Global Positioning System. Take out the GPS  which is now used to land aircraft, our ability commercially to fly air travelers. Potentially, "you could run aircraft together or not be able to land at certain locations," according to an aide to Senator Inhofe. (The senator himself is licensed to fly commercial aircraft).

Militarily, they could "shut our eyes" and take out our ability to verify and monitor what it is going on. The Chinese are very secretive. If the U.S. suddenly is without ability  through satellite technology  to listen and watch, even a partial advantage would elude us.

China has been stealing us blind through espionage at our weapons production and lab facilities. Her latest announced military budget is pegged by the Chinese themselves at $70 billion. That's the official figure. But Senator Inhofe's office estimates the actual figure to be about three times that, or more like $200 billion.

With all that staring us in the face, America's top diplomat boldly confronts the Chinese with what amounts to a feather, and intones the diplomatic equivalent of, "Now, you be nice boys, and don't dirty the air." 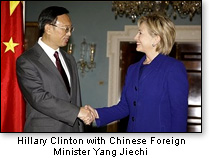 Not a word about missing prisoners in China, possibly including Americans. No serious discussion about China's outright mandated butchering abortion practices (No "pro-choice" there, right?). Nothing said about the outright hostility inherent in China's security threats to the United States. No, what Secretary of State Hillary Clinton discussed with the Chinese was the question of "realigning" our relationship on issues such as "climate change," and energy.

If that is the Obama administration's idea of the actual extent of our problems with China, then we are in bigger trouble than we imagined. Climate change? That's our "China problem?"

Senator Inhofe shakes his head is despair. "The argument," he says, "is that if you believe that man-made gasses...are causing global warming  if you really believe that in your heart, and some nice people do  then why could you say that we would [counteract it] unilaterally in the United States? Because all this will do is chase our jobs [to] where the energy was  and that would be China, or Mexico or elsewhere, where they have no concern about their [climate] initiatives [and were not pressured to sign the Kyoto global warming treaty]."

So Hillary tried to convince the Chinese that they need to be worried about CO-2 emissions.

"China is laughing at her," the senator opines, "because that's how they [the Chinese] get jobs right now. They're getting all the American jobs [as they are building]  the last I heard  a coal-fired plant every week."

Right, and back here in the USA, we have a president who has threatened to shut down our own coal industry, and admits his "cap and trade" global warming legislation will cost consumers, as Americans anxiously eye the daily plunge of their retirement portfolios or nest eggs for a hoped-for "worry-free" retirement.

Thankful for crumbs of reality?

At least Secretary Clinton did not appear to be as naive on North Korea as she is on China. At a news conference with the Japanese foreign minister, she said North Korea's possible missile launch "would be very unhelpful in moving our relationship forward." 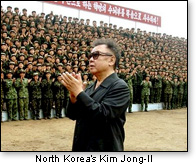 Normally we could cherish the small favor of Mrs. Clinton's brief awareness of danger  however guarded her expression. But then one remembers how her husband's administration greased the skids for this mess in the first place. The Clinton regime in the nineties, after meetings in Pyongyang, simply pulled a copout by suddenly endorsing (without any agreement on verification) North Korea's solemn word that it would not make dangerous nukes. That was "unhelpful" too.

But it fit the Clinton era of "See no evil"

Senator Inhofe recalls that in the Clinton era, security badges were eliminated at the Department of Energy under Secretary Hazel O'Leary. And of course, Clinton campaign contributor Barnard Schwartz (of the Loral Corp.) got the green light  through a waiver granted by President Clinton  to improve the precision and reliability of Chinese satellites and nuclear missiles. Thus the then-president undermined 50 years of technological export restrictions. It is believed the Chinese are capable of targeting between 13 and 18 U.S. cities. No inside knowledge as to whether they actually have targeted the cities, but the capability is there.

Inhofe: on China's case for years

Senator Inhofe in 2005 delivered a series of speeches on the floor of the Senate wherein he sounded the warning: "Some experts believe that China's economic policy is a purposeful attempt to undermine the U.S. industrial base, and likewise the defense industrial base."

During the post-Cold War 90s, Inhofe told me, the Clinton administration was content in essence to let the good times roll and sharply cut back on spending for the military. At the same time, the senator adds, the Chinese "increased their military procurement 1000%."

The more things change, the more they...

More Obama Clintonian déjà-vu : The president's choice for Commerce Secretary is former Washington State Governor Gary Locke. Governor Locke has been tied to the Chinagate scandal that steered money to the Clinton-Gore campaign in the nineties.

"No, he [Locke] should not be Commerce Secretary," Senator Inhofe replies to our question. In fact, the Oklahoma senator lacks confidence in any of the other Obama cabinet picks, with the exception of Transportation Secretary Ray LaHood.

Some people say the biggest threat comes from North Korea or Iran. While they are not to be underestimated  as we noted above with North Korea  "I've always said it's China," Inhofe says, "because they have the [military] capability and they have the money." Some enemies have one or the other. China has both.

China is also making inroads around the world  arming or in other ways assisting Iran in her nuclear ambitions, but also adding lesser-known rogue states such as Sudan (where China is the biggest arms supplier) and Zimbabwe, whose bloodthirsty dictator Mugabe is destroying his country. China has sold him $240 million in fighter jets. Zimbabwe does not need fighter jets. China is Zimbabwe's largest investor and second largest trading partner. Bolstering these bad guys is an act that is overtly hostile to the United States.

On-the-job training costly to the U.S.

As our green-behind-the-ears president repeats errors of the past in dealing with threats to America (and then adds a few of his own), he may be learning the hard way that there are some problems no president of the United States can hope to solve with a simple reading of the teleprompter.