March 25, 2010
It's hard to decide the best historical metaphor for Bart Stupak  the "pro-life Democrat" who caved to Marxist-style pressure and gave Speaker Nancy Pelosi the votes she needed to destroy America with "Obamacare." 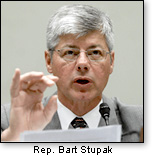 Is he Neville Chamberlain or Judas Iscariot? Which?

What about that worthless scrap of paper that President Obama granted him in the form of an "executive order" that does nothing about abortion other than to reaffirm what was already in the Senate bill  the very bill that Stupak had repeatedly declared "unacceptable"?

That piece of trash over Obama's signature has all the credibility of Hitler's written promise of "peace in our time" that a giddy Chamberlain waved at a cheering crowd. Or perhaps the executive "order" (Wink! Wink!) takes on a symbolism for Stupak not unlike the Chamberlain umbrella forever etched in the minds of historians.

Congressman Stupak couldn't take the heat. The George Soros-backed thuggery deployed tactics right out of the Saul Alinsky Rules for Radicals playbook  harassing members of his family to the point where they had to disconnect their phones to head off the 3 am threats. Stupak  a former highway patrolman  knows of these tactics and was fully cognizant of the ways in which he could have seen to it that his family was protected. A couple of columns back, we posed the rhetorical question as to whether this ex-cop was about to be snookered. Unfortunately, our nagging suspicion was confirmed.

So in the end  as many had predicted  the Michigan Democrat caved and brought eight other cowards with him. They gave Pelosi the votes she needed. Without them, the 2700-page disaster would not have passed. That betrayal is beyond Chamberlain's naiveté. The executive order is Stupak's thirty pieces of silver.

Sharing in the Stupak sellout were "Blue Dogs" Joe Donnelly (Indiana); Steve Driehaus (Ohio); Marcy Kaptur (Ohio); Nick Rahall (W. Virginia); Allan Mollohan (W. Virginia); Kathy Dahlkemper (Pennsylvania); Jim Cooper (Tennessee); and Paul Kanjorski (Pennsylvania). You can't call them stupid. They just think you are. This doesn't even rise to the level of a fig leaf. They knew what they were doing  looking for a fake move to give them a backdoor exit.

Myth of the "pro-life Democrat"

Just as soon as Stupak announced his Munich-like surrender on Sunday, the Eagle Forum's Phyllis Schlafly issued a statement declaring this as prima facie evidence that the term "pro-life Democrat" is an oxymoron  a "myth," if you will.

Did the "Blue Dogs" not recall that one of President Obama's first acts upon entering the White House was to repeal the Mexico City Policy and thereby facilitate the international funding of abortion? Or that their vote would provide "massive expansion and funding of abortion services?" Or that Obama "has lined every existing federal agency with the most dedicated pro-abortion ideologues?" Or that he will continue that pattern when it is time to fill the more than 100 bureaucracies created in the bill?

"Mr. Stupak and his Democrat followers have now clarified that you cannot be pro-life and be a Democrat," Mrs. Schlafly wrote.

Well said. But we would take that a step further.

Let's cut to the quick: The whole idea of "blue dog" or "moderate conservative" Democrat is one of the biggest political frauds ever perpetrated on the American people. Next to "global warming," it is arguably the biggest hoax since Woodrow Wilson's war to "make the world safe for democracy." Just as that war made the world safe for Lenin, Stalin, and Hitler  so too will Obamacare make America safe for those who would destroy our very existence as the most uniquely free nation on this earth.

In our center-right nation, blue dogs serve one purpose: to make Congress safe for Democrat control. Here's the way the sweet little racket works: Those pesky conservative-leaning congressional districts in Red State America are getting in the way of a Marxist America. So what to do?

No problem. Just send Rahm Emanuel out to recruit well-known "moderates" in those precincts to run for Congress as Democrats  but each as a "different" Democrat. They run as Democrats who are "pro-life" or "moderate" or even "conservative. In return, they are given to understand the moment they arrive in Washington that yes  Commissar Pelosi (even with her national popularity rating at an historic low of 11 percent) will give them permission to vote their district's conservative inclination until and unless she really, really needs their votes to push through her radical agenda. That's when they are expected to fold like cheap umbrellas at the crack of her whip.

That's when Stupak and his cohorts were corralled Sunday to cave in to worthless paper. Their votes were needed. As this column explained twice in the last week, the bravado and self-assurance the Dems exhibited to the public that the votes for Obamacare were in the bag was nothing but a head fake before the "blue dogs" finally fell into line. Dems did not have the votes  not until Sunday's White House Munich. Once again, the "blue dogs" did their duty as lapdogs and delivered for their boss in the White House. Yet again the "blue dog" miracle is pulled out of the magician's hat.

I'm willing to credit perhaps a half-dozen "blue dogs" as sincere "moderates." But even they are under relentless pressure to shed all principle when ordered by Commissar Pelosi. The message that sends? All blue dogs must be defeated in the next election. They are not to be trusted.

One such "blue dog"  Rep. Jim Matheson of Utah  was among the 34 Democrats who voted against the bill Sunday. Earlier this month (see this column March 8), we wrote about the judgeship that was offered Matheson's brother  a nomination announced the very night Obama was schmoozing Matheson and nine other "blue dogs" at the White House. Though Scott Matheson, Jr., is well-qualified for the judgeship, the timing looked like a payoff to get his brother's vote on Obamacare.

Congressman Matheson still voted no. Only he knows whether the pitiless publicity spotlight on the timing of his brother's nomination had anything to do with it. He vigorously denies that. Rep. Matheson was already cited as about the seventh most conservative Democrat in the House. Alas, given the socialist herd mentality in the Dem House caucus, that's not saying much.

What is less publicized is that Congressman Matheson had his chance to vote for real health care reform. But he turned his back on that opportunity. He voted no on a Republican alternative that would have reformed the health care system without resorting to a massive federal takeover.

Many Democrat "no" votes on Sunday were cast by lawmakers who played both sides of the street through other actions on their part. Voters fed up with BlueDog/LapDog "bait and switch" fakery will have their say come November.