Wes Vernon
The debt ceiling mess, and our House of Lords

July 18, 2011
In trying to cope with the debt ceiling, the Republicans are re-learning that the country cannot be run from Capitol Hill — not from both legislative houses, let alone one. Compounding the challenge is that one house — in this case Harry Reid's United States Senate — chooses to spin its wheels while doing — well, almost nothing. 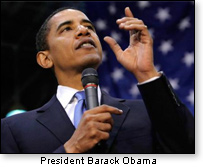 For all the public bloviating and hush-hush talks behind closed doors, the outcome is far from settled as of this writing. President Obama stipulated — late in the game — that tax increases must be part of any final deal. Republicans argue tax hikes only exacerbate the debt, and that focused, meaningful budget cuts must be part of any agreement for raising the debt ceiling.

The president intones that all he is asking is that "the rich" pay their "fair share" in taxes. Considering that the tax code is already skewed so that small businesses pay a healthy slice of the tax tab, and nearly half the populace pays no income tax at all, one strains for a non-elastic presidential definition of "fair share."

It is as if nothing was learned from the eighties when low taxes actually produced more revenue, not less.

Moreover, the White House and its liberal Capitol Hill allies are hoping that Republicans have learned nothing from the eighties or nineties when a government shut-down ultimately led to Newt Gingrich's demise as House Speaker; or when George H.W. "Read my lips" Bush's agreement to raise taxes denied him a second term; or when Ronald Reagan's "mid-course correction" on taxes was exchanged for Tip O'Neil's solemn promise that every dollar in increased taxes (immediately written into law) would be over-matched by three dollars in future budget cuts (which never happened).

There is a ring of familiarity in all this, and if the evil party's money magicians managed that old hat trick three times, why shouldn't they believe they can entrap the stupid party the fourth time around the bend?

As I write, Senate Republican Leader Mitch McConnell plans — only if all else fails — to introduce a proposal to allow President Obama to raise the debt ceiling by $2.5 trillion, but in three steps well into 2012. These would require the president to submit matching cuts in spending for Congress to consider. Congress could vote down the debt-limit increases, but the involved, multiple-step process would of course include the option of a two-thirds vote in both houses to override a presidential veto. 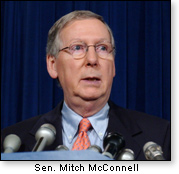 Does the trap backfire?

The McConnell plan has its share of skeptics, including conservatives who are wary of handing the president so much power on the ceiling. It also has drawn the opposition of some Democrats. They fear McConnell hath wrought an evil plot to saddle them with (gasp!) responsibility.

Note, for example, the statement of my senator (heaven help me!), Barbara Mikulski (D-Md.):

"It does nothing about reducing the deficit, and from the political standpoint, it dumps everything on the president and the Democrats," she complains.

Well, duh, Barb. The president has it well within his power to do something about the deficit by agreeing to serious definable cuts as a substitute for speaking vaguely about "sacrifices" while nixing specifics proposed by Speaker John Boehner.

Senator, if your president is serious about cuts (and also wants to avoid your perilous "political standpoint"), he might consider abandoning silly counter-productive ideas like extracting tax breaks for corporate jet-owners. That move would take 5,000 years to make a dent in the debt (according to Charles Krauthammer's calculations), but would likely throw airplane manufacturing employees out of their jobs in the next year. Air Force One alone is not sufficient to keep them employed.

Here is the record on substantive deficit action, Barb. Then you tell me who is "dumping blame" on whom and who is facing up to "the political standpoint."

All during the year 2010, the leadership in Harry Reid's Senate refused to come forth with a budget. (Ooooooh, no, they couldn't actually do their jobs. That might jeopardize their election year races.)

The House this year passed and sent to the Senate the plan by House Budget Chairman Paul Ryan that would have streamlined entitlement programs and imposed a jobs-creating tax reform. (Oooooh, no, Mikulski and her party colleagues couldn't vote for that. They "scrutinized" — for maybe five seconds — the Ryan plan and marched in lockstep to defeat it. 42 out of the 47 Republican senators voted yes. One of the GOP "no" votes was cast by Senator Rand Paul [R-Ky.], who did not think Ryan went far enough.

This week, the GOP House is set to vote on the "Cut, Cap and Balance" bill to reduce spending by $2.4 trillion over 10 years, mandate by law that there be a cap on spending, and pass a constitutional amendment stipulating that the president submit a balanced budget each year.

The measure is given virtually no chance whatever to pass Mikulski's nay-saying Senate.

Oh, but let's not assume the Senate has a plan of its own. I mean, how outlandish and daring can we be here? Again, in 2011 — as in 2010 — Harry Reid and Co. have produced no budget of their own, though of course, they are prepared to render their Olympian judgments on the debt ceiling efforts of serious people. (Oooooh! Don't you know we have 23 Senate Democrat seats up for election in 2012? We exist to be re-elected. We can't waste time doing the jobs our voters hired us to do. They might fire us.)

Michael McConnell, a professor of constitutional law at Stanford, writes — if you follow him in the literal sense — that all this evasive tomfoolery over the deficit actually puts the United States Senate in violation of the law.

In the July 14 Wall Street Journal, the good professor (BTW, a critic of the court ruling in Bush vs. Gore and the impeachment of President Clinton) writes the following:

"By April 1, according to the Budget Act, the House and the Senate must either adopt the president's budget or put forward an alternative. They cannot just hide in the weeds" (italics added). The Senate has opted for the latter. 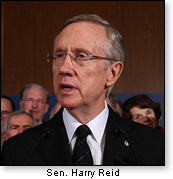 I don't know which cops would arrest Harry Reid, Barbara Mikulski and their colleagues for violation of this statute. But freshman Senator Ron Johnson (R-Wisc.) has threatened to bring the Senate to a halt until the Democrats in the majority formulate a budget. (Let's just call it the "Put Your Brand Where Your Mouth is" bill.)

One scurries to the official definition of the "upper chamber," a common definition of the Senate. Just what are its duties? Let's see, it refers here to existing "for some ceremonial purposes," and says the "upper chamber has the primary purpose of scrutinizing legislation proposed by the Lower House...." Hmmmm. Its members are officially referred to as the "Lords Spiritual and Temporal."

Oooops! I was reading about the British House of Lords. Sounds like our "world's most deliberative body," does it not? Since we are so hard up, might there be another line-item we could zero out of the 2012 budget? It is by no means certain that we can afford an American House of Lords.

Adult Americans may be excused if they have had it with elected officials who play Nyeh! Nyeh! political games and "hide in the weeds" as billions of dollars of debt are added onto the backs of our nation's children and grandchildren.