Wes Vernon
Members of Utah dynasties square off
BOOK REVIEW: Mormon Rivals: The Romneys, the Huntsmans and the Pursuit of Power

June 8, 2015
MORMON RIVALS: THE ROMNEYS, THE HUNTSMANS AND THE PURSUIT OF POWER

By Matt Canham and Thomas Burr 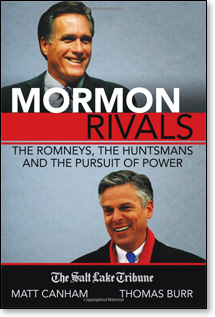 "Mormon Rivals?" Rivals? Not necessarily the same thing as "enemies," is it? From out of the Mountain West political journalists foresee the potential emergence of one and possibly two political dynasties, again from successful and politically driven families.

Following the Bush and Clinton dynasties of the past two decades, Mitt Romney and Jon Huntsman, both Republicans, "mix it up," this time in the politics of Utah, where they both have deep roots, though their fortunes largely originated elsewhere. Further, the next generation of Romneys and Huntsmans appear ready to pick up where Dad left off, possibly keeping the family dynasties going for years or decades.

The Romney versus Huntsman "warm-up" already featured Mitt Romney and Jon Huntsman Jr. among rivals in the crowded 2012 Republican presidential primary, though Mr. Romney was anointed by the Republican establishment to take on what turned out to be the losing fight against President Obama.

Despite his efforts to tamp down the rumors, Mr. Romney is making some moves that suggest he's keeping his options intact for a third run at the Oval Office. He briefly made a show of testing the waters for next year, and concluded 2016 would not be his time. The future may be another story.

In "Mormon Rivals: The Romneys, the Huntsmans and the Pursuit of Power," Matt Canham and Thomas Burr – political reporters for The Salt Lake Tribune, publishers of this book – outline the origins of the two possible dynasties out of a deep red state whose voters tilt right, but whose establishment seems most comfortable with "moderate" Republicanism. Prominent Democrats, as the minority party in the state, are nonetheless best represented in some parts of the local levels. The state's six-person congressional delegation is 100 percent Republican, The state legislature is top-heavy GOP; the governor is a Republican.

The Mormon Church, the dominant faith in Utah, has repeatedly claimed its position of partisan neutrality. The authors include a chapter detailing how Utah's political-cultural climate is affected. Both families are members of the church (sometimes observant in different ways). Some interesting information in that chapter is little known outside Utah and surrounding states.

Since the 2012 election, Mr. Huntsman has busied himself with activity in groups such as No Labels, which calls for all things beautiful and good and nothing mean and bad. That's an exaggeration, of course. But there is not a lot more specificity than that. One headline writer defined it as "No Labels=No Content." 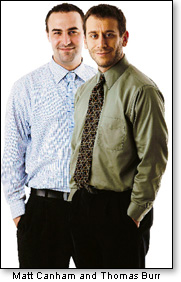 Partisanship, according to No Labels, is apparently a negative. Nearly every nation in the world has concluded that despite its drawbacks, categorizing the electorate around competing entities espousing a general philosophy or set of worldviews beats any other organizing methodology as a means of avoiding chaos and countenancing something like 30 candidates vying for one office, at least in the final round. Even our two-party system cannot always avoid a happening almost as confusing. Do we really need a near "free-for-all" that is even more semi-anarchical?

Mr. Canham and Mr. Burr tell their readers that Mr. Huntsman took over in 2014 as chairman of the Atlantic Council; little known outside of Washington and seemingly (from their explanation) a foreign policy "think tank" and "a stopping point for many future Cabinet members."

Mr. Huntsman Sr. has deemed the senator "an embarrassment." A hypothetical poll shows if Josh Romney, son of Mitt, were to challenge the senator's re-election next year, it would be 49 percent-36 percent in Mr. Lee's favor. Young Mr. Romney disclaims interest in 2016. Perhaps in the future, he says.

Mr. Huntsman Jr.'s most consistent credentials are in foreign policy and as an executive, including two-time ambassador, former deputy trade representative and governor of Utah (a position won with 78 percent of the vote).

Among his "free at last" comments considered by Republican loyalists to be unsettling is the fulsome praise he has heaped on Hillary Rodham Clinton. Even considering that Mrs. Clinton was his boss when Mr. Huntsman was ambassador to China, they seem over the top for a Republican.

Mr. Romney's strengths include his well-known successes in the world of finance, including Bain Capital, where he helped turn around enterprises toward solvency and, of course, the Salt Lake Olympics in 2002. In politics, though he lost a race for the Senate against Sen. Ted Kennedy, he won the votes of liberal Massachusetts for governor.

Both Mr. Romney and Mr. Huntsman stand to make the history books, complete with their pluses and minuses. Here's the record as reported by the authors. (I know one of them, Thomas Burr, through our National Press Club membership, and in covering Utah politics in different eras).